My name is Anne and I come from Sweden. I started to practice Falun Gong in 1995.

In August 1999, I received a scholarship to study Chinese for one year in Dalian (a harbour city in the east part of China). Before I left Sweden, some of my friends advised me not to make any contact with fellow practitioners in China. I listened to their advice because I didnt want to make any trouble for them. But I felt very lonely and I did miss my fellow practitioners. I also was very concerned to know how they were. I knew that they had gone through a lot of tribulations; losing their jobs, being dismissed from schools and being sent to jail, detention centers and re-education centers, etc. The only way for me to find out how they were was to contact them. Although my Chinese language was not so good, I could understand from the radio and TV and all the newspapers that only fake reports, about Falun Gong. were propagated all the time. They were shown on the streets, in bookstores, at workplaces and in the army. Even the teachers at my school propagated it. Foreign students had to listen to the same propaganda as the rest of the Chinese people.

When I received an e-mail from a friend of mine who informed me that some practitioners from overseas were in Canton (located in south of China). I decided to meet them. I took two days off from school, left Dalian in the early afternoon on November 24th, and arrived in Canton in the late afternoon. The weather was hot there, compared with Dalian. Some friends met me at the airport and they took me to an apartment. I was very happy to meet some of my friends there and we had a very good talk. That evening I was not tired at all, listening to what some of the practitioners had gone through. The truth about how they were ill treated never reached us and it didn't come out in the society.

Around 2:30 AM on November 25th, a big group of 15 policemen rushed in, some in uniform and some not. There were more policemen outside the apartment. They were surprised to find me, a westerner. They had to find somebody who could handle a case in which a foreigner was involved. Meanwhile we just had to wait. They took pictures of the whole apartment and also of the Falun pictures etc. A lady who spoke English started to question me about my name, where I came from, what I did in China, why I came to Canton, who I knew, and when I came. She did not believe I had just arrived. She told me they have a regulation stating that a foreigner should report to the local policestation within 24 hours if he/she stayed in a Chinese house. I have never heard about this rule. But I didnt break the rule either because I had only been there 8 hours. She didnt believe me, so I had to show my ticket. She also wanted to check my passport. In my passport it was not stated if I was allowed to stay in China. She told me again that if I didn't have the special card showing which visa I had, then I was staying illegally in China. I had all these documents. She took them all and didnt give it back to me. Some practitioner asked why they wanted to arrest us. They just looked very serious and didn't give us any answer. The practitioners were very brave. We asked the policeman to let us take a photo of ourselves (See the photo attached).

After an hour or so, the lady who could speak English asked me to follow her. I had to go alone into a van together with four policemen. The time was around 03:30 AM. I asked where they would bring me. They told me that they would bring me to the policestation. At that moment I actually didn't know where they were taking me. When I arrived at the station, some of my fellow practitioners were already there. They brought me to a room and I drank a half glass of water. The lady started to ask question. I didn't want to answer any question before I could speak with the Swedish embassy. I told them that I had the right to contact my embassy. But they told me that I was now in China and I didnt have any right to contact the embassy. I asked the policeman again for permission to contact my embassy to check if what they said was right. They refused. I was told that I was now in China and had no right to contact the Swedish Embassy in their country. After some time, I thought to myself that as a practitioner of Falun Gong, I had nothing to hide and I could tell them the truth. So I answered them when they asked me again my name, where I came from, how I came and why, who told me to come, whom I know, how I contacted the person, when I came in contact with Falun Gong, etc. They wrote a report, three pages altogether, and then they took two photos of me. I was asked to sign the paper. I really didnt want to do that, but I had to. After I signed, I felt very sad. I felt my right as a practitioner and as a human being was violated. Later on in the afternoon, I actually took the report and tore it in two. This made them angry with me and they took the report away. I was there alone with 2-3 policemen. I had never been allowed to contact the embassy.

Around 6:00 am, I took a chance to talk a little with the policemen. I asked if they had read Zhuan Falun. They answered no. I asked why they treat us as criminals although we were actually good people. The answer was that Falun Dafa was illegal. I asked: "Why is it illegal to meet friends? Don't you also meet your friends? Is that also illegal? Should I be taken as a criminal because of that?" It was the first time for some of the policemen there, to meet and talk to a foreigner so they took the opportunity to ask me about my country. Later on I asked for their names because they knew mine. But they didn't want to tell me. On the same floor there were around seven other rooms so I could see some other practitioners who were on the same floor as me, but I didn't know what happened on the other floors. Sometimes I could also hear someone shouting. When I tried to take a look in one room, in which the voices were raised, they closed the door and took down the curtain. I was not allowed to talk to my friends although I wanted to so much. At noontime a group of men came in and they wanted to go through my bag, but I refused to open it. I told them that if they let me contact my embassy I would let them look in it. They asked again but I just repeated the same about making contact with my embassy. Then they suddenly left the room. I know that if I wouldnt practise Falun Dafa I would have felt very scared at that moment.

They never offered me any food until late in the afternoon when their boss (I guess) asked if they had given me any food. I hadnt eaten since 24th of November. (I think that they just were scared to treat me too badly because I was a foreigner). I never ate anything. At 5:30 PM, the lady who had questioned me suddenly said that I could go and they would drive me to the hotel. I never had any chance to find out what would happen to my friends. I knew they were not released. I felt very helpless. I knew they would receive very awful treatments.

Returning back to my school and back again to my lessons the teacher brought up how bad Falun Gong was again. At that time I couldnt keep silent anymore. Why should I keep silent about that? At the same time I also felt sorry for all those Chinese people who were fooled by the media campaign in China and who could not know what Falun Dafa really was. Why shouldn't I tell that I practise Falun Dafa? Wouldn't it be selfish if I kept it for myself and also wrong if I didn't tell the truth about it? I told my teacher that I was a practitioner of Falun Dafa and that she should read the book so she could find out the truth of Falun Dafa.

Practitioners in China never give up telling how good Falun Dafa is, even if they know what they will face. By my own experience I can tell it is very difficult to tell the real story about Falun Dafa. All the TV stations, radio stations, newspapers and everywhere you go, you can only hear or read how bad Falun Gong is. Why do people still practise Falun Gong?

Even though there are some appeal offices, Falun Gong practitioners are not allowed to appeal. They will be directly put into a detention center, even put in jail, mental hospital, etc. The government doesnt want to listen to the people's voices. When all the doors are closed to you and your voice is not allowed to be heard anywhere, what will you do? Give up your basic right as a practitioner or a human being? Never! They have no other way to tell the truth about Falun Gong to the government and the Chinese people than going to Tiananmen Square. I know that many people dont understand this, they think this is a political act. The only way to correct the error that the Chinese government has done is to tell the truth about what Falun Dafa really is. The only place where they can at least be seen, if not heard, is the Tiananmen Square!

In the end I would also like to make this remark. Even if I felt the same pressure from the government as them, I never received the same treatment as my fellow practitioners in China because I am a foreigner. On the other hand, like them, I didnt have any rights while in police custody.

I hope that the people in the world can help to solve this problem that is happening in China peacefully. 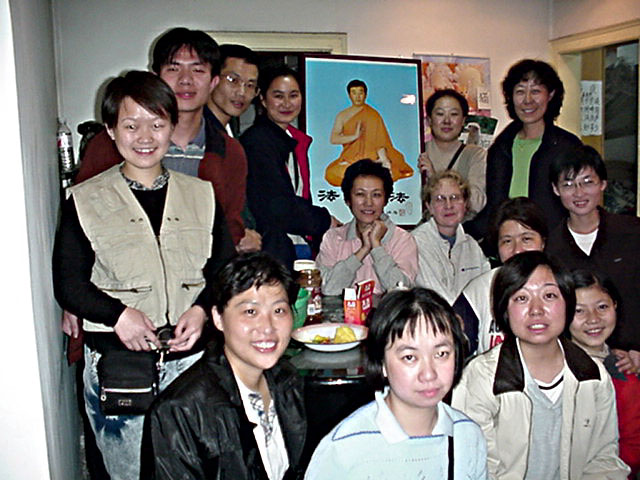