Ms. Shi Meiling was arrested in March 2009 and died several months after her release in poor condition in January 2010.

Mr. Xu Zhi is presently held in Daqing prison where he has been held in solitary confinement and exposed to freezing temperatures.


Ms. Shi Meiling Dies as a Result of Torture while in Custody

On the afternoon of March 13, 2009, Gaojia Town Police Station and Weibin District Police Precinct arrested Ms. Shi Meiling and her son Li Peng at their home.

After they were detained for five months, on August 24, their family was notified that the scheduled first trial was delayed indefinitely. But on the morning of August 31, the court suddenly told Ms. Shi's lawyer over the phone that the trail would begin immediately. The family reached the court more than one hour late and the door was locked. A court staff told them that other trials are open to the public, but Falun Gong cases were not.

On October 30, 2009, Weibin District Court secretly sentenced Ms. Shi Meiling to six years in prison, and her son Li Peng to three years in prison, with five years probation. The court never notified their family about this trial. The family received the sentencing on November 5, 2009.

She was a healthy lady upon her arrest, but by January 2010, she was emaciated, had difficulty breathing, and could not lie down or stand up. The detention center took her home when she was on the verge of death. She could only lean on the bed. She died at around 6 a.m. on April 18, 2010.


Mr. Xu Zhi's Wife Recounts the Persecution of Her Husband Since 2000 (Photo)

Mr. Xu Zhi, a Falun Gong practitioner from Baiquan County, Qiqihar City, Heilongjiang Province, has faced repeated persecution by the Chinese Communist regime since 2000. In 2008, he was sentenced to seven years in prison. He is now incarcerated in Daqing Prison. The following statement was made by his wife. 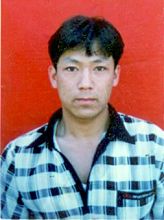 I had a happy family before the Chinese Communist regime started its suppression of Falun Gong in 1999. My husband, Xu Zhi, has been illegally arrested, illegally detained, sentenced to prison, and brutally tortured many times. There is no longer joy or happiness in my home. My family has been destroyed as a result of China's persecution of Falun Gong.

My husband has been practicing Falun Gong since before 1999. As a result, he has been very healthy and kind. It is a wonderful cultivation practice that has benefited not only my husband but also the people around him and the society as a whole. I could never understand why the Chinese government would persecute him for a practice that has turned him into such a wonderful person. Our poor three-year-old has not seen his dad since he was three months old.

In 2000, Xu Zhi was sentenced to one year in a forced labor camp. After he was released, he was constantly followed by the local police. Li Yanpeng, a local police officer, would come to our home and harass my husband when each and every politically sensitive day approached. Finally Xu Zhi was forced to leave home and hid in a different city where he found a part-time job.

At around 1 p.m. on September 29, 2007, he and a fellow practitioner returned to Baiquan County from Harbin City by bus. The police from the township and the county stormed out of their cars. The secretary of the local CCP Political and Judiciary Committee, followed by the police, appeared without a warrant. When Xu Zhi demanded the reason for his arrest, the police called for additional back up. Eventually, more than 20 officers were dispatched to arrest him and the other practitioner.

Their goings on drew a large crowd. To conceal the fact that they were arresting two Falun Gong practitioners, an officer told the crowd, "We are arresting them for binge drinking."

When Xu Zhi heard the lie, he shouted "Falun Gong is good" so that the crowd would know the police were arresting them for practicing Falun Gong. The officers didn't want to draw any more attention, so they quickly forced Xu Zhi and the other practitioner into the police car.

Once the officers had them in Baiquan County Police Department, they started to beat them brutally and then bound them to metal chairs with handcuffs. Xu Zhi had injured four fingers while resisting arrest and an officer tortured him by brushing the wounds with a small brush. To cause additional pain, the officers handcuffed him with one arm over his shoulder and the other forced up behind his lower back. Next, an officer put a steel helmet over his head and started to beat on the helmet with a baton.

But that was not the end of the torture my husband was subjected to that night. The police removed his shirt and repeatedly poured cold water over him with the windows open. They turned on a fan to blow more cold air at him. When he was dry, they would pour water over him again. After a few repetitions, the officers decided to wrap him with a wet towel and left the fan blowing on him. [Note: Qiqihar City is at the about same latitude as Vancouver.] When the sun went down, the officers taped newspaper over the windows so no one could see what they were doing. They then handcuffed one of his hands over his head and left him suspended in the air.

Baiquan County police immediately reported the arrest to the 610 Office at the city and provincial levels. The agents from the provincial 610 Office were even more brutal. They poured mustard oil into Xu Zhi's nose. After one day and two nights of torture, Xu Zhi and the other practitioner were transferred to Daoli Detention Center in Harbin City, where they were subjected to even more torture. The officers there ordered inmates to beat Xu Zhi brutally.

As the wife of a Falun Gong practitioner, I was not spared from the Chinese Communist regime's persecution.

On the morning of October 4, 2007, a police car arrived at my home in Taipingzhuang, Shuangcheng County, Harbin City, while no one was at home. They pried open the door and confiscated over 1,000 yuan in cash, a DVD player, an audio recorder, and our marriage certificate. Next they went to my parents' home in Yongsheng Township, Shuangcheng County, to arrest me. My parents were not home at the time. I was alone with my three-month-old baby. The officers tried to grab my baby and drag me into the police car. I tried to keep hold of my son to protect him from the police, but they grabbed him and made him cry. I yelled for help, and my neighbors quickly came when they heard me. The police quickly left as they did not have an arrest warrant. Although the police did not succeed in arresting me and my baby, they had left deep bruises in the shape of fingers on my baby's back.

In May 2008, the court in Daoli District, Harbin City brought Xu Zhi to trial but denied him the legal right to defend himself. The "trial" consisted of a judge reading the "charges" and the sentence. Xu Zhi was sentenced to seven years in prison and transferred to Hulan Intensive Training Center.

They repeatedly beat my husband from head to toe with rubber hoses. Due to the excruciating pain in his head, he had to sleep at night without leaning his head on any surface. The pain in his legs made him limp. His hands were so swollen that they looked like buns. Even his fingernails were broken off as the result of the brutal beatings.

But even that was not the end of the long litany of torture my husband suffered. The prison inmates pushed my husband on the ground and forced his arms backward to inflict pain. They continued doing this to him until he retched. He was in so much pain that he could not sleep at night. He was ordered to sleep next to an inmate with tuberculosis. On the nights he did not have to sleep next to the inmate with T.B., they would not allow him to sleep. After all of this, Xu Zhi still did not submit to their demands, so the inmates used a pair of pliers to pinch his toes and stuffed pepper seeds into his penis. In addition to the cruel torture, Xu Zhi was made to perform hard labor. He was made to get up at 4 a.m. and start working at 5. When he failed to finish his work assignments, he would face additional beatings and would be made to squat with his head down until 11 p.m. or midnight.

In July 2008, he was transferred from Hulan Intensive Training Center to Daqing Prison. In November 2009, he decided that he would no longer wear the prison uniform because he had not committed any crime. As a result, he was put in solitary confinement for seven days. The cell did not have any heat despite the cold climate in Harbin City. He was denied a coat and shivered in the cold in the middle of November. I repeatedly asked to visit my husband, but Daqing Prison refused to let me.

I had a happy family and a wonderful husband. But my husband has been taken away from me and our child because he practices Falun Gong and has refused to renounce his spiritual faith. I would like to urge those who read this report to extend their help to rescue him from prison so that we can be reunited.