Falun Gong Practitioner Che Hongfei lives in Yingkou City, Liaoning Province. His parents, parents-in-law and wife went to Dalian City Prison four times to request his release after they learned that Mr. Che had been tortured to the point that his life was danger.

Mr. Che Hongfei's Life is in Danger but Dalian Prison Authorities Refuse to Release Him


Che Hongfei, 37, is an English teacher employed by Hongqi Town Middle School in Yingkou City. He was later hired by the Xiongyue Town High School. He has been arrested and taken to labor camps several times by officers from the Hongqi Town Police Station and Xiongyue Town Police Department. In February 2006, Mr. Che, who had been hired to teach English at a private high school in the Yuhong District of Shenyang City, was detained because somebody reported him, and he was sentenced to seven years in prison. Because of his extremely weakened condition and his life being in danger, he was picked up by his family from the labor camp and was then monitored by officers of Hongqi Police Station around the clock. The constant monitoring compelled Mr. Che to leave home and he had to live far away from home in Shenzhen City, Guangdong Province. When he clarified the truth about the persecution of Falun Gong, he was arrested by local police officers, taken back by police from Hongqi Town Station, and detained at the Anshan City Prison. On December 27, 2007, Mr. Che was suddenly taken to Dalian Prison. He is now in very poor condition, and his life is in danger.

Mr. Che's family has gone to Dalian City Prison to request his release four times. On their first visit, the family met with the Prison Education Office Chair Wang Hongliang (male). When they saw Mr. Che, his family was very shocked at his condition. Mr. Che had been on hunger strike for more than seven months. Most of his muscles were atrophied, and long-term force-feeding had caused stomach bleeding. His body looked so weak that he was like a skeleton and was unable to walk. His family stated "Che Hongfei is innocent, and now he is in critical condition. He should be released immediately." Wang answered that he would report to his boss immediately and the decision would be made within two or three days.

On their second visit, Mr. Che's family brought a letter of request to Wang. Wang refused to take it because there were truth clarification materials in it. He said he would submit a request for "release based on medical condition" to his boss.

On their third visit, Mr. Che's family met with deputy warden Cui (male). He said that Mr. Che Hongfei's life was in danger, he was hospitalized, and therefore could not be seen by the family. He also ordered the family to pay for treatments and hospitalizations, and said that they would release Mr. Che as soon as his health improved.

On their fourth visit, Mr. Che's family met with Yang (male) who claimed to work for the Justice Division of the Dalian Prison. Yang made an excuse of having an emergency, and did not allow the family to meet with Mr. Che, but he said he would report to his upper-level supervisors, and that there would be a response soon. When Mr. Che's family and friends went back to the hotel, they were told by the owner of the hotel that the police would be doing a night-check that night and that there would be trouble if anyone didn't have identification. It was apparent that Mr. Che's family was followed by prison guards on the way back to their hotel. The guards are searching for excuses to mistreat them.

On July 28, 2007, police from the Dangbi Township Police Station arrested practitioners Mr. Zhang Chuanfu and Mr. Xue Yanrong of Mishan City, Heilongjiang Province. Officers from the city police department not only extorted money from the practitioners' families but also sent the practitioners to a forced labor camp.

The two practitioners are Mr. Zhang Chuanfu, 21, who became a practitioner in February 2007, and Mr. Xue Yanrong, 33.

On August 21, Mr. Zhang Chuanfu's family appealed for his release, through someone connected with the police. Mishan Police Department deputy chief Han Jingxin agreed to release Zhang without any payment but changed his mind on August 22 and demanded a bribe of 10,000 yuan from Zhang's mother. Mr. Zhang's mother insisted that her son was innocent and they should not pay the bribe. Han said, "Let me talk to the chief, to see if we can release your son for 5,000 yuan."

Han Jingxin returned in the afternoon saying, "Pay me 5,000 yuan and we will release him."

Desperate and out of options, Mr. Zhang's mother gathered 5,000 yuan and returned to the police department on August 24, 2007. After the police received the money, a woman police officer said they would release Zhang in a couple of days. When the family asked for a receipt she said, "We never give receipts!"

On the morning of August 28, Xue Yanrong's wife and mother appealed to deputy police chief Han Jingxin for Xue's release. Han again demanded money and verbally insulted them. Xue's wife said that Han's request was against the law. Han became very angry, grabbed Xue's wife's clothes and told her to "get lost." He threatened, "If you don't disappear now, I will slap your face."

This was not the first time Han had bullied the family. He had acted similarly toward Zhang's parents before.

Several days later, Xue's family returned to ask for his release. Han said, "It won't be so fast. It will take a few more days. We have to do some more investigating."

A few days later the family came to ask him again. This time Han Jingxin became impatient and said, "Do not come to the police department again. If you come again, I will send your son to a forced labor camp. I really mean it!"

Why did the police not release the practitioners even after bribes were paid? As we learned later, the two police chiefs, Han and Feng, felt that the money was not enough. Also, Xue's family had not paid the 15,000 yuan that Han Jingxin demanded. Han was furious when some local people exposed this incident to the public. To retaliate for the exposure, the police sent the two practitioners to a forced labor camp on the evening of October 15, 2007.

On the afternoon of October 17, Mr. Zhang Chuanfu's father came to see Han Jingxin and asked for permission to see his son. Han said, "They are gone." Zhang's father, "Why? Where did you send them? What law did he violate?" Han said, "He distributed Falun Gong flyers, and that was against the law. I have no idea where they were sent. Why don't you ask the detention center?"

Later, Zhang's father asked detention center head Cui Hongqian, "Why didn't you inform our family when my son was sent to a forced labor camp?" Cui said, "We are not obligated to inform you."

On the morning of October 18, it began to snow. The heavy snow continued on October 19. At 9:00 a.m., Mr. Xue Yanrong's wife came to see Han Jingxin, and asked him where her husband was. "Sent to Suihua," replied Han.

"Why didn't you inform the family?" Xue's wife asked.

"Why should I inform you? What kind of business do you have in this?" said Han.

At this point, Xue's wife accused him of violating the law, and told him he would receive karmic retribution for his persecution of Falun Gong practitioners. Han Jingxin became furious and punched her down to the floor. Mr. Xue's wife cried loudly, "A policeman hit me!"

Han was not about to quit and tried to hit the woman again before bystanders stopped him. 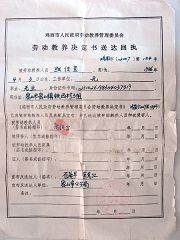