Mr. Wang Hongrong, a Falun Gong practitioner from Hefei City, Anhui Province, was illegally sentenced to jail for eight years in 2005 by the Chinese Communist Party (CCP). He was tortured by prison guards in Suzhou Prison and became paralyzed. The police released him when he was in critical condition. Two months later, on June 22, 2007, he passed away at home.

Mr. Wang was born on April 4, 1949. He worked for the Forklift Plant Administration Division in Hefei City, Anhui Province. He was known to be a good person by everyone in his company. 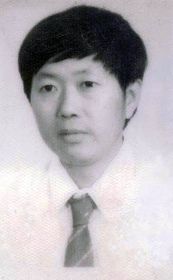 Before Mr. Wang was subjected to the persecution 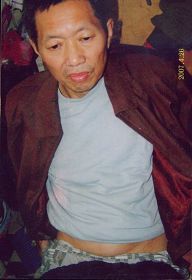 This photo was taken after Mr. Wang was released from jail. 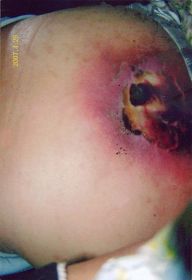 Bedsore suffered while in police custody 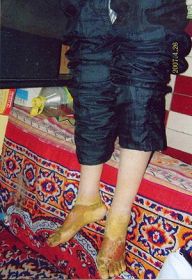 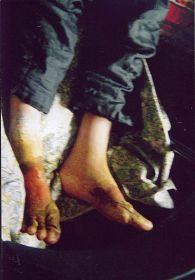 On April 30, 2003, the 610 Office police went to Mr. Wang's home, and they threatened and harassed him because they saw a practitioner enter his home. They ransacked Mr. Wang's home and confiscated his computer equipment and household appliances, which had a total value of over 10,000 Yuan. He was forced to leave home and went from place to place. Mr. Wang's wife, Ms. Zhang Jiyu, was also victimized by the persecution. She was forcibly sent to a detention center for one month and then held in an administrative detention camp for another 15 days. Then she was taken to a brainwashing center for more persecution.

On September 24, 2004, Mr. Wang went to help produce truth-clarification materials in Fuyang City. He and more than 10 other practitioners were arrested by the CCP personnel there. They were held in different places. They were severely beaten and had confessions extracted from them by torture.

On June 15, 2005, the CCP court in the Yingzhou District, Fuyang City secretly held a hearing for Mr. Wang and other practitioners. The court did not inform practitioners' families or announce the names of the judge and adjudicator. There were no spectators allowed. Because practitioners had no lawyers who could defend them, they had to represent themselves. During the hearing, they shouted "Falun Dafa is good!" and "Falun Dafa is an upright teaching!"

In September 2005, the court secretly held another trial against Mr. Wang. He was sentenced to eight years in prison and sent to the Suzhou Prison in Anhui Province. During his imprisonment, the wardens ordered two inmates who had infectious diseases to supervise him. One of them had tuberculosis and the other had hepatitis. They forced Mr. Wang to do hard labor everyday.

Mr. Wang was very steadfast in his belief in Falun Gong even when he was in prison. In February 2007, the police searched Mr. Wang's body. They found some copies of writings by Falun Gong's Teacher. As a result, they threw him into the confinement cell, where he was severely beaten. They also instigated prison personnel and inmates against him. As a result of the persecution, Mr. Wang became incontinent and his lower body was numb. Because he could not look after himself and nobody else did, he was often covered in feces.

In early April 2007, the general manager from Mr. Wang's company visited him in the prison. Mr. Wang told he that he couldn't move his legs anymore. Shocked by the scene, the manager demanded that one of the prison guards take him to the hospital for treatment. Before going to the hospital, Mr. Wang said, "I am very dirty and smell so badly. I'd like to take a shower before I go to the hospital." Enraged for some reason, the prison guard ordered inmates to force his feet into a bucket of boiling water. Half a day later, his feet swelled up and festered, with blisters all over. The prison guard then forced Mr. Wang to say on videotape, "The inmates were just trying to help clean my legs. They didn't do it intentionally."

Mr. Wang was diagnosed by the hospital as having bone cancer, paralysis, numbness, and incontinence. He was in good health before the persecution. His critical health problems are directly attributable to his long-term imprisonment and mistreatment.

In order to shirk responsibility, Suzhou Prison released Mr. Wang in late April 2007 after he was tortured to the verge of death. On April 26, 2007, Mr. Wang's wife went to pick him up . As she tried to apply for medical treatment for Mr. Wang, the prison chief, who had the last name Tang, told her that they had no money. He also stated that Mr. Wang had to write guarantee statements to give up Falun Gong to be eligible for medical care.

When Mr. Wang returned home, a huge bedsore was found near his buttocks. Because he had not relieved his bowels for more than 10 days, his stomach was extremely swollen. He became incontinent and his face was grossly distorted. He was diagnosed with bedsore sepsis two months after he was taken home. At 5 o'clock on June 22, 2007, he passed away at the young age of 59.