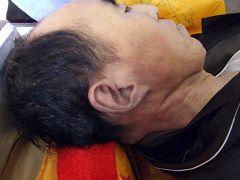 Dafa practitioner Mr. Li Enying, who died as a result of police brutality 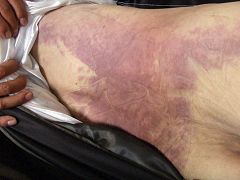 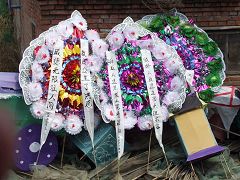 Wreath and Couplets in memory of Mr. Li Enying

Mr. Li Enying and his wife Li Chunfu lived on the Fifth Farm in Tanghai County. They both firmly cultivated Falun Dafa and followed the principles of Truthfulness-Compassion-Forbearance. They have been persecuted for the past eight years.

Soon after the New Year of 2001, the Chinese Communist Party (CCP) Deputy Secretary of the Fifth Farm Li Xun (male, has since transferred jobs) and Fifth Farm Police Station Director Sun Qiyuan (male) forcibly took Mr. Li Enying from his home and beat him for more than four hours in the police station. He was kicked, slapped, and shocked with electric batons. They locked him in a metal cage overnight. On May 20, 2001, as ordered by the Tanghai County Police Department 610 Office, Fifth Farm CCP Deputy Secretary Li Xun, CCP Office Chair Zheng Yougang (male), Fifth Farm Police Station Director Sun Qiyuan, and Deputy Director Wang Mingzhuo, Mr. Li Enying and his wife were deceived into going to the Farm Office. They were then forcibly taken away and detained in the Tanghai County Detention Center. During the detention period, Mr. Li Enying was beaten by seven policemen at the same time, led by officer Sun Yuechang and Li Xuejun (the latter transferred to the Eleventh Farm Police Station).

On October 11, 2006, the Political and Security Office Chair Li Taizhong (male, transferred jobs) and Deputy Chair Sun Jingsen (male), together with the Fifth Farm Police Station Director Yao Yuzhong (male, transferred jobs) and the Deputy Director Li Quanrui, arrested Mr. Li Enying again while he was working on a railroad and detained him in the Tanghai County Detention Center.

In order to avoid further persecution, Mr. Li Enying escaped the detention center and left town. However, he was arrested at around 1:30 p.m. on January 19, 2007, at a fellow practitioner's home in Beiqingtuo Village in Changgezhuang Township, Xinjuntun Town in Fengren County, Tangshan City. Twenty police officers where involved in the illegal arrest. They sentenced Mr. Li to forced labor in the Shijiazhuang City Forced Labor Camp on January 25, 2007.

Mr. Li was subjected a multitude of tortures in the Shijiazhuang Labor Camp, including being forced to sit on a small stool for a long time, and being closely monitored by prisoners. He was not allowed visitation rights. On June 20, 2007, Mr. Li started to experience discomfort, and he was diagnosed to have a pleura infection (tuberculosis). The camp released him on bail for medical treatment on July 17, 2007. Upon returning home, Li Enying had difficulty eating, walking, and breathing, had a blurry mind, was unable to lie down, and his whole body was swollen. He coughed up a lot of mucus as well. Mr. Li Enying died on the afternoon of July 29, 2007.

Below are photos of the units responsible for Mr. Li's death: