(Clearwisdom.net) The 65th Annual International Council of Psychologists (ICP) Conference was held at the Westgate Hotel in San Diego from August 11 to 14, 2007. Psychologists from around the world shared their results probing the relationship between mental health and environment. The scope of research is to promote multi-cultural relations and peace between ethnic groups, as well as hope and health.

Dr. Jason Liu and Dr. Gwendalle Cooper published a study entitled "Study at Cellular Level on the Psychological and Physical Healing Effects of Falun Dafa Meditation." Dr. Jason Liu is the founder and Director of Mind-Body Science Institute and Center of Brainwave-Meridian Therapy (BMT). His research focuses on combining modern technology and traditional natural healing methods from China such as meditation, hypnosis, music and energy to heal illnesses. Dr. Liu endeavors to prove the results from a scientific point of view.

Figure 1. Bio-energy photography shows that practicing Falun Dafa can intensify people's energy field and improve energy circulation in the human body. The numbers 1 to 5 are bio-energy photographs taken of a practitioner's thumb, index finger, middle finger, ring finger, and small finger (left hand). The bio-energy on the right hand is the same and is not shown in the picture.

Figure 1 shows bio-energy photography taken of a practitioner's fingers before and after an hour-long meditation. The photography was taken with a commonly used high-voltage high-frequency Kirlian CV6000 photoelectric technology with a Sony DCR-VX2000 NTSC camera. The results showed bio-energy in a practitioner's finger increased significantly after meditating for an hour. This indicates better peripheral circulation. The ten fingers connect peripheral meridians and acupuncture points. This experiment proves the practice opens the body's meridians and increases life energy. The results provide scientific evidence of health benefits of Falun Dafa from the perspectives of energy medicine and Chinese medicine.

In a psychological experiment, Dr. Liu used the Heart Math Monitor developed by the Heart Math Institute to record and calculate the Heart-Brain Entrainment Ratio of a practitioner in the process of meditation. The Ratio is used as an index of mental health and shows whether a person's mind is pure and in harmony with the person's body. The result shows practitioners' Heart-Brain Entrainment Ratio went from 40 percent before the practice to 94 percent after the practice. It shows practitioners, after improving their personality and mind in the practice, experience enhanced mental clarity. After the Meditation their body and mind are highly compatible and in harmony. 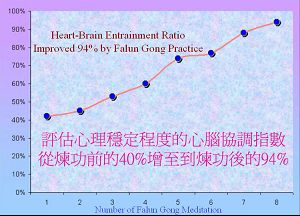 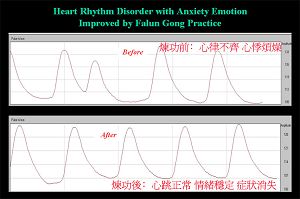 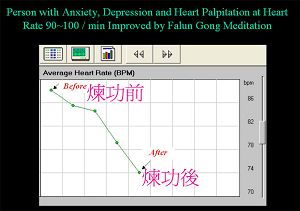 This research received a warm welcome from conference participants. Many psychologists agreed that future psychological research and validation should not be confined only to western medicine that focuses on and treats only the symptoms of illness. Psychology should seriously begin researching the theory of eastern traditional health care such as Falun Dafa , a universal view of body and mind practice, and energy medicine. When the psychologists learned that Falun Dafa has been under the Chinese Communist regime's persecution for eight years, they showed their support and sympathy for Falun Dafa. They hoped to introduce this profound practice to others and wished to personally learn more about Falun Dafa to assist with their research on psychology and medicine.

Dr Liu said at the end of the interview that current studies on psychology and medicine can't reach the same results as in the above clinical cases. The current technology and the persecution in China limit his research on Falun Dafa. The result he presented is only a small part of what the practice can achieve. Even so, it has received world wide attention from the scientific community. The research on the healing power of Falun Dafa adds an alternative approach to modern science and medicine. It will create an opportunity to introduce people in the future to a purer insight of the real meaning of life in the universe- the science of cultivating a human life.