(Clearwisdom.net) Ms. Jiang Pai, age 30, was a staff member of the Daqing Main Petroleum Industry. She was forced from her job in October 2000 because she firmly held to her practice of Falun Gong. She never stopped clarifying the truth and saving sentient beings. Ms. Jiang had been homeless, was illegally arrested and persecuted many times. 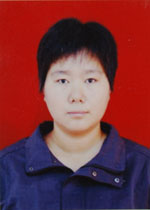 On August 29, 2006, Ms. Jiang was arrested at home, but after one week on a hunger strike she was released.

On April 26, 2007, she was arrested at her work place by the Daqing Public Security Bureau, Wolitun Subdivision, and held in the Daqing Detention Center. She began a hunger strike against the persecution and was force-fed against her will. During the brutal force-feeding, Ms. Jiang vomited, coughed blood and passed out. She lost a lot of weight and was too weak to walk. She had been a healthy woman about 5 feet 7 inches tall and had weighed about 70 kilograms.

Ms. Jiang was sent to the hospital for emergency treatment for about 10 days, and the hospital discovered she also had gallstones. Deputy Director Zhang Yiqing of the Wolitun Public Security Subdivision Bureau showed no concern for her life and sent her back to the detention center. He even stated, "Anyone can be released for medical attention except Jiang Pai." He attempted to sentence her to a labor camp.

On June 26, 2007, Jiang Pai's family learned that she was at the Daqing Petroleum Hospital. Her elderly parents came to visit her. They found that she was handcuffed to her bed. Her legs were covered with bruises and were swollen. She was being given oxygen and could not talk, and just a little water almost choked her. In spite of her condition, she still had two police watching her.

On June 27, 2007, Ms. Jiang's family went to request the Public Security Bureau and Subdivision to release their daughter, but they were refused. The officials stated that they would treat Ms. Jiang's illness but would not release her.

Jiang Pai passed away on June 28, 2007. She died with 5-kilogram shackles still on her ankles. The police were in a hurry to cremate her body in spite of her family's insistence on an appeal for justice.