(Clearwisdom.net) Divine Performing Arts' tour performances have caused a sensation in different places around the world. Its performances in Taiwan aroused the same enthusiastic response from the audience. The audience was immersed in the atmosphere created by the performers and the swift, skillful flow of the program.

Rainy weather on April 8 in Taipei could not dampen the people's enthusiasm, and there was a full house for each performance. The three performances in Taipei drew attendees from the arts, politicians, those from the financial world, and education. Dignitaries included former Vice Premier of the Executive Branch Yuan Yeh Chu-lan, President of the National Taiwan University of Arts Huang Guang-Nan, President of the National Taiwan University Lee Si-Chen, artist and critic Ho Huai-shuo and others. 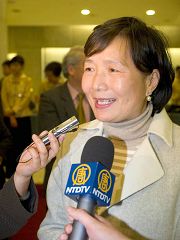 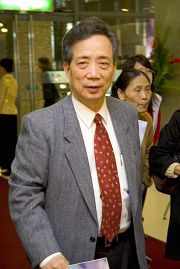 President of the National Taiwan University of Arts Huang Guang-Nan 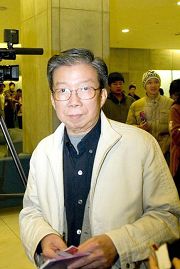 Famous calligrapher and associate professor in the Department of Chinese Language at the National Taiwan Normal University Du Chung-Gao said after watching the Divine Performing Arts performance that he wanted to listen to Qi Xiaochun's Erhu solo once again. He said, "I'm very interested in the Erhu and have listened to many Erhu performances, but Qi Xiaochu's performance was the best. It was harmoniously and seamlessly combined inner spirit, including her expression while performing and her movements of pulling the bow." "A Dunhuang Dream" personalized the stone sculptured Buddhas' Statues in Dunhuang. In a dream, the sculptor entered a Buddhas' Paradise and saw Buddhas. He then sculpted the image of those Buddhas in the human world. 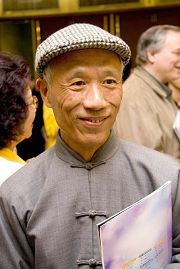 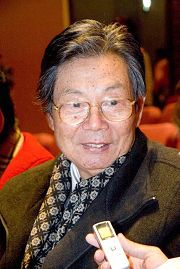 Gu Nai-chun, Head of the Department of Drama at the National Taiwan University of Arts, who taught renowned Chinese director Ang Lee and Hou Hsiao-hsian, watched the performance on April 8. He said that the dance "A Dunhuang Dream" was well-conceived and very creative, and it opened up the audience's imagination. The story-telling through dance was quite moving.

Male dancers' performances "Herding on the Mongolia Plains" and "Rainbow" combined the forms of traditional Chinese dancing and ballet, presenting a new style for the audience.

The traditional tale of Yue Fei's mother tattooing the words "Jing Zhong Bao Guo", "Repaying the Country with Great Loyalty" on his back was conveyed visually through dance, expanding the original story with modern technique and methods, leaving a deep impression on the audience. 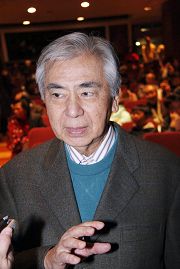 Mr. Lai also complimented the costumes and commented on the amazing "Bowl Dance." He praised the performers synchronization and skill. Mr. Lai pointed out that each dance had a specific subject matter, and the message they wanted to convey was very clear.

Taiwan veteran actress Chang Chi said after watching the performance by the Divine Performing Arts that she has been engaging in stage work for 43 years, and this was one of the finest she has witnessed. The performance highlighted mankind's artistic wisdom, and she saw the virtues of loyalty, filial piety and righteousness in the performance. She expressed her joy at seeing these descendants of the traditional Chinese culture perform. 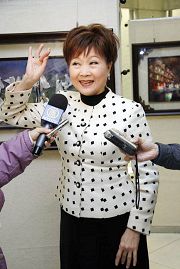 Chang Chi became well-known across Taiwan with a song named "Bridge for Lovers," in the program "Gathering of Stars". She said that she has loved dancing from the time when she was just a child. The "Bowl Dance" and "Herding on the Mongolia Plains" were especially enchanting to her.

After watching "The Ladies of Manchu Court", Chang Chi said that it was unbelievable how the dancers could perform so exquisitely while wearing flowerpot shoes. She said that she had also worn such shoes when she played a role as a Manchu Lady in a film. It was not easy to stand steadily because the flowerpot shoes are so high off the ground, and all of one's weight is on a small area. The dancers' kicks required superb skill.

She said that the slow motion dance is more difficult to perform, requiring the dancers to perform carefully and slowly, and walk gingerly. At that time, she said that she could feel her mind and breath follow the beat of the music, not daring to do anything that might disrupt the dancers' concentration.

While watching "Herding on the Mongolia Plains," Chang Chi was delighted by the dancers when they did the movements of dismounting and galloping on horseback.

Chang Chi said that she admired the dancers' shoes, as each pair of shoes and costumes are consistent with the nationality represented. She could see the costumes were put together with great care and precision. The colors were resplendent, and the musical quality was also very good. Yang Jiansheng's alto performance was haunting.

Chang Chi said that she could see that the dance coach must have put in a great deal of effort for these dancers from North America to be in sync so well with the music.

She also complimented the dance team's cohesion and musical arrangement. It was really rare to see. Both Chinese and Western audience members could enjoy the inner meaning of what they performed. She said that it was worth promoting to all of her friends, as there was something for the whole family.

Chang Chi wanted to thank New Tang Dynasty Television for presenting the precious Chinese culture to the whole world. She wished Divine Performing Arts the best in spreading beautiful things to the whole world and helping people understand the virtues of Truthfulness, Compassion, and Forbearance.

Associate professor of the Ming Chuan University and editor-in-chief of China Times Ni Yan-yuan said after watching the Divine Performing Arts' performance that interpreting historical stories such as Yue Fei and Hua Mulan in the form of dance preserves inherent tradition while adding new elements of art. This original approach allows people to enjoy the beauty of these stories from a different angle. 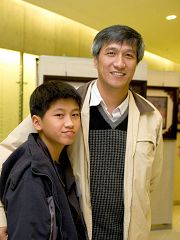 Ni Yan-yuan said that the performance has three unique characteristics:

1. Stories such as Hua Mulan are quite familiar to us. I first saw it in the 1940's. It is wonderful to see such traditional performances today on stage.

2. The backdrop is presented with three-dimensional moving images, which accompany the story. This is a very good and creative approach.

3. The performance combines traditional Chinese dance and Western ballet, and it is done very well. The effect was truly beautiful.

Mr. Ni was particularly impressed by the artistic conception of two performances, "A Dunhuang Dream" and "Resounding Drum." He said, "Thousands of Buddhas in Dunhuang harmonized with art, dance and music--the effect is so touching. The author really put much effort on designing it. I'm quite sure about that." As for "Resounding Drum," he complimented the performance's embodiment of creativity and vitality.

Mr. Ni said that the stories of Yue Fei and Hua Mulan are seldom mentioned in mainland China and Taiwan anymore, but the themes of loyalty and filial piety presented by these two historical figures are worthy of everyone's attention. Divine Performing Arts preserves these traditions and presents them in a new way.

Renowned singers Jiang Min, Yang Jiansheng, Guan Guimin and Bai Xue performed "Why Refuses?" "Tiananmen Square, Please Tell Me," "Finding the Truth" and "Who I Am" respectively. Mr. Ni thought that some messages of Falun Gong were conveyed through the songs, and they were done quite well.