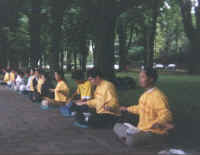 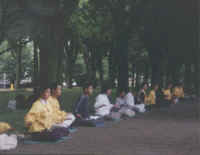 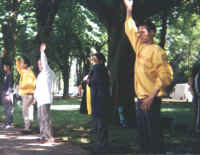 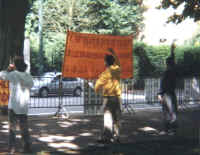 BRUSSELS -- They were standing in a long line in front of the Chinese Embassy in Brussels. There were a few banners and signs, but the spiritual exercises caught most of the attention. With this demonstration, Falun Gong practitioners in Belgium were trying to expose the persecution of their fellow practitioners in China.

Falun Gong is a spiritual practice consisting of five exercises which help lead to a healthy body and mind. The practice has spread all over the world, but is especially popular in China. This popularity was very disturbing in the eyes of the Chinese President Jiang Zemin.

Two years ago Jiang Zemin prohibited the spiritual movement in China. The start of this prohibition was attended by a bloody persecution.

According to a spokesperson of Falun Gong Belgium, between July 1999 and June 2001, "about 10,000 practitioners were sent to labor camps and 252 were tortured to death."

"Falun Gong is based on the principles of Truthfulness, Compassion and Forbearance. The Chinese government states that these principles are not consistent with communism," says a flyer about the movement.

"Yet the Chinese government itself is divided," said a spokesperson. "The movement in China has adherents in all layers of society. It is mainly the president who is the driving force behind the repression. He was frightened by the fact that there were more Falun Gong practitioners in China than members of the XX Party." It is said that about 70 million Chinese follow the spiritual practice.

With their demonstration in front of the Chinese Embassy, the activists wanted to appeal to the public.

Earlier, the Embassy refused a dialogue with the activists.

"By our actions we want people to know the truth and inform them," said a spokesperson.

On July 20, practitioners from Germany came to Berlin for an "SOS" walk. Wanting to spread information about the situation in China, we passed out many newspapers to the people on the street. Five practitioners collected 15,000 petition signatures for the minister, Joschka Fischer. Finally the SOS parade arrived at the Chinese Embassy and joined the practitioners that have been staying there and appealing for over 200 hours. The practitioners did the exercises and handed out flyers.

In Berlin on July 21, we walked from the Alxanderplatz to the Chinese Embassy and back again to Alexanderplatz, where we had an information stand. This parade was attended by fifty practitioners.

On Sunday, July 22, we paraded for two hours on the west side of Berlin on the Kurfrstendamm. Most people who saw our parade were interested in Falun Dafa and our Dafa newspaper. Altogether, we gave out thousands of newspapers to the people. 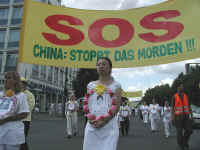 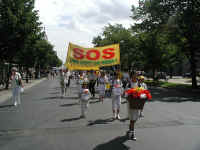 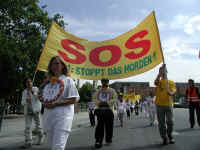 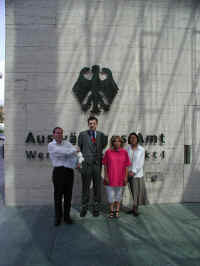 Thank you for your recent correspondence regarding the Cross-Ireland Journey for Support for the Rescue of The Falun Gong Practitioners persecuted in China.

I wish you well in this important venture and pledge my support to you and your colleagues as you work for freedom and justice, not only for Zhao Ming, but for all Falun Gong practitioners in China.

I am aware that the Irish Government, with our EU partners, has called upon the Chinese authorities to respect the human rights of individuals, and has urged them to act in accordance with the principles contained in the UN Covenants, signed by China, in particular relating to the freedoms of expression, assembly and association. The Irish Government is committed to working actively to bring about full observance of human rights in China and I fully support this stand.

With my best wishes for success of the Cross Ireland Cycling Journey,

Detailed information about the first two of these four Dafa practitioners can be reviewed in the following article: http://www.clearwisdom.net/emh/articles/2001/7/21/12457.html

Chen Jiafu was a teacher at a polytechnic school in Dalian city. Beginning in July 1999, he had gone several times to Beijing to appeal for Dafa and clarify the truth. He was illegally sentenced to a forced labor camp in October 1999. When he first came to the Dalian Indoctrination Center, he was forced to do the heaviest job--snatching the bricks.

Chen Jiafu was six feet and three inches tall. After continuously stooping and straightening his back for several days, he was so exhausted that he was passing blood in his stool and could not straighten his back. He was very weak physically. In September 2000, he was transferred and finished his sentence at the Dalian Indoctrination Center. At that time, he had already been dismissed by his employer. His wife divorced him. His parents had been so severely poisoned by the lying propaganda that they could not understand him.

Although he had nothing to his name, he looked for and found a job. After one month of working he had earned several hundred yuan, and again went resolutely to Beijing to appeal for Dafa. He was once more sent to the Dalian Indoctrination Center and was locked up in a "small cell" (solitary confinement). The staff working for the Education Section of the Dalian Indoctrination Center talked to him several times. He not only refused to give in, but also promoted Dafa and told them how wrong they were to persecute Dafa. After being released from the small cell, he was transferred and kept under close surveillance. Once when he was attending a meeting, he slightly closed his eyes, and was at once pulled out of his chair by the deputy director of the Dalian Indoctrination Center. Several policemen pushed him down, beat him up and forced him to kneel down. Chen refused to give in.

While under close surveillance, he was very strict with himself. Every day, he made good use of the time to recite the Fa and check inside for his own shortcomings. He always felt that he was not doing well enough. After March 2001, he was detained in the first brigade. The director of the Dalian Indoctrination Center himself, Hao Wenshuai, tried to force him to give up his belief. He did not give in, but still promoted the Fa. He was again locked up in the small cell until he was tortured to death for insisting on his righteous belief.

On March 19, 2001 the political commissar, Zhang Xiaoliang, Hao Wenshuai, Zhang Baoling and others had a meeting to prepare for the criminal "forced transformation" of Dafa practitioners. Since then the Dalian Indoctrination Center has entered a horrifying period.

The method for "forced transformation" is to use the prisoners or the team leaders together with another three to five persons to handle one Dafa practitioner. Some of the practitioners were tied up in a standing position; some of them were handcuffed so that they were kept on the floor on their backs; still others were pushed down to the ground on their hands and knees. Wearing only shorts, the practitioners were shocked with electric batons. After they lost consciousness, they would be splashed with cold water and then shocked again. Or they might be beaten up with rubber clubs.

When the team leader named Qiao Wei was tired from beating the practitioners, he asked the prisoners to continue beating them. Some practitioners' faces were pressed down into the water, and they were almost suffocated before they were allowed to take some air. The torturers often used the electric batons to shock the practitioners' sensitive parts such as their genitals, necks, faces, arches of the feet and ears. Every day, miserable cries filled the floors upstairs and down. Whoever did not want to give up was tortured brutally. Zhang Jun's head received cuts; Zhou Benxu was beaten so badly that he could not stand up; Liu Changhai was tortured for several continuous nights. Screams of pain often broke out at midnight. In order not to let the cries be heard, the torturers used the mop to stop the Dafa practitioners' mouths. It is said that Liu Yonglai was tortured to death in this way.

At the present time, the Dalian Indoctrination Center uses these extremely brutal means to treat those practitioners who have recently been arrested. The team leaders ask the Dafa practitioners who have recently been arrested to kneel down on the ground. They keep them kneeling down if they do not give in. If they refuse to kneel down, they will use the electric batons to shock them. Jing Dianke tries to force the practitioners to write "exposure-criticism materials." If they do not write, they are considered as "stubbornly insisting on doing Falun Gong" and will be punished. Or, even if they write but do not curse Falun Gong in what they write, the policemen will not let them go. Frequently, they use the electric batons to threaten the Dafa practitioners.

Sometimes, the team leaders gave the electric batons and the policemen's tools to the prisoners and asked them to beat the Dafa practitioners. Whoever beat the practitioners would be rewarded with a deduction from the length of their sentence. Some prisoners, including Zhang Fudong and Jiao Bo, thus became willing accomplices to the police.

"I introduced myself and asked Mr Jiang to stop the killing of Falun Gong practitioners in China. He was very agitated [...]" - Ms Wang Wenwi.

Chinese President Jiang Zemin was taken aback yesterday during a visit to Mdina when a Chinese-American woman slipped past the phalanx of security men and asked him - standing just a few centimetres from him - about the suppression of Falun Gong followers in China.

Security guards immediately whisked her away from the President who, against all expectations but showing a presence of mind, asked her to be allowed back. He then answered her in an agitated voice and with much gesticulation.

The answer was in Chinese but the words Falun Gong could be made out clearly.

Falun Gong followers have been to Malta during President Jiang's visit, putting up peaceful protests against China's treatment of followers.

The incident at Mdina happened in a split second when the President departed from his official programme after a visit to the Cathedral Museum, going on a short walkabout to take a bird's eye view of Malta from Mdina bastions.

Coming down the steps leading from the bastion close to Fontanella Cafeteria, Ms Wang Wenwi managed to sidle up close enough to Mr Jiang to fire her question directly at him.

Police sources said it was Mr Jiang himself who wanted to go for a short walk, perhaps feeling secure and relaxed after experiencing the laid back tempo of life in Malta.

"The street along which the President walked was not lined with police officers because it did not form part of the program.

"The woman who approached the President did not constitute a breach of security," the police sources said.

Contacted later, Ms Wang told me: "I introduced myself and asked Mr Jiang to stop the killing of Falun Gong practitioners in China. He became very agitated [...].

"My point is that no one should be persecuted to death because of a different religious belief or point of view. It's against human morality to kill people for their beliefs," Ms Wang said.

Ms Wang said there were about 100 million Falun Gong practitioners in China. Falun Gong promotes discipline of the mind and body, self improvement, the search for truth, compassion and tolerance, she said.

Ms Wang said that last week a report from Hong Kong said that 15 Falun Gong practitioners had been beaten to death in the Chinese province of Heilongjing.

She is a graduate of the Norman Beihune university of medicine in Changchun, Jilin Province in China, and moved to the US 16 years ago, where she graduated in western medicine and later obtained a PhD in neuro science from the University of Chicago.

She leads one of the study groups of Falun Dafa in San Diego, California.