(Minghui.org) Today's news from China includes incidents of persecution that took place in 8 cities or counties in 6 provinces, where at least 72 practitioners were recently persecuted for their belief. 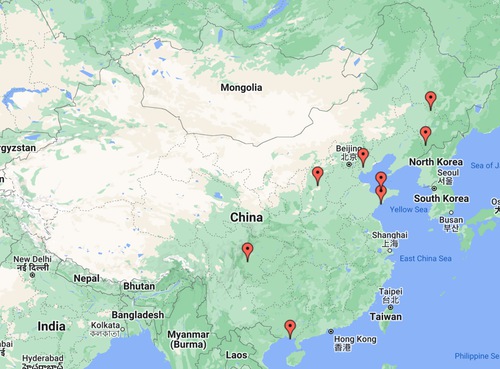 At the end of August 2022, the police asked Ms. Wang’s son to bring her to the Dongpo District Police Department and then to the procuratorate. They said that Ms. Wang could be convicted for two reasons. One was because she talked about Falun Gong with two other practitioners, and the other was because she talked about Falun Gong to the officers who arrested her. The officers ordered Ms. Wang to sign and fingerprint three documents before they released her.

A few days later, the procuratorate located Ms. Wang and her son again, and told her to sign and fingerprint some more paperwork. They told her that a court hearing would be held in September, and she had to prepare for it.

It was reported that Mr. Li Shihai was officially placed under arrest on July 20, 2022. His case may be turned over to the procuratorate on September 20.

Ms. Li’s pendant with the phrase “Truthfulness-Compassion-Forbearance,” which hung on the door, was removed by someone a few days before.

At 6 p.m. on September 7, three plainclothes officers from the Gaode Industrial Park Police Station showed up and told Ms. Li to go to the police station for questioning. Ms. Li refused to go and was arrested and handcuffed. Ms. Li’s grandson, who was in elementary school, was also taken away when she was arrested. Ms. Li and her grandson were released after 10 p.m.

Ms. Li Mianzhen, Mr. Zheng Runye, and Ren Zhenxia from the Xishan Mining Bureau were arrested on August 29, 2022 by officers from the Xiaojingyu Police Station in Wanbolin District. The three practitioners returned home the following day and were told they would be placed under residential surveillance.

Officers from the Tiechang Town Police Station, along with community management office members, have frequently gone to practitioners’ homes to take pictures, confiscate pendants, or tear down calligraphy artworks with Dafa messages written on them.

The officers repeatedly broke into the home of Ms. Chang Chengxiang (who is deceased). They rummaged through the house, but failed to find anything they wanted. They took Ms. Chang’s husband to the police station and planned to detain him for five days. They had to release him because he had to take care of his two grandchildren.

At 8 p.m. on August 13, several officers knocked on the door of elderly Ms. Li Shourong’s home and restrained her by grabbing her arms. The remaining officers rummaged around and confiscated calligraphy artworks with Dafa messages, and pendants from the walls.

On August 14, the officers broke into the home of Gu Shilan and confiscated a Falun Gong book.

After 8 p.m. on August 14, the police knocked on the door of Mr. Liu Jianhua’s home. He did not open the door.

Ms. Ma Changqing was caught on surveillance cameras when she was in the Yushu Traditional Chinese Medicine Hospital posting Falun Gong materials on August 10 or August 11, 2022. She was arrested and taken to Changchun City. It’s not clear where she is being held. Her daughter, who has epilepsy, was taken to a nursing home in Gongpeng Township.

Ms. Jiang Qingzhi from Daquzhuang Village, Biguo Town, was arrested and taken to the Biguo Town Police Station on August 30, 2022. The officers asked Ms. Jiang whether she knew practitioner Wang Huayang, and whether she’d contacted Wang. The officers tried to solicit information related to Wang in order to bring charges against Wang. Ms. Jiang was released that day.

Two officers from the Xige Town Police Station went to the home of Ms. Feng Shu’ai at 6 p.m. on September 5, 2022. They said that when they got there earlier that day, in the morning, no one was at home. They wanted to take pictures of Ms. Feng, which she refused. They told her that they were sent by their superiors, and took a picture at the door of her home before leaving.