(Minghui.org) Today's news from China includes incidents of persecution that took place in 11 cities or counties in 8 provinces, where at least 22 practitioners were recently persecuted for their belief. 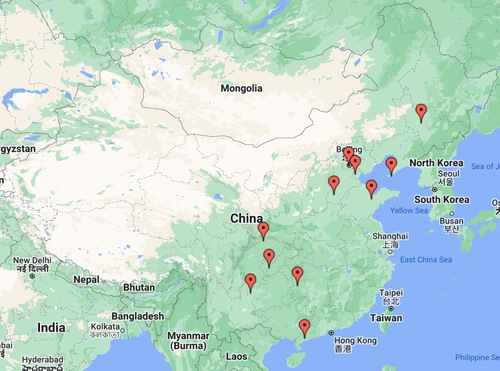 Mr. Yu Fujiang, 59, was arrested in late June 2022. He was held in the Xingtai City No. 1 Detention Center for over two months. His case has reportedly been transferred to the procuratorate and court.

Mr. Yu and three other practitioners were reported to the police while hanging Falun Gong banners in Yuanjiazhuang Village, Huangsi Town, Xingtai County, on September 12, 2018. They were arrested. The other three practitioners were each sentenced to eight months in prison. On the day of his arrest, Mr. Yu escaped from the Xingtai County Domestic Security Division. He remained displaced until his arrest in late June 2022.

Ms. Zhang Rongxiu from Xiditou Town in the Beichen District was arrested by officers from the Xiyuzhuang Police Station for hanging Falun Gong banners on trees in March 2021. She was released on bail.

In this round of the zero-out campaign targeting Falun Gong practitioners, officials with the Xiditou Brigade first talked to her and pressured her to sign the three guarantees not to practice Falun Gong. When she refused, the officials confiscated her house and reopened the case regarding her hanging Falun Gong banners. She was tried via video link on September 10, 2021, and was sentenced to five years in prison.

Ms. Zhang was admitted to Liqizhuang Women’s Prison on August 24, 2022.

On May 11, 2022, Ms. Li was caught on surveillance cameras posting “Falun Gong is good” stickers. She was arrested and her home ransacked. She was later released on bail.

The Fangzi District Domestic Security Division has brought charges against her, and her case has been transferred to the court.

Ms. Zhang Minzhi, who is from out of town, was doing odd jobs in Changchun City. Officers from the Sijianfang Police Station in the Luyuan District arrested her at 1 p.m. on September 4, 2022, when she was taking care of a seriously ill practitioner in Building 5, Dayingzi Village. The officers confiscated all her Falun Gong books and photos of the founder of Falun Gong from the practitioner she was taking care of.

Around 3 p.m. on August 17, 2022, police officers and domestic security personnel suddenly broke into Ms. Luo Ling’s home in the Taoranting area of the Xicheng District. They claimed that someone reported to the police that she participated in group activities. They ransacked her home and confiscated her Falun Gong books.

Ms. Liu Chunying was arrested by Wanli Police Station officers when she talked to people about Falun Gong in the Jinzhou Development Zone a few days ago. She was released due to the pandemic, but the police said she would be re-arrested after the pandemic was over.

Ms. Jiang Zhonghui, in her 70s, was arrested by officers from the Hutian Police Station. Ms. Yang Guihong, Mr. Wang Minghong, and four other practitioners were also arrested.

Zhang Hua, deputy head of the Huaihua Domestic Security Division, and five or six plainclothes officers knocked on Ms. Tan Jianyang’s door. Ms. Tan did not let them in, and after a long standoff, the officers could not open the door and left.

Pan Jingjun, an official with the Niulujia Village Committee in Poxin Town, and others went to Ms. Lai Liang’s home at 2 p.m. on September 2, 2022. They took pictures and pressured her to sign paperwork, which Ms. Lai refused to do.

The police have been collecting information about people in connection with Mr. Tan Shouli in an attempt to build up a major case that could help the careers of the officers involved.

At present, people known to have been implicated in Mr. Tan’s case include: Liu Fengrong, Zhao Ping, Wu Zhiming, Hu Jinfeng (also known as Li Xuan), Yin Guiqin, Chen Yuying, and practitioner Wang, among others. The authorities worked on issuing warrants to arrest these practitioners, but they did not go through.

On July 23, 2022, a “special task force” organized by the Lizhou District Police Department arrested several practitioners and searched their homes.

Mr. Tao was arrested when he left his rented house at noon, and his home was ransacked.

Elderly Ms. Zhao and Ms. Liu, who live in the Xuefeng Sub-district, were arrested and their homes ransacked, Ms. Zhao’s in the afternoon and Ms. Liu’s in the evening. Their Falun Gong books, computers, printers, printed materials, and paper bills with Falun Gong facts written on them were confiscated.

Other practitioners were later arrested and their homes were searched. Further details are still pending.