(Minghui.org) Today's news from China includes incidents of persecution that took place in 11 cities or counties in 5 provinces, where at least 23 practitioners were recently persecuted for their belief. 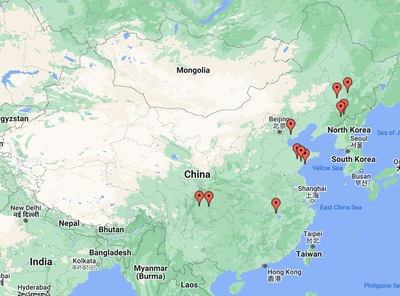 Ms. Liu Jingxiu, 70, was arrested in late June 2022. It was not clear why she was arrested. It was later learned that she was held in the Changchun City Detention Center. However, there was no information about her after some time, and she never spent the money deposited for her. Now detention center staff say that she was not sent there.

Officers from the Baiqi Police Station broke into practitioner Wang’s home in Kongtun Village around 6 a.m. on August 23, 2022. They confiscated Falun Gong books and arrested the Wang couple.

Ms. Liu Shuhua and Yu Xianhong were also arrested around 6 a.m. on August 23.

Other practitioners were harassed.

Mr. Liu Junhua, a college student from the Shili Sub-district, Lianxi District, was reported to the police for talking to people about Falun Gong. He was arrested by officers from Lianxi District Domestic Security Division. Further details are not available.

Since July 2022, the 610 Office of the Sichuan Province Political and Legal Affairs Committee and the 610 Office of Chengdu City Political and Legal Affairs Committee have ordered police stations, sub-district administration offices, and neighborhood committees, on the grounds of “ensuring the success of upcoming Chinese Communist Party 20th National Congress while maintaining public security and stability,” to continuously harass and threaten practitioners and their families, and to pressure them to sign commitment letters renouncing Falun Gong.

On August 12, 2022, Ms. Xu Yuqing and her daughter in Qingbaijiang District were at home when people loudly pounded on their door. They were afraid to open the door. These people then cut off the electric supply to her home. Southwest China was hit by a heatwave those days, and it was extremely hot inside Ms. Xu’s home. She came out to check the cause of the power outage. These people rushed over and took her to a “care center,” where they pressured her to sign the commitment letter.

Ms. Zhu Biling and her sister Ms. Zhu Pinshan from Qingbaijiang District were harassed. Ms. Zhu Biling has been retired for years, but her original work unit asked her to continue to work in order to supervise her. One day in August, the leaders of her work unit and people from the care center took her to the center and pressured her to sign the commitment letter. They told her that she would not be allowed to leave unless she signed it.

Ms. Zhu Pinshan was pressured to sign paperwork at home.

Ms. Zheng Mei’e was arrested by officers including Huang Shaohui from Hanting District Domestic Security Division on May 12, 2022. The officers ransacked her home and confiscated a computer, a printer, and printed materials. On May 13, Ms. Zheng was released on bail after her family was extorted 10,000 yuan.

Ms. Zheng did not cooperate during the interrogations. Officer Huang told her family to persuade her to give up practicing Falun Gong, plead guilty, and accept punishment. He threatened that her refusal to cooperate fully would result in a severe sentence.

On the morning of July 14, the officers called Ms. Zheng’s family to go to the Domestic Security Division and instructed them to bring Ms. Zheng with them in the afternoon. As a result, Ms. Zheng left home and became displaced.

On August 4, Huang and another officer Zhang Longshou delivered paperwork to Ms. Zheng’s home, which stated that the 10,000 yuan deposit for her release on bail was confiscated. They threatened her family that she would be detained as soon as she was caught.

Five or six officers broke into Ms. Feng Xianzhi’s home around 10 a.m. on August 11, 2022. After entering the house, they ran directly to a small room, where they found and confiscated six Falun Gong books and photos of the founder of Falun Gong. They arrested Ms. Feng and took her to the Minzhu Police Station. Ms. Feng was released around 3 p.m. that day.

July 15 was the seventh day that the four practitioners were placed under administrative detention when they were supposed to return home. That morning, however, they were again taken away by officers from the Shuiwuzhuang Police Station, the Chadao Police Station, and the Wali Police Station, in Kaiping District. They were held in the Tangshan City No. 1 Detention Center.

On August 19, Ms. Ji, Ms. Du, and Ms. Guo were released on bail. Ms. Wang was officially placed under arrest by the Kaiping District Procuratorate.

Ms. Chen Ying, in her 50s, distributed information about Falun Gong on Ziwei Street on the morning of August 11, 2022. She handed a printout to plainclothes official, who arrested her and took her to the Zhenjiangsi Police Station. She was interrogated and her home was ransacked. Dozens of Falun Gong books were confiscated. Ms. Chen was released that afternoon.

On the morning of August 18, 2022, officials in Pingdu City asked Shangjiatuan Village officials to go to the company where Ms. Hou Dongmei worked. The village officials found her boss and told him to get her to sign a guarantee statement. Ms. Hou refused to sign it.

Ms. Qin Shaohua was caught on surveillance cameras when she was distributing Falun Gong materials at the end of May 2022. She was arrested and taken to the Chaoyang Police Station. She was released on bail on May 31.

Ms. Liu Chunling was arrested by officers from the Nancheng Police Station on July 26, 2022. The officers tricked her into opening the door and arrested her by posing as network cable repair people. They ransacked her home but did not find anything they were looking for. She was later released.

Ms. Qu Zhiyan was arrested at a residential community on July 26. The officers ransacked her home but did not find anything they wanted. She was later brought back home by the officers. Under mounting pressure, Ms. Qu’s husband beat her violently in front of the officers.

On August 19, practitioner Xu was arrested after buying dried tofu in the market. Further information is pending.

On August 19, 2022, officers from the Jiangbei Police Department suddenly went to Ms. Zhang’s vegetable field in Jinying Village and arrested her. She is the second elder sister of practitioner Ms. Zhang Jiaqi who passed away. The officers ransacked her home and confiscated a large number of personal items.

On the same day, Ms. Zhang suffered a heart attack and was admitted to the city hospital, where she was taken care of by her family.