France: Practitioners Are Grateful for Master’s Saving Grace and Wish Him a Happy Mid-Autumn Festival

(Minghui.org) Falun Dafa practitioners in France took a group photo and wished revered Master Li a happy Mid-Autumn Festival on September 7, 2022, in front of the Arc de Triomphe, a symbol of success and victory. Practitioners expressed their gratitude to Master for his saving grace. They said that they only way they can thank Master is by seizing the time to cultivate themselves well and save more people. 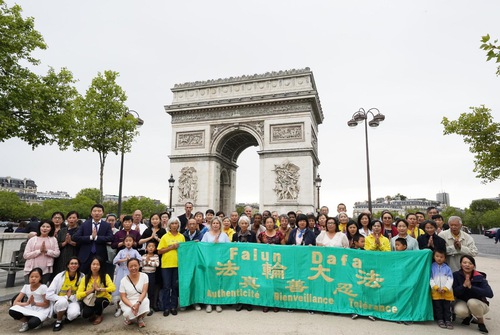 Practitioners gathered in front of the Arc de Triomphe on September 7 to wish Master Li a happy Mid-Autumn Festival.

Mr. Wang, a doctoral advisor at a university in France, began to practice Falun Dafa with his wife in 1997, after seeing his mother, who used to suffer from poor health, become completely healthy after practicing Dafa.

Mr. Wang recalled how he let go of his attachment to fame during the early days of his practice when he was studying for his doctorate degree. When he was going through a painful experience, he understood from Dafa’s principles that he should go with the flow and that if it’s yours, you won’t lose it, and if it’s not yours, you can’t earn it no matter how hard you try. However, in the face of immediate practical self-interests, the lure of fame, and the tug of emotions, the pain he felt seemed to cut through his heart. 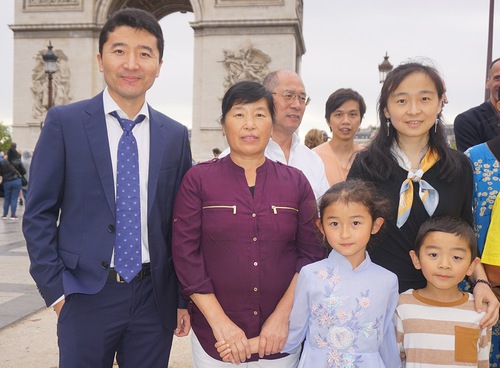 His understanding of the teachings has steadily improved through years of cultivation. He feels that his heart has become more and more tranquil, and he can now handle the challenges of fame and fortune calmly. He said, “Actually, when my heart became more solid and at ease, the fame and fortune I had been striving for and the results I was expecting came to me without me noticing it.” As a doctoral advisor, Mr. Wang follows the principles of Truthfulness, Compassion, and Forbearance to cultivate himself at all times. He feels that he is now more tolerant and happier. 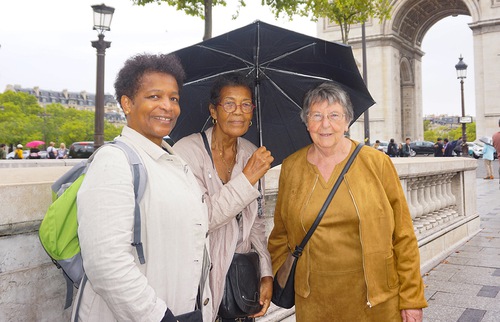 September 7 was filled with first experiences for Ms. Alex, 84, who lives in Guadeloupe (a French overseas region). She came to Paris for the first time to take photos with other practitioners and to wish Master Li a happy Mid-Autumn Festival. Luckily, she met Anita, who now lives in Paris. Ms. Alex practiced with her in Guadeloupe and helped her truly begin to cultivate. She also met Véronique, who began to practice Falun Dafa after Ms. Alex gave her a flyer. Véronique had also moved to Paris. The three reminisced about their experiences when they cultivated together in Guadeloupe and they sincerely thanked Master for his saving grace.

Ms. Alex recalled that she was tortured by insomnia before practicing Falun Dafa. She looked into many treatments but nothing helped. She found a traditional Chinese medicine doctor who suggested she try practicing qigong. By chance, she found Falun Dafa. She said that, after listening to Master’s nine lectures, she completely recovered from insomnia and slept soundly every night. Dafa was planted in her heart. Although she is in her 80s, she reads the books, does the exercises, sends forth righteous thoughts, and tells people about the persecution in China.

Christine, who works in the finance department of a university in Paris, has tears in her eyes when she talks about her gratitude to Master. Before she began practicing, her mother’s sudden death hit her very hard. For nearly a year, she wept whenever she thought about her mother. It was a heart-wrenching pain. She said, “At that time, I always wondered why people lived. Why did they die? No one could explain it to me.”

A good friend called her one day and said, “I found what you’ve been looking for.” She responded, puzzled, “I don’t know what I've been looking for myself, how would you know?” The friend brought her a copy of Zhuan Falun. She said after reading it, “Yes, this is what I’m looking for!” Her heart has opened up. She also understood that her mother had gone to where she should be. Life is a process and everyone has to leave the world in the end. The final result depends entirely on what we do in this life.

Christine now practices Falun Dafa and is always happy. She’s optimistic and believes that good will come as long as one bases what one says and does on Truthfulness-Compassion-Forbearance. Christine and the other practitioners said they are focused on telling people how wonderful Falun Dafa is.