(Minghui.org) The Stampede Parade, one of the largest parades in North America, returned to Calgary on July 8, 2022, after a two-year hiatus. Falun Dafa practitioners participated in the parade, and their huge float won praise from spectators.

The Stampede Parade is an iconic part of Calgary’s cultural identity, and this year about 4,000 people from 100 groups participated. Among them were cowboys, previous Stampede Festival queens, elected officials, community groups, mounted police, and marching bands. The route is 5 kilometers long (3.1 miles) and the parade takes four hours to complete. It attracted about 300,000 spectators to the streets, and about 400,000 television and Internet views.

The Falun Dafa contingent had an exercise demonstration group, a large float, and a waist drum group. Wherever they went, they won applause and cheers, and spectators often called out: “Falun Dafa is good!”

The team was led by a banner that said “Falun Dafa” and was followed by 20 practitioners from Calgary, Edmonton, and Vancouver in yellow and white uniforms to demonstrate the Falun Dafa exercises. Behind the exercise demonstration group was a giant boat float with girls in celestial maiden costumes sitting on lotus flowers. The Falun Dafa procession ended with a 50-people waist drum group. 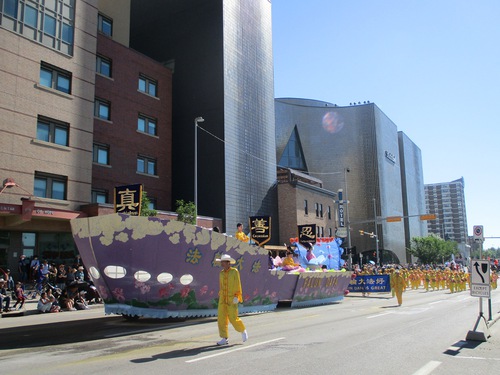 Falun Dafa practitioners from Calgary, Edmonton, and Vancouver participate in the Stampede Parade in Calgary, Canada, on July 8. 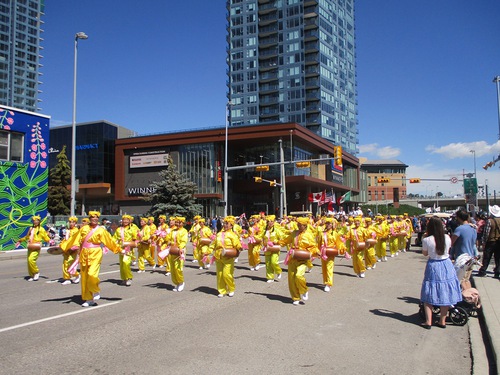 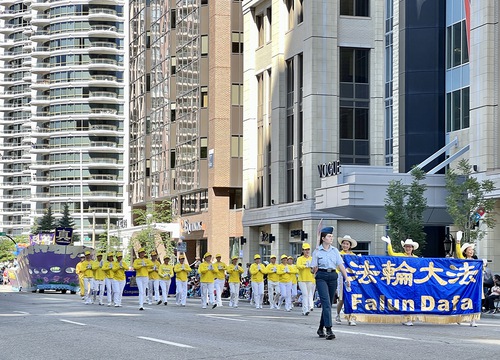 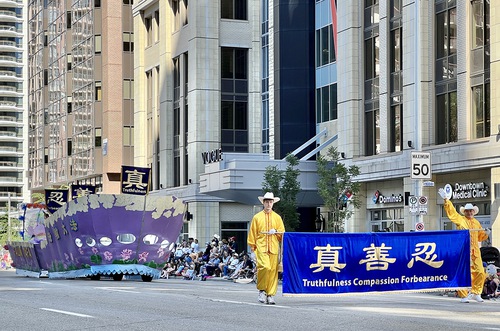 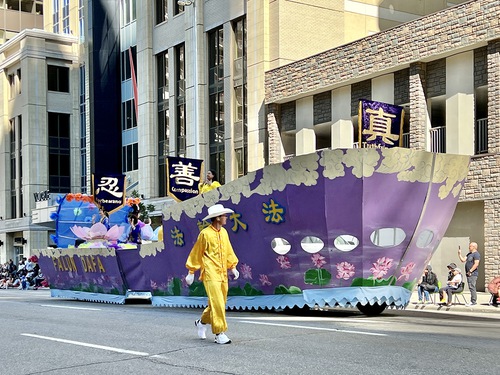 A local TV station, Global News hosted a live parade program and the Falun Dafa contingent was featured on its broadcast for more than three minutes.

The host introduced Falun Dafa as a traditional Chinese cultivation method rooted in the principles of Truthfulness-Compassion-Forbearance, and said that millions of people practice it in some 100 countries around the world. “It is a pleasure to see the Falun Dafa practitioners participating in the 110th The Calgary Stampede Parade!” the host said.

As the Falun Dafa float passed by, the host shouted excitedly, “Look at that giant boat! It was designed and built by local Falun Dafa practitioners. It is very elegant! Cool!”

The host also said that the waist drum team has been established for nearly 20 years, and waist drums have a history of 2,000 years in China. The performers’ beautiful golden silk clothes are a style from the Tang Dynasty, the most glorious era in Chinese history.

“The Falun Dafa group is so fascinating and very, very cool,” the host said.

Chinese spectator: “I am very proud!”

A Chinese man who moved to Calgary one year ago and has his own company in Canada was watching the Stampede Parade for the first time. He said excitedly that he had noticed that the Falun Dafa group was the largest of all and it is “a good demonstration of the traditional Chinese spirit of truthfulness, compassion, and forbearance.”

“I am very proud to see traditional Chinese culture in Canada, especially since it is not organized by that Party or that government,” he said.

He said that people can’t see such a parade in mainland China. “Whatever the wicked Party [the Chinese Communist Party] opposes is good. It is so fearful when people expose the truth and show true kindness. It’s because the Party is only good at deception, hypocrisy, and brutal suppression of the people, so it’s especially afraid of such voices and such displays.”

He felt that practitioners’ boat float carried a message. “The shape of a boat inspires me to think of how people should live in this world and how to move from one place to another, because in the sea, the boat is the only tool to ride the wind and waves, carry people to the other shore, rising from low to high,” he said.

Nathan Simon, a local resident, remarked, “Compared to the cultures I am familiar with, the Falun Dafa group is unique. I like it very much, it’s great! The waist drummers are quite good, the costumes are also beautiful, and the colors of the floats are particularly bright. This is my favorite parade entry!”

Joel Tupas works at an engineering construction company and had heard about Falun Dafa before. “Falun Dafa gives people peace of mind and relieves mental stress, and I want to try it,” he said.

Coordinator of the Falun Dafa contingent Lucy Lin talked about the design of the float, “The sail shows the composition of the colorful Falun among the blue sky and white clouds; the lotus pedestal in the middle is floating among the colorful clouds with pure and beautiful colors. We used a lot of lightweight yarn that flutters in the wind.”

Conductor of the waist drum team Alice Liu said that Falun Dafa has been brutally persecuted and slandered in China. “We want to show the beauty of Falun Dafa to every person. I hope they can learn the truth and have a bright future.”

Amy, a member of the exercise demonstration team, heard the audience shout aloud, “Dafa” and “so beautiful” in the Chinese language and saw people imitating the exercise movements and taking photos or videos. “Participating in such a large-scale parade in a free country and feeling the enthusiasm of the audience for Dafa, I was so impressed, so moved, that I almost cried,” Amy said.