(Minghui.org) Today’s news from China includes incidents of persecution that took place in 16 cities or counties in 9 provinces, where at least 31 practitioners were recently persecuted for their belief. 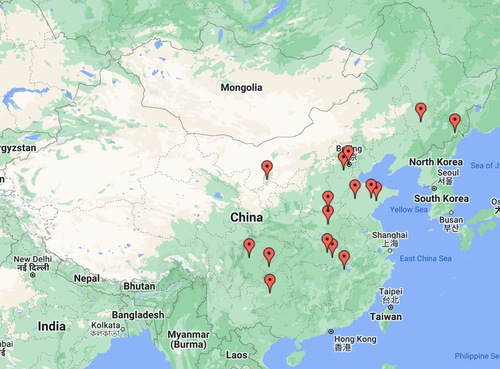 Officers from the Yuzhou City Domestic Security Division and the Huolong Police Station arrested Mr. Wang Yongsheng and his wife from their home on June 27, 2022. The police confiscated their personal belongings. Further information is pending.

Ms. Song Xiaohui, who is blind, was arrested on June 17 or 18, 2022, when she talked to people about Falun Gong. The police ransacked her home and confiscated her Falun Gong books, audio players, and some printed Falun Gong materials. She was held in the Changchun City Detention Center for 15 days.

Ms. Yang Jincai was arrested by officers from the Nanming District Police Station at her workplace on April 13, 2022. Her home was ransacked. Her Falun Gong books and many personal belongings were confiscated. It was learned that Ms. Yang was held at the Nanming District Sanjiang Detention Center and was denied family visits.

Ms. Hao Xiuying and Ms. Zhang Suqin were arrested by officers from the Beiyunmen Township Police Station when they talked to people about Falun Gong on June 14, 2022.

Officers from the Guangming Police Station in Helong City broke into the home of Ms. Li Jie’s mother on June 25, 2022. They arrested Ms. Li Jie who was cooking, and ransacked the place. They then went to Ms. Li’s home and ransacked her home. They confiscated her Falun Gong books, audio players, and printed Falun Gong materials.

Ms. Li was arrested and had her home ransacked in May 2021.

Ms. Liu was held in the Laishui Police Station for about ten days and was then transferred to the Laishui County Detention Center around March 27, 2022.

On May 13, 2022, she was transferred to the Baoding City Detention Center. She was denied family visits. It was learned that Ms. Liu has held several hunger strikes to protest the illegal arrest and detention.

Ms. Yan Li, from Gaomi City, has been staying with her daughter in Weifang city for several years. She was harassed by officers from the Xiguan Police Station of Gaomi City on June 25, 2022. They attempted to take Ms. Yan back to her home in Gaomi City, but Ms. Yan resisted. The police then pressured Ms. Yan’s son-in-law to go back to Gaomi city and open Ms. Yan’s home for them. They searched the place inside and out but did not find anything they wanted.

Li Xinming (gender unknown) was reported to the Chaotianmen Police Station for talking about Falun Gong to a driver on June 24, 2022. Around 8:00 p.m. that night, the power supply to Li’s home was suddenly shut off, and then officers from the Kaizhou Domestic Security Division, the Chaotianmen Police Station, and the Kaizhou Comprehensive Management Office broke into the place. They confiscated a photo of Falun Gong’s founder, Falun Gong books, printed Falun Gong materials, and several audio players.

They then took Li Xinming to the Chaotianmen Police Station for interrogation. The officers pressured Li to sign statements renouncing Falun Gong, to which Li refused. Li returned home that night.

Ms. Li Shuang, around 30 years old, a Hebei Province native working in Beijing, has been detained in the Xicheng Detention Center for nearly three years. It was reported that Ms. Li has been experiencing a medical condition.

Two officers from the Gusaoshu Police Station went to Ms. Chen Jun’s home. They photographed the place as soon as they came in. Ms. Chen was not at home at that time. They told Ms. Chen’s husband to keep her home.

Officers from the East High Speed Railway Station Police Station frequently harassed Mr. Zhang Jintao’s family. His family was pressured to ask Mr. Zhang, who stayed away from home to avoid further persecution, to come home. Mr. Zhang was harassed by the authorities as soon as he came home, so he had to leave home again to avoid further harassment.

They then ransacked her home and confiscated her Falun Gong books and materials. They said they located Ms. Li by using the surveillance camera installed on the street. Ms. Li was interrogated for the source of the materials. She was released that day.

Nine officers from the Gaomi City Jiaotong Police Station broke into the home of Mr. Du Gelin and Ms. Liu Honghong on June 24, 2022. They arrested the couple and confiscated their Falun Gong books.

The same day, the police arrested six of Mr. Du’s family members, including his two brothers, two sisters-in-law, his sister, and brother-in-law. They were detained for one and a half days.

Officers from the Xiazhuang Police Station broke into the home of Ms. Liu Honghong’s brother and arrested her sister-in-law. She was detained for one day.

Mr. Du and Ms. Liu are currently detained in the Xiaokanghe Brainwashing Center.

Officers from the Wanjiawan Police Station in Qingyang District harassed Ms. Wang Qionghua numerous times on the phone and in person around June 23, 2022.

An officer in plainclothes pressured her to write a statement to renounce Falun Gong. She refused.

Afterward, more than ten people, led by Long Yong from the local Police Department, went to Ms. Wang’s home. They forcibly grabbed her arms and hands and attempted to put her fingerprints on a statement. They failed because Ms. Wang resisted hard. Ms. Wang’s arms and hands were bruised.

The police also poured a pot of dirty water over Ms Wang’s head to pressure her to give up her faith in Falun Gong. They threatened her and told her not to tell other people what they did to her.

Ms. Wei Denghui, Ms. Deng Subi, and Ms. Dong Jinzhi from Qingbaijiang District were arrested by officers from the Jintang County Political Security Office and the Shuicheng Police Station. They were interrogated and subjected to medical exams.

Ms. Deng and Ms. Dong were detained in the Shuicheng Police Station for nearly 20 hours before being transferred to the Dawan Police Station in Qingbaijiang District.

The police ransacked both practitioners’ homes and confiscated their Falun Gong books and computers. They also confiscated 3,000 yuan in cash from Ms. Dong’s home.

Ms. Deng and Ms. Dong were then placed under residential surveillance for six months.

Ms. Dai Xuefen, who visited Ms. Dong on June 1, 2022, was also arrested the same night. She was detained in the Shuicheng Police Station for one day and one night. The police confiscated her purse.

Mr. Kang Hong was arrested at his workplace on April 25, 2022. His rented home was ransacked and his personal belongings, including 2,000 in cash, were confiscated.

He was taken to the Xietaizi Police Station and detained for 15 days before being transferred to the Chongqing No. 2 Detention Center.

Mr. Kang returned home on June 12, 2022, but was placed under residential surveillance.