(Minghui.org) Carolina Avendano, a 24-year-old undergraduate at the University of Calgary, says she had a life-changing experience 18 months ago. 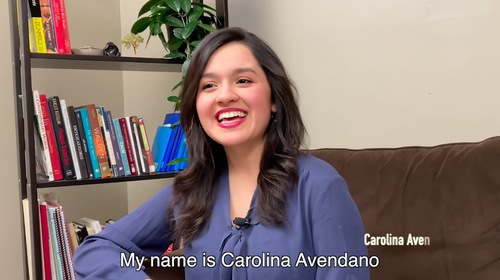 Carolina said she had been attending the University of Calgary for nine months in November 2020, when she got a flyer about Falun Dafa in a cafe. Due to the pandemic restrictions, she could only attend classes online and wasn’t able to socialize with her classmates. Being cut off from her family distressed her even more.

“I spent most of my time alone in my apartment,” said Carolina. “Back then, I was dealing with an eating disorder. My family was also having issues. My mom is in Colombia and I haven’t seen her for six years. My father was stressed, but he lives in another city. My sister is married, but we couldn’t see each other because of the lockdown.”

Despite growing up in a traditionally Catholic family, Carolina was influenced by feminism and materialism. She believed that getting started early and working towards success was the most important thing in life. She kept herself busy and productive—living independently, working two part-time tutoring jobs, volunteering online, and studying math and education in college.

Instead of making her feel less lonely and empty, her busy schedule was taking a toll on her physically. From dieting all the time, she was underweight and ended up with an eating disorder and headaches. Her period stopped for over a year.

“I kind of lost my soul in the process,” said Carolina. “I was overworked and felt burned out. I had no peace of mind. I started to have headaches. I couldn’t speak with my family at all on the phone. I felt anxious. I also avoided my friends. I was just so lost.” Seeing her thin face when they talked online, her family was worried.

After Carolina got the flyer, she watched the informational videos on the internet and learned about Falun Dafa (also called Falun Gong) and the difference between Falun Dafa and Tai Chi. The free online class described in the flyer interested her. She said this was exactly what she was looking for, so she decided to sign up for an online class and started learning the exercises.

“I was so excited. I saw the way they moved their hands.” She practiced the exercises herself after the class.

Just three days later, she was surprised to find that her period, which had stopped for more than a year, returned. “I was happy and a little stunned,” she said. “I thought, ‘Wow, this is no coincidence. It’s unbelievable!’”

Another coincidence happened a few days later. On business in a building far from the campus, she saw a poster about a movie hosted by the Friends of Falun Gong Club at the University of Calgary. She called the head of the club and was invited to the screening of a movie about the Chinese Communist Party’s (CCP) persecution of Falun Gong. She said, “I learned about the persecution from that movie. The persecution is crazy.”

Carolina later attended a nine-day free teaching session online to watch a video of Master Li Hongzhi’s teaching the Fa. She then began to do the exercises with a group in downtown Calgary every week. A friendly practitioner gave her a copy of Falun Gong in English. Another practitioner called her and invited her to participate in an online group to study the teachings. That was how Carolina began to practice Falun Dafa. 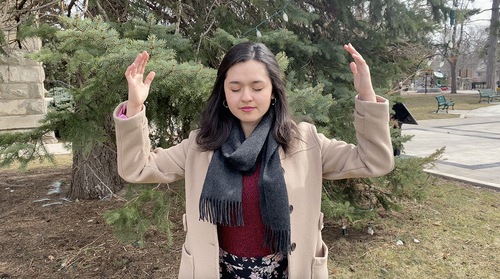 At the same time her body was changing after she began to practice, Carolina felt that her mindset was also undergoing great changes. Carolina had cut her hair short because she lived alone in a building surrounded by male students. “I felt vulnerable, because a lot of them were looking for different things and sometimes they knocked on my door. So I cut my hair short—I didn’t want them to see me as a woman.”

After she began practicing, Carolina let her hair grow back. She also found that many old grudges she had against members of her family were disappearing.

She thought about her parents’ difficulties: her father, who lived in Edmonton, was going through a difficult time dealing with a lawsuit over a family dispute. Her mother in Colombia was suffering from hypothyroidism.

After she began practicing Falun Dafa, Carolina realized that she had to respect her parents. “They gave me life and raised me.” She understood the difficulties she faced were actually cultivation opportunities, “So, instead of being caught up in their problems, I just put myself aside and helped them.”

She helped her father a great deal and started calling her mother more often, letting her know she cared. Gradually, her mother’s health improved.

She used to focus more on material things and always evaluated herself by how well she did at work. “If I couldn’t finish a task, I felt guilty and worthless. I felt so empty. I judged myself too much. It seemed like I thought the meaning of life was to get a job, be successful in my career, and travel the world.”

She said that she has completely changed. She is no longer attached to her career or job but, instead, seeks inner peace. 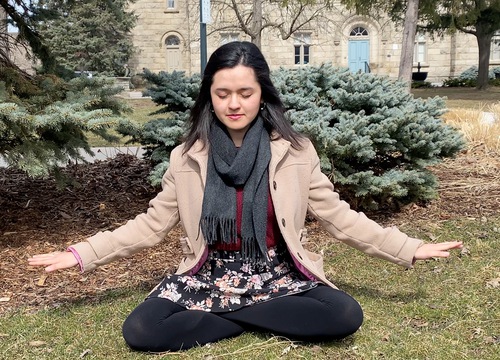 Her positive changes made her parents happy. They knew that Carolina was happy because she practiced Falun Dafa, so they began to support Falun Dafa.

“After a two-year pandemic and a year and a half of cultivation, I just feel so fortunate,” said Carolina. “Master Li’s compassion is boundless and everywhere. I live with my father now. His support of Dafa brings him so much harmony and peace. I am sure it’s because he supports Dafa. He helped me with the video and other Falun Dafa activities. Falun Dafa is powerful.”

She said it was the first time she’d ever seen so many practitioners when she went to Ottawa to participate in the 30th anniversary celebration of Falun Dafa’s public introduction to the world. “I feel honored that I found Dafa, and I am sure it was a predestined relationship. I am really honored I can be a part of it.

“I really admire Chinese practitioners. I am learning more about what they do. I admire the example they give with their lives and the suffering they’ve been through and the strength of their faith. It’s so inspiring. My generation is so materialistic and wants pleasure and superficial things.

Carolina believes that many people in the world today harbor perverse and degenerate concepts. If they can realize that human nature is pure and kind, they will understand and agree with Falun Dafa.

“Falun Dafa makes me realize that we are flawed, that we have attachments, and that we are filthy in a way. But we have to return to our true selves. Falun Dafa has given us the opportunity to cultivate and improve. This is just priceless.”