(Minghui.org) Today's news from China includes incidents of persecution that took place in 10 cities or counties in 6 provinces, where at least 21 practitioners were recently persecuted for their belief. 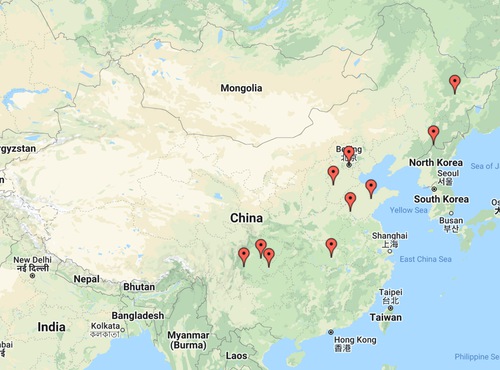 Ms. Liu has been held in the Jieshi Detention Center. Her case was turned over to the Jiulongpo District Procuratorate. She will be prosecuted.

People in plainclothes waited near where practitioners met to read the Falun Gong teachings in the Huashan Sub-district around 8 a.m. on May 10, 2022. They waited right outside the elevator door. Whenever a practitioner stepped out of the elevator, he or she would be arrested and taken away. They ransacked practitioner Ms. Tian Chunfang’s home. They confiscated two laptops, a printer, photos of the founder of Falun Gong, and several thousand yuan worth of paper bills with Falun Gong facts printed on them.

It was likely that a total of six practitioners were arrested. They were taken to the Jiufeng Police Station. The police intended to detain them for 10 days, but the detention center refused to admit them due to the pandemic. By noon on May 11, three of the practitioners had been released. The fates of Ms. Tian and the other two practitioners are unknown.

Ms. Chen Jihuan, 68, lives in Yonghe Village, Daotaiqiao Town. Four police officers ransacked her home on the morning of May 6, 2022. They confiscated two copies of Zhuan Falun, several other Falun Gong books, weekly publications, and 10,000 yuan in cash. Then they ordered Ms. Chen to take them to her son’s home. They searched it but they did not find what they were looking for.

They took Ms. Chen to the county police department, where they printed a list of confiscated items for her to sign, which she refused to do. They said, “Given the pandemic, you can go home for now. Once the pandemic is over, you have to come back and spend 15 days in detention.” Ms. Chen returned to her son’s home the following morning.

On the morning of May 11, 2022, Zhang Xiaosheng, a procuratorate official and other procuratorate staff members went to Ms. Qi Gui’e’s home and told her to go to the procuratorate. They said they had to ask her about her previous case when she was arrested at Ms. Hou Yuelan’s home on May 11, 2020.

These same people called and harassed Ms. Qi’s daughter, who was in graduate school in another city. To avoid further disrupting her daughter’s studies, Ms. Qi went to the procuratorate, where she continued to clarify the truth to them. Zhang said Ms. Qi would be on “medical parole” for a year and that they were sending her case to the court.

Liu Yantao, deputy director of the Quanhe Police Station in the Huairou District, and seven or eight officers went to Ms. Zhang Xiuhua’s home around 4:30 p.m. on March 15, 2022. They showed her a search warrant and a summons and ransacked her place. They confiscated a copy of Zhuan Falun, several recent articles written by Master Li, a mobile phone, a Falun Gong seal, and a few amulets.

Since Ms. Zhang’s blood pressure was too high to admit her, officer Sun told her to see a doctor first and then go home, but she had to return to the police station at 9 a.m. the next morning. At 10 p.m. that evening her husband took her home.

At 9 a.m. the next morning, officer Sun picked Ms. Zhang up, took her to the detention center, and locked her in a tiny room to wait to be questioned. They took her to the interrogation room at 5 p.m. They presented a transcript of her interrogation the previous day for her to read, which she refused to do. They then announced: “You will be detained for three days.” She failed to pass the physical exam, so the detention center would not accept her and she was released on bail.

Four men and one woman went to Ms. Yan Caiying’s home at 10 a.m. on May 11, 2022, and asked if she distributed Falun Gong materials. They ransacked her home and confiscated several Falun Gong books, a desk calendar, and a music player. They photographed her and forced her to sign paperwork, threatening to arrest her if she did not.

Three plainclothes officers from the Dongchan Police Station in the Anju District went to a residential community in the city center at 11 a.m. on May 11, 2022. They showed photos of Ms. Tian Biying and a woman in her 90s whom Ms. Tian was taking care of and asked people for more information. The officers ran into Ms. Tian and the elderly lady in a wheelchair that Ms. Tian was pushing. They took both of them to the residential management office and interrogated them. They told Ms. Tian to sign paperwork, which she refused to do. After questioning her for half an hour, she was told to take the old woman home for lunch.

Ms. Tu Kuijin’s family said that she was recently sentenced to four years in prison. Ms. Tu lives in the Jiangxia District.

In addition, Ms. Liang Shufang has not been heard from for several months since she was summoned by the police months ago.

Ms. Zong Ming, about 60, from the Qiaokou District is being held in the Wuhan City No. 4 Women’s Detention Center.

Ms. Jin Shuqin’s home was ransacked. Her Falun Gong books and photos of the founder of Falun Gong were confiscated.