(Minghui.org) Today’s news from China includes incidents of persecution that took place in 12 cities or counties in 8 provinces, where at least 18 practitioners were recently persecuted for their belief. 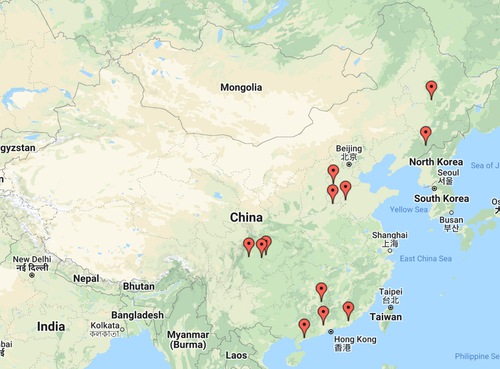 Ms. Huang Aihua, 59, from Jieyang city, did business in Dongguan city for years. She was arrested in 2021 because she talked to her customers about Falun Gong. The local police in Dongguan ransacked her home and confiscated her Falun Gong books.

Ms. Huang was held in the Dongguan City Detention Center. She was sentenced to three and a half years in prison and fined 30,000 yuan.

Ms. Jin Guizhi, 80, Cui Guixi, in her 70s (gender known), and Ms. Lin Zhenying, in her 60s, have been harassed repeatedly by officers from the Gaotang County Domestic Security Division. The officers filed charges against them to the Dong’e County Procuratorate. They were tried on April 20, 2022.

Ms. Li Chun’ai, Ms. Dong Chunlan, and Ms. Han Xiuju were arrested by the local police when they talked to people about Falun Gong. They were taken to the Shijiazhuang City Detention Center on April 18, 2022.

Mr. Li Bin, a 53-year-old Botou City, Hebei Province resident, was arrested at home on April 28, 2021, by officers from the neighboring province of Henan, about 250 miles away.

Mr. Li was sentenced to seven and a half years and fined 50,000 yuan by the Wenfeng District Court, an out-of-province court, in December 2021, for posting messages on his social media account.

Mr. Li pleaded not guilty and submitted his appeal. The intermediate court in Henan Province upheld the original verdict in April 2022.

On April 8, officers from the Fengyuan Police Station in Liwan District broke into Ms. Shi Huifeng’s home. They searched the entire place and confiscated her Falun Gong books and the photos of Falun Gong’s founder.

The police requested Ms. Shi’s daughter to go to the police. They interrogated her and asked her to sign some paperwork.

Six people, including Chen Zhihai, the deputy mayor of Lintou Town, Dianbai District, went to the home of Ms. Su Weiquan’s parents and harassed them on the afternoon of April 14, 2022. They pressured them to ask Ms. Su to renounce her faith in Falun Gong. They forced Ms. Su’s father to give them his cell phone and look up his contact information.

Three officers from the Sui’an Police Station broke into Ms. Tang Suqing’s home on April 16, 2022. They pressured her to sign a statement slandering Falun Gong, which she refused. They then threatened to arrest her if she did not renounce Falun Gong.

Officers from the Kangjin Town Police Station ransacked Ms. Zhu Hongfeng’s home on April 13, 2022. They confiscated her Dafa books, printers, computers, printing paper, and other personal items. They searched Ms. Zhu’s home for a second time on the same day.

Mr. Yang Rongsen is an engineer at the China Southwest Petroleum Bureau. He was arrested at the Chengdu North Railway Station on March 27, 2020, after he was found to carry 222 currency bills (worth over 1,000 yuan in total) with Falun Gong facts written on them. He was later released on bail. Mr. Yang was repeatedly harassed by officers from the Domestic Security Sub-team of the Chengdu Public Security Division. They later canceled his “bail pending trial” on March 25, 2021.

Ms. Zeng Qinling and Ms. Tang Xueying have been detained in the Chenzhou Prison Management Detention Center since October 4 and November 18, 2021, respectively. They have been denied family visitors since then.

They were virtually tried on April 11, 2022. Further information is pending.

The police found their home addresses and ransacked their homes in the afternoon.They confiscated three cell phones, Falun Gong books, audio players, computers, and printers from their homes and photographed all the items.

Ms. He and Ms. Li were detained for one day but were not allowed to eat anything. They returned home in the evening.