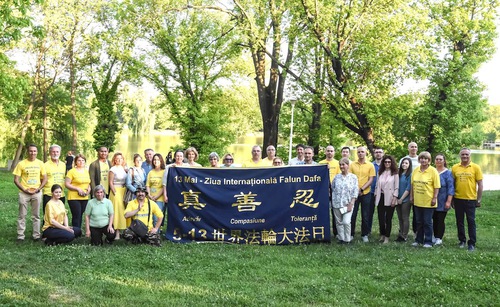 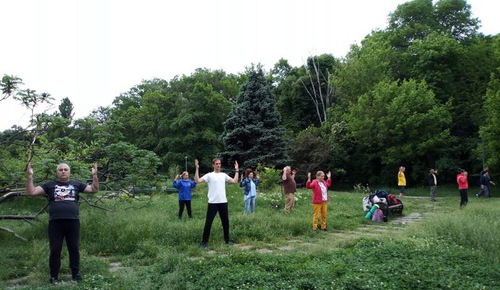 Demonstrating the Falun Dafa exercises in the park 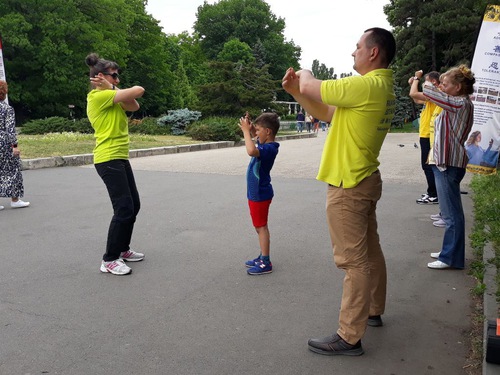 A young boy learns to do the exercises. 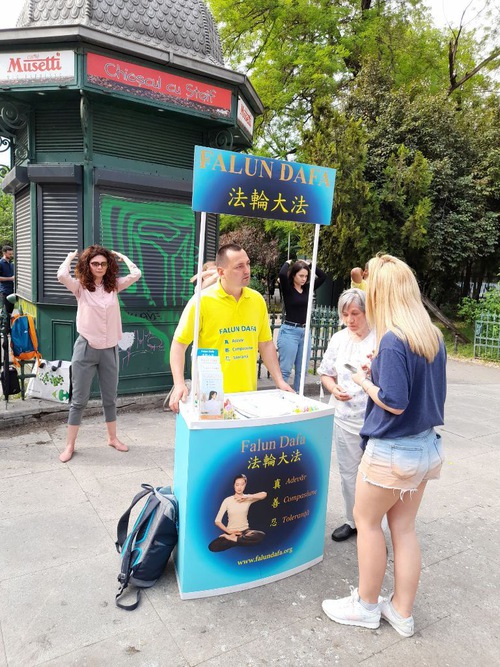 A tourist (right) listens to the facts about Falun Dafa

May 13, 2022, was the 23rd anniversary of World Falun Dafa Day and the 30th anniversary since Falun Dafa was first introduced by Master Li Hongzhi in China. By word of mouth, Falun Dafa has spread to over 100 countries. Hundreds of millions of people have benefited from practicing it and even from just believing that Falun Dafa is good.

Practitioners set up an information booth in Cișmigiu Park on May 14. A young man said that he knew about the ongoing persecution of Falun Dafa in China. He said that the Chinese Communist Party (CCP) is committing genocide targeting Falun Dafa practitioners. “If one can understand the truth, things will turn out for the better.” He condemned the CCP for persecuting practitioners and asked to sign the petition calling for an end to the persecution.

A young lady was attracted to the exercise music and said, “I felt sore all over, but after listening to the music, I felt calm and at peace.”

A group of young bikers came by and took truth-clarification brochures. When they heard about organ harvesting from living practitioners and that the CCP is persecuting people who follow Truthfulness-Compassion-Forbearance, they were shocked. They said, “Falun Dafa practitioners look very peaceful. You mean the CCP persecutes them for doing the exercises?” They were in disbelief and said, “Falun Dafa is good.”

A young man who asked a lot of questions about Falun Dafa learned that practitioners abide by the principles of Truthfulness, Compassion, and Forbearance and that the CCP forbids them to be spoken in China. He was upset and angry. He expressed his gratitude and asked to sign the petition calling for an end to the persecution. He said that he would take the information home and share it with his colleagues.

A man who once learned a form of qigong in Beijing watched practitioners do the exercises. He learned that Dafa is a cultivation practice of mind and body and that the practitioners were celebrating the 30th anniversary of Falun Dafa’s public introduction. The man became interested and asked to learn the exercises. He also asked where he could find a local practice site.