(Minghui.org) Falun Dafa practitioners held activities on Karlsplatz on May 14 to celebrate the 30th anniversary of Falun Dafa’s introduction to the world. They demonstrated the exercises, handed out information about Falun Dafa, and collected signatures on a petition to end the persecution of the spiritual practice in China. May 13 coincides with the founder, Mr. Li Hongzhi’s birthday. They took a group photo to wish him a happy birthday, and a happy Falun Dafa Day. 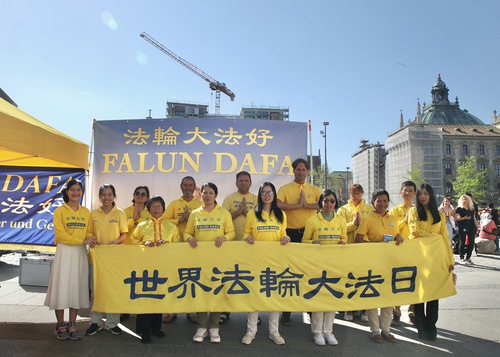 Spring was in the air and the sun shone brilliantly in the intensely blue sky. The practitioners dressed in yellow shirts were particularly eye-catching. Many people were drawn by their exercise demonstration, and stopped to chat. They wanted to know about Falun Dafa and where they could learn it.

Many people said they couldn’t understand why the Chinese Communist Party (CCP) was afraid of such peaceful exercises. Some asked why people weren’t allowed to practice Truthfulness-Compassion-Forbearance in China. When they learned about the CCP’s persecution of Falun Dafa they signed the petition to show solidarity with practitioners. 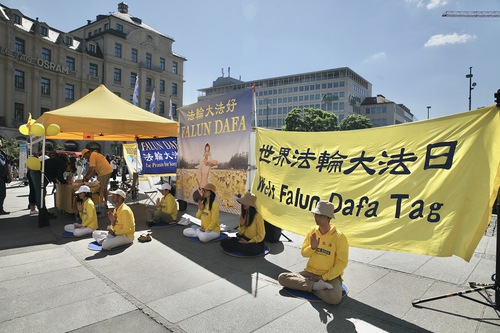 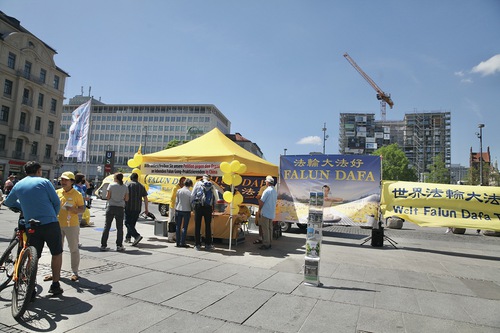 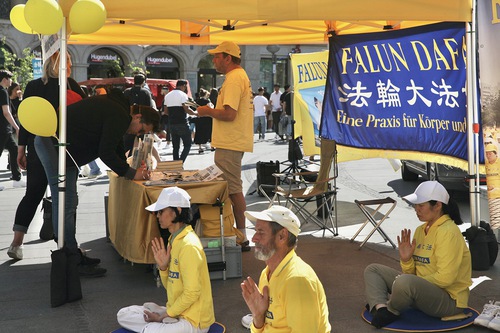 People sign the petition to protest the CCP’s persecution. 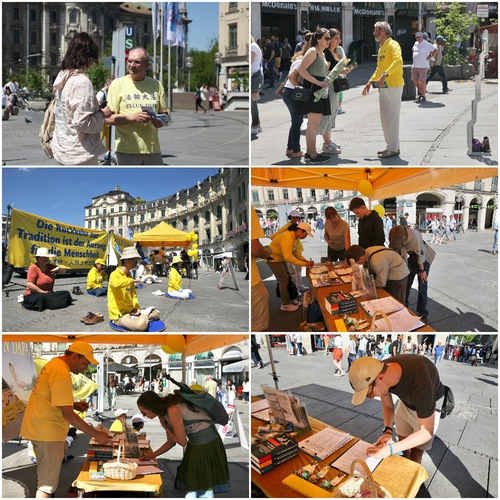 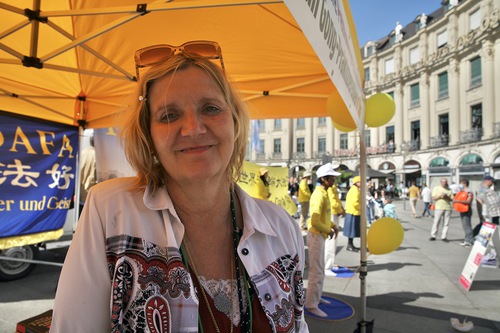 Ms. Martina Manz works at a hotel’s front desk. She passed by Karlsplatz and saw practitioners demonstrating the exercises. She said that they seemed very peaceful. After talking with a practitioner, she signed the petition to stop the CCP’s organ harvesting from practitioners.

“I oppose any forced organ harvesting,” said Ms. Manz, “It violates human dignity by buying and selling organs like a piece of meat.”

When she learned that the CCP does not allow people to practice Truthfulness-Compassion-Forbearance, she said, “It’s not good to ban people’s words and deeds. Disregarding people’s wishes and forcing orders from above are bad. Many people grow up in this environment. They are deceived by (the CCP), so they don’t think and express their opinions. So many people think this is normal and go along with it because they are used to it. It’s really sad.”

When Ms. Monika Veleti, a kindergarten teacher, noticed practitioners doing the exercises, she took the initiative to sign the petition at the booth. She said that she previously heard about the CCP’s organ harvesting from practitioners while they are alive and felt that it must be stopped. She said, “Maybe these signatures won’t work right away, but one day they will.”

Ms. Veretti said that she lived in the communist Czech Republic and knew the communist party very well. She said, “Every totalitarian regime persecutes people, doesn’t like the truth, and doesn’t want people to express their views.”

She said that the CCP’s oppression in Hong Kong and threats to Taiwan were obvious to everyone, “I don’t need to say more. I know about the rampant organ trade (in China). People can disappear like a grain of sand.” 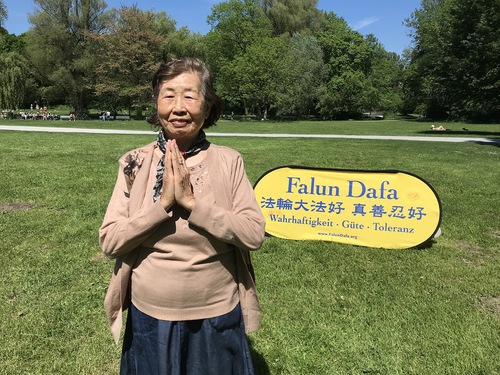 Pan Huiqin from Munich is 84 years old, and began practicing Falun Dafa in July 1995. “I am very grateful to Master,” she said. She explained that without Falun Dafa she might not be alive. Before practicing, she had skin diseases on her face. After half a year of treatment, it became worse.

For more than 20 years, she hasn’t had an injection or taken a single pill, and she is energetic every day. Occasionally she had some symptoms of illness karma, but soon recovered by practicing the exercises.

Ms. Pan has changed a lot, not only physically, but also mentally. “I used to like to eat, drink, play, sing, and dance.” She said that after practicing, she took those activities lightly.

Background: What is Falun Dafa and Why is the CCP persecuting It?