(Minghui.org) Today's news from China includes incidents of persecution that took place in 14 cities or counties in 8 provinces, where at least 23 practitioners were recently persecuted for their belief. 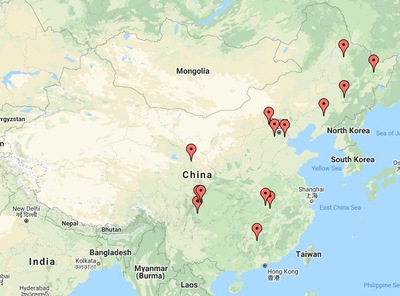 Ms. Fu Guihua was sentenced to seven and a half years in prison. On May 27, 2021, she was taken to the Jilin Province Women's Prison. On July 25, her family was notified that she had passed away.

The prison authorities pressured Ms. Fu’s family to cremate her body quickly and told them not to contact any lawyers. Cao Li, head of the prison administration section, pressured the family to prevent them from looking into the incident.

In addition, the relevant personnel of the Chengjiao Procuratorate kept delaying any investigation. Ms. Fu’s family still has not seen her body, nor have they learned the cause of her death.

Mr. Huang Min from the Dagang Oilfield in the Binhai New Area was arrested in Xiamen City, Fujian Province, in July 2019. Mr. Huang was recently sentenced to five years in prison.

In August 2021, Ms. Chen Baoqiong from Qianwei County was arrested again. She was arrested on numerous occasions and forced to have blood tests. Earlier this year, she was sentenced to two and a half years in prison and fined 3,000 yuan. After her arrest in August, she was taken to prison.

The cases against practitioners Ms. Ma Shufang, Wang Ying (gender unknown), and Ms. Lu Xiaojing were turned over to the procuratorate by the Tongbei Forestry Police Department. All three practitioners are scheduled to be tried by the Yabuli Forestry Procuratorate on August 16, 2021.

Practitioners in the Beihu District and Suxian District have been harassed by community management officials and other departments and were pressured to sign paperwork.

People from the Comprehensive Management Office, the Political and Legal Affairs Committee, and residential committees in Qifengdu Town, Suxian District, went to the home of Ms. Zeng Meixiang’s son and asked him where his parents lived. Ms. Zeng was spotted while posting Falun Gong materials and has since been forced to leave home.

Later, these people went to the homes of Mr. Wang Wulian and Mr. Wang Quanlian in the Jiedong Coal Mine in Qifengdu Town and pressured the two practitioners to quit practicing Falun Gong as required by the “zero-out” campaign.

On August 6, 2021, the Yongyang Police Station notified Ms. Song Shuhua’s family that she was arrested.

The director of the Xianghe Residential Community Committee in the Dagang Oilfield led people to Ms. Huang Xiufen’s home on June 2, 2021, and pressured her to sign paperwork.

Two days later, the residential committee director brought four people, including the director of the Hongqi Road Police Station, to Ms. Huang’s home and tried to persuade her to sign paperwork.

A few days later, the director of the residential committee took police officers to Ms. Huang’s non-practitioner daughter’s work unit. They brought a commitment statement and pressured her to sign it. Despite their threats from and her fear of these people, Ms. Huang’s daughter refused to sign the statement.

Two days later, the officers and residential committee director called Ms. Huang’s daughter and pressured her to sign the paperwork, otherwise, they said they would talk to the officials at her work unit. They also threatened that if she did not sign, they would force her mother Ms. Huang to sign.

During this short period of time, people from the community management and the police station harassed Ms. Huang and her family a total of five times.

Mr. Chen Yan, 59, was reported to the police while talking to people about Falun Gong on April 23, 2021. He was arrested by officers from the Beishan Police Station, Lingdong District. He is being held in the Shuangyashan City Detention Center. He will be tried soon by the Lingdong District Court.

Mr. Chen was arrested several times, sent to forced labor camps twice, and sentenced to prison once. He spent a total of nine years in prison or in labor camps.

Ms. Lei Yunqiong and her non-practitioner husband were taken by staff members from the Huaqing Community Management Office at 9:30 a.m. on August 6, 2021, to the Pengzhou City Care Center. The center was formerly affiliated with the 610 Office. Two people in their 30s in the care center were assigned to brainwash the couple. The couple returned home after 11 a.m. that day.

Ms. Zhang Zehui from the Huangshigang District was arrested at her home on August 5, 2021. Police officers ransacked her home and confiscated all her Falun Gong books and photos of the founder of Falun Gong. It was reported that the officers coaxed her into opening the door on the grounds of a health check during the epidemic.

Ms. Zhang is being held in the Huangshi City No. 1 Detention Center in Xialu District.

Officer Yang Peng from the Nanyanghu Police Station, Yuhong District, called the daughter of 63-year-old Mr. Wang Hongshu on August 9, 2021. He told her to tell her father to go to the police station the following day for questioning. Mr. Wang has been out on bail for one year.

On August 10, Mr. Wang went to the police station with his wife and son-in-law. Officer Yang interrogated him and made a transcript. Yang asked, “Did you travel outside of Shenyang City during this time? Did you have contact with anyone? Where did the paper currency with Falun Gong information printed on it come from? Who are your contacts?” Yang said, “Since you have difficulty sitting and standing, the city and district police departments can’t videotape while questioning and making a full transcript. You have to stay at home, keep the phone line open, and show up whenever you’re called. Your bail period ends on August 26, but your case has already been submitted to the city police department for evaluation, after which it will be brought to the court for processing.”

Two police officers from Zhuolu County went to Mr. Zhang Haibin’s home at 8 p.m. on August 11, 2021. They asked him if he still practiced Falun Gong. They also registered the names and telephone numbers of Mr. Zhang and his wife.

Ms. Hu Fengying and Ms. Li Guanghui were intercepted by two police officers while distributing Falun Gong materials on the afternoon of July 22, 2021. They were forcibly pushed into the 110 Response Unit vehicle and taken to the Renmin Road Police Station.

That night, the officers searched both practitioners. They collected blood samples from them. Both practitioners were given nucleic acid tests and CT scans. On July 23, they were taken to the Chenzhou City Detention Center for five days of detention.

After the practitioners arrived at the detention center, staff members there were to take photos of them and tell them to hold a sign with their names in front of them. Neither practitioner cooperated with them. The officers twisted Ms. Hu’s arms behind her back and handcuffed her. Two officers wrote her name on a sign and placed it in front of her to take pictures. Both practitioners were released five days later.

Ms. Wang Kairong and Ms. Feng Qingxiu were reported to the police for talking to people about Falun Gong in Gaoping Town on the morning of August 7, 2021. They were arrested by plainclothes officers. Ms. Feng was taken home by officers. Ms. Wang was taken to Guanghan City. It was reported that Ms. Wang did not return home. Her current situation is not clear.

Ms. Dong Yi from Minhe County, Qinghai Province, went to visit her daughter in Jiaxing City, Zhejiang Province. She and her daughter were arrested by officers from the Jiefang Police Station in Nanhu District, Jiaxing City, at 3:20 p.m. on May 21, 2021.

Before arresting them, the officers broke into their homes and ransacked the place. The officers took them home, where they collected all their biological information, including fingerprints, blood and hair samples, and retinal scans. The officers then took them to the police station for interrogation.

According to the local police station, the Minhe County Domestic Security Division of Qinghai Province asked Jiaxing City to get involved. The officers installed cameras two weeks before they arrested Ms. Dong and her daughter. They were held at the police station for 24 hours and then transferred to the detention center.

So far, Ms. Dong has been held in custody for two months. Her daughter was released a few days ago but lost her job while she was detained.

The Nanhu District Procuratorate notified Ms. Dong’s daughter that these few days were the investigation period, after which her case would be brought to court.

Ms. Dong is now being abused in the detention center. She has developed ulcers on her buttocks and legs, and she cannot walk.

Ms. Hu Lifeng, in her 70s, was arrested by officers from the Zongguan Police Station, Qiaokou District, on August 8, 2021, for talking to people about Falun Gong. It is not clear where she is being held.

Ms. Deng Xiuqin was arrested and taken to the Etouwan Brainwashing Center on June 8, 2021, by officers from the Zongguan Police Station and people from the Yimei Community Management Office in Zongguan Sub-district, Qiaokou District. Her home was ransacked.