(Minghui.org) Young adults from Students for Falun Gong (SFFG) attended the 2021 International Religious Freedom (IRF) Summit from July 13-15, 2021 in Washington, DC. Students for Falun Gong is a group of young people who practice Falun Gong, a spiritual meditation practice of the Buddhist tradition that teaches the principles of Truthfulness, Compassion, and Forbearance. SFFG members consist of students and young professionals who raise awareness of the persecution of Falun Gong on their college campuses or in their everyday lives.

The group of young practitioners who attended the IRF Summit come from diverse ethnic and educational backgrounds. Their ages ranged from 20 through 29, with members traveling across North America, representing Mexico and Romania, and the U.S. States of Georgia, Michigan, North Carolina, New York, Ohio, Texas, Florida, Maryland and Virginia. Some are college students, while others are young professionals in the healthcare, software development, and education sectors. 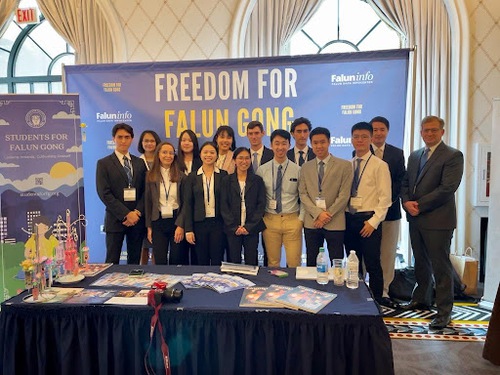 Although the inaugural convening of the IRF Roundtable has a history of 8 years, the summit was held for the first time on a public scale. This 2021 summit was chaired by the former Ambassador-at-large for International Religious Freedom Sam Brownback and the President of the Lantos Foundation for Human Rights & Justice Katrina Lantos Swett. Students for Falun Gong (SFFG) attended the event and clarified the truth about the persecution of Falun Gong through a variety of avenues.

During the IRF plenary sessions, Executive Director of the White House Office of Faith-Based and Neighborhood Partnerships Melissa Rogers and Honorary House Co-Chair of the New Jersey 4th District Congressman Chris Smith mentioned the persecution of Falun Gong in their speeches.

Executive Director Melissa Rogers said, “In recent months, the State Department has advocated for the rights of countless individuals in China, who have been subject to a widespread crackdown by the authorities against religious and ethnic minorities including Tibetans, Falun Gong adherents, Christians, and Uyghur Muslims.” 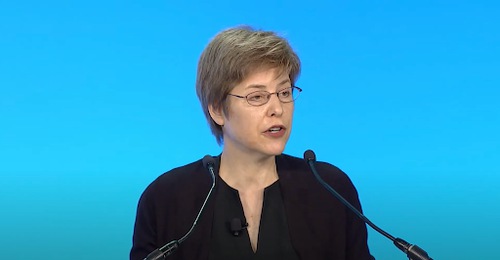 Executive Director of the White House Office of Faith-Based and Neighborhood Partnerships Melissa Rogers speaking at the IRF plenary session on July 14, 2021. 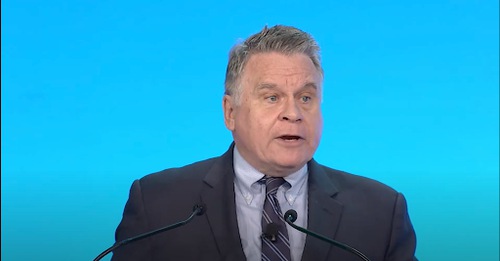 Congressman Chris Smith called out China as an “egregious violator of religious freedom” and a Country of Particular Concern that continues to persecute religious groups.

Solidarity Across the Summit

Even outside the main exhibit hall and plenary sessions, networking opportunities were still incredibly abundant and provided opportunities for the SFFG team to talk about Falun Gong and the persecution in a variety of situations.

Nick, a young practitioner from Ohio, clarified the truth to a gentleman in the hotel cafeteria. While the practitioner was waiting in line for coffee, a man walked up to stand in line behind him, and they struck up a conversation about football. One topic led to the next, and the pair eventually got to the topic of why they came to the IRF summit. For Nick, the persecution of Falun Gong in mainland China lies in stark contrast to the religious freedom that he exercises daily in America. Touched by his genuine and sincere wish for the Chinese regime to stop the persecution, the man firmly condemned the CCP.

On the last day of the summit, there was a question and answer panel with Ambassador Brownback and Katrina Lantos Swett. A young practitioner from Texas explained that she had written her senior thesis on how 97% of U.S. and European pharmaceutical companies were supplying medical equipment and immunosuppressants that supported forced organ harvesting in China. She asked the panelists how she could enact changes in policy with this new finding.

Ambassador Brownback commented, “Fabulous idea. I've never heard of it before. It makes all the sense in the world. The problem now is just to get it in front of people that can do something with it.” Brownback suggested the practitioner to “get in front of these groups,” such as government officials, human rights organizations like the Lantos Foundation, and security think tanks, and present the topic to them.

Lantos Swett congratulated the practitioner for doing her thesis on this important subject and then commented on forced organ harvesting in China.

“It’s really difficult to imagine a more repugnant violation of human rights than this forced organ harvesting,” Lantos Swett said. “It’s unbelievable and ghoulish. And there is no doubt that it is happening. There is no doubt that the Falun Gong practitioners are the primary target of this crime against humanity, so it’s horrific.”

Lantos Swett further commented on China. “I think we just need to call out China. We need to say that we know you are doing this. This is appalling.”

Students for Falun Gong was among the 46 booths in the exhibit hall. People of many different ages and professions visited the booth. The young practitioners talked about the persecution of Falun Gong to religious leaders, embassy members, elected representatives, entrepreneurs, media spokespeople and the press, young interns in international studies, and more. Most people who stopped by the booth were already familiar with Falun Gong and the persecution in China by the Chinese Communist Party. People who had not known about the spiritual practice of Falun Gong and the persecution were shocked to hear about the torture and organ harvesting performed on practitioners in China. 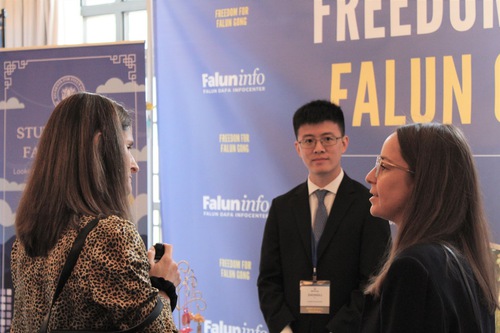 A Romanian practitioner discusses ways to combat the persecution in China through judicial and legal means with a professional lawyer.

Everyone who stopped by the booth was very supportive of Falun Gong. They expressed support, solidarity, and prayers for the Falun Gong practitioners in China. Some took pictures of the banner that said “Freedom for Falun Gong” and many expressed profound gratitude towards the team members for being young voices for Falun Gong in America. 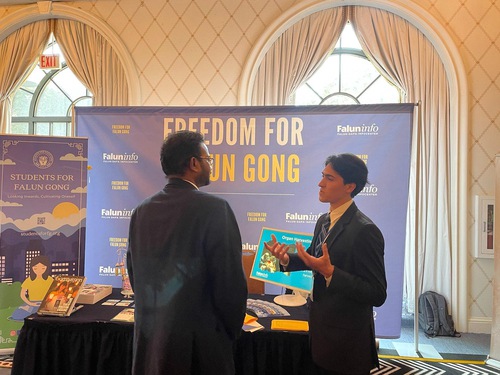 Published author inquires how he can help raise awareness about the persecution. 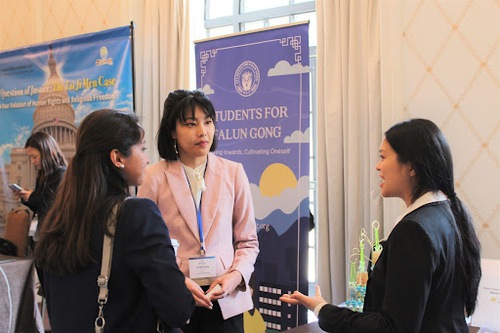 Students for Falun Gong members talk with an intern from the Heritage Foundation.

A Teenager Moved by Falun Gong

Moved by what is happening in China and the practitioners’ efforts to raise awareness of the persecution, Isaac decided to also take part the 22nd anniversary event in Washington, D.C. to end the persecution of Falun Gong. Despite the hot weather, Isaac stayed for the entirety of the rally and even marched alongside practitioners. Before leaving, the young man stayed after to chat with the practitioners he'd met at the IRF Summit. 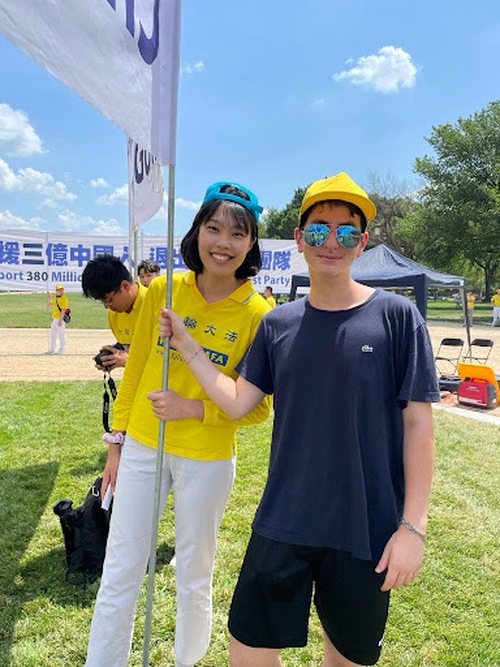 Isaac with a young practitioner from Students for Falun Gong holding a banner at the rally on July 16, 2021.

Students for Falun Gong was one of the youth-led organizations that represented the Youth Leaders Track of the IRF Summit. On Day Three of the summit, SFFG hosted an 80-minute presentation detailing the essence of Falun Gong, the persecution of Falun Gong adherents, and the past 22 years of peaceful resistance. About two dozen people fully engaged with the speakers and the presentation.

Many audience members showed concern about the persecution and especially the CCP's forced organ harvesting of prisoners of conscience. One audience member commented that the organ harvesting was horrendous. Another audience member commented that it is unethical for Americans to pay for such organ transplants. He offered a pragmatic legislative plan to help stop organ harvesting in China. “The action we can take now is we can inform the US Department of State,” he said. “Anyone getting a visa to go to China, should state what their purpose is for going. If they state an unethical reason or other reasons, they should be denied a visa to go to China. We can do that with the UK, Canada, and other countries. Maybe that is the action plan you want to take.” 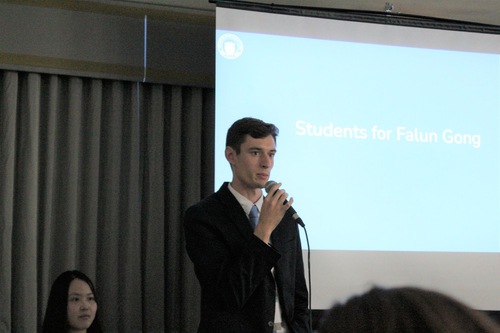 A young practitioner from Ohio talks at the 2021 IRC Summit about the non-profit organization Students for Falun Gong and the 22 years of peaceful resistance by Falun Gong practitioners in the face of the Chinese regime's persecution.