Why Didn’t These People in “Close Contact” with Covid-19 Sufferers Get Infected?

(Minghui.org) As the Covid-19 pandemic continues to ravage the world, no one wants to be in “close contact” with anyone who has the virus. Whenever a new case is reported, family members and coworkers of the infected are among the first to be quarantined.

Many questions remain unanswered regarding close contact. For example, the Chinese Communist Party (CCP) claimed that “patient zero” in Nanjing City was a ground crew member who went inside to clean the airplane from Russia to Nanjing. But the authorities cannot explain why none of the passengers got infected during the nine-hour flight from Russia to Nanjing, but this cleaner was infected after spending only 30 minutes cleaning the aircraft and subsequently caused a city-wide spread of the virus?

In this article, we will highlight some examples of people exposed to Covid-19 patients who remained perfectly healthy. This indicates that the virus may spread in a way that modern science cannot explain and that there may be better solutions than vaccines, especially given how rapidly the virus is mutating.

One Roommate Is Infected, the Other Isn’t

Ms. Liang Qiongyu in Taiwan practices Falun Gong, a meditation system also known as Falun Dafa that is based on the principles of Truthfulness, Compassion, and Forbearance. During the pandemic, her husband worked in another country where there were many new cases every day.

Worried about his safety and having witnessed the miraculous healing power of Falun Gong on many people, Ms. Liang called her husband every day and reminded him to keep in mind “Falun Dafa is good, Truthfulness-Compassion-Forbearance is good.” But her husband was an atheist and dismissed her advice.

Ms. Liang’s grandmother also told him to do the same. Not wanting to disobey an elder, he followed her advice to recite the above-mentioned phrases on the phone. 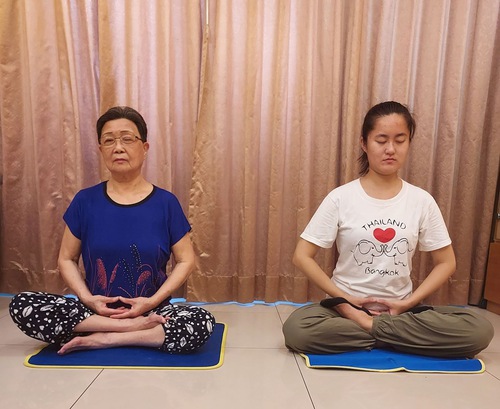 At that time, Ms. Liang’s husband’s roommate and coworker was coughing a lot and sometimes was almost out of breath. This went on for nearly one month.

One day while he was talking to Ms. Liang on the phone, his company notified him not to return to the dorm.

“What happened? Am I infected?” he wondered.

Ms. Liang assured him not to worry. “Please keep reciting ‘Falun Dafa is good, Truthfulness-Compassion-Forbearance is good’ and you will be just fine,” she said.

To her surprise, he agreed without hesitation. Maybe he was too worried about being infected by his roommate.

Later that day, his company notified him that his roommate had indeed been infected. He and his roommate were together almost 24 hours a day, lived in the same dorm, and worked together. The two shared the same air conditioning system and the same bathroom and often ate together.

Ms. Liang’s husband then moved out and was under quarantine. Both he and his roommate were tested every three weeks. He was always negative, while his roommate didn’t test negative until the fourth time.

Ms. Liang’s husband was very thankful for Falun Gong. After returning to Taiwan, he signed up for a 9-day session and watched the video lectures of Mr. Li Hongzhi, founder of Falun Gong, and began to read the Dafa books, including Zhuan Falun.

Another Falun Gong practitioner lives in Wuhan, Hubei Province, once the epicenter of the pandemic. Her daughter and son-in-law are both nurses at a major hospital in Wuhan. Her son-in-law works in the emergency room. At the height of the pandemic, the young couple interacted with a large number of Covid patients every day, and some of their coworkers became infected. They too were under a lot of stress.

A week before the Chinese New Year, the practitioner invited her daughter and son-in-law for dinner on January 18, 2020. Seeing how stressed out her son-in-law was, the practitioner reminded him and his wife again to recite “Falun Dafa is good, Truthfulness-Compassion-Forbearance is good.” She also talked about Falun Gong more in-depth and debunked the CCP’s slanderous propaganda. The couple were very interested.

Because the couple had quit the CCP organizations long ago and remembered to recite “Falun Dafa is good, Truthfulness-Compassion-Forbearance is good,” they remained safe throughout the pandemic despite their close contact with Covid patients in the hospital.

The practitioner’s other daughter, a doctor at another hospital in Wuhan, had a similar experience. She was assigned to work in the fever clinic for a month and interacted with patients every day, including those already infected with the virus. Like her younger sister, she also heeded her mother’s advice and was fine.

One practitioner in Wuhan said few people paid attention to the disease when it first broke out in late 2019 due to the CCP’s cover-up. Plus, the Chinese New Year was approaching, so many people were visiting each other and having parties. The practitioner’s father, in particular, attended parties almost every day, sometimes mingling with dozens and even hundreds of people. He did this until the city’s lockdown on January 23, 2020.

After reading similar reports on social media (WeChat) every day, the practitioner’s father grew very worried. Although not a Falun Gong practitioner, he nonetheless supported Falun Gong and had already quit the CCP organizations. Both he and his family considered it nearly a miracle that he survived all those parties.

A Large Family of Over 30 People Spared

Similar situations also happened in the countryside. One example was described in the Minghui article “Why Did the Wuhan Coronavirus Spare Most of My Family?” The author said there were over 30 in her extended family in the village. More than 20 of them gathered for a New Year’s Eve dinner on January 24, 2020, one day after the Wuhan lockdown.

The next day, the author’s cousin Tao had a fever and kept coughing. Two days later he was diagnosed with the coronavirus. “Other than my cousin Tao, everyone in the family supports Falun Gong and has quit the CCP organizations,” wrote the author. But Tao was different. Deceived by the defamatory propaganda, he once attacked Falun Gong in public.

When the author talked with Tao again this time, Tao took it seriously. He asked about Falun Gong. The author explained that practitioners want to be better people following the principles of Truthfulness-Compassion-Forbearance, but the CCP, which is infamous for its lies and brutality, has been persecuting Falun Gong. That is why quitting the CCP and its organizations will align one with traditional values and one will be blessed. Tao agreed and recited “Falun Dafa is good, Truthfulness-Compassion-Forbearance is good.” His fever was gone that evening. He recovered soon afterward and left the hospital.

Tao’s wife Ting believed in Falun Gong and often read Dafa books. Occasionally, she listened to Minghui Radio and did the Falun Gong exercises. After Tao was infected this time, she helped him eat and bathe. Although in close contact with him, she was fine. Other family members, including Tao’s son, grandson, and others who were at the New Year’s Eve dinner, were all fine.

“Our neighbors asked, ‘How come the disease is not infectious in your family?’” The author wrote, “We know that when we follow our conscience and support the innocent, we will be blessed.”

“The Disease Has Eyes”

Another example is from Hubei Province. In the article “The Magic Phrases That Helped My Relatives Recover from Coronavirus Infection” that was published on Minghui, the author said her nephew’s wife and aunt’s son were infected with the coronavirus. After reciting “Falun Dafa is good, Truthfulness-Compassion-Forbearance is good,” both of them recovered. But her uncle was not so lucky.

In fact, right before the 2020 Chinese New Year, the uncle brought home a picture of 10 CCP marshals and hung it up. Since many people do know how awful the CCP is and have quit its organizations, his wife (the author’s aunt) asked him to take the photo down and throw it away. But he wouldn’t. The next day, the uncle’s young son was diagnosed with the virus. When the aunt talked about quitting the CCP organizations again, her husband still did not listen. He later caught the disease and died in just a few days.

Village officials asked the aunt to quarantine elsewhere, but she asked to quarantine at home. Disinfection workers did not dare to come in and asked her to disinfect her home herself and take out the trash. She kept reciting the two phrases mentioned above and a checkup later on showed she was fine.

Village officials were curious about this. Some villagers said they believe the disease has eyes and knows where it will spread.

The Interplay of Mind and Body

Although modern science has not studied the connection between mind and body until recent years, such a connection was well known in ancient times, especially in China. More specifically, people in general believed that “good is rewarded with good and evil incurs evil.”

That is why over 380 million Chinese have already quit the CCP. They have recognized the harm the regime has done to its own people during all its political campaigns, including the land reform in the 1950s, the Great Chinese Famine (1959-1961), the Cultural Revolution, the Tiananmen Square Massacre in 1989, and others. In 1999, the CCP began to persecute millions of Falun Gong practitioners. That campaign of persecution remains unabated after 22 years. Many practitioners have been detained, tortured, and imprisoned. Some were sent to forced labor camps, subjected to psychiatric abuse, and even became victims of forced organ harvesting.

One report on Minghui last year studied 36 incidents of infection published on Minghui between January and May 2020. Representing six ethnic groups and six countries, 100% of these people experienced improvement by reciting “Falun Dafa is good, Truthfulness-Compassion-Forbearance is good.” Among those who were 11, 10 were cured and one improved.

In Huangdi Neijing (The Yellow Emperor’s Internal Classic), one of the best-known ancient Chinese medical texts, it says, “When a person has righteous qi (energy) residing inside, no viciousness is able to invade.” With the CCP as the biggest threat to the world and Falun Gong practitioners as the single largest group suppressed by the regime for their faith, anyone who supports innocent Falun Gong practitioners will be blessed. 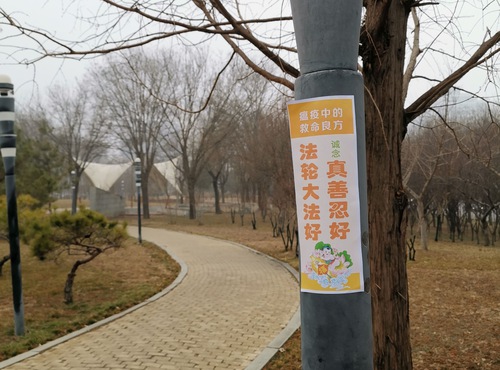 Falun Gong has been suppressed by the CCP since July 1999. Here is a poster with the words of “Falun Dafa is good, Truthfulness-Compassion-Forbearance is good.” For putting up a poster like this, one could end up in detention and be incarcerated for years. 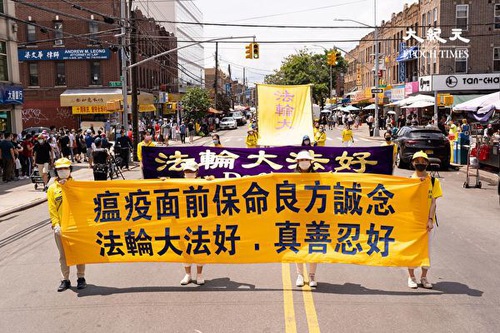