(Minghui.org) Falun Gong practitioners held a rally and march to condemn the Chinese Communist Party’s (CCP) 22-year-long persecution which began on July 20, 1999. As the years passed, an increasing number of people have learned about Falun Gong and how the CCP targets the spiritual practice for persecution.

Thirty-five elected officials in Canada signed a letter to Prime Minister Trudeau and called on him to help stop the CCP’s persecution. Seventeen Members of Congress in the U.S. issued statements or letters to support Falun Gong. Among them are House Representative Juan Vargas and Zoe Lofgren from California.

Representative Juan Vargas: I Stand with You in Solidarity Condemning China’s 22-Year Oppression 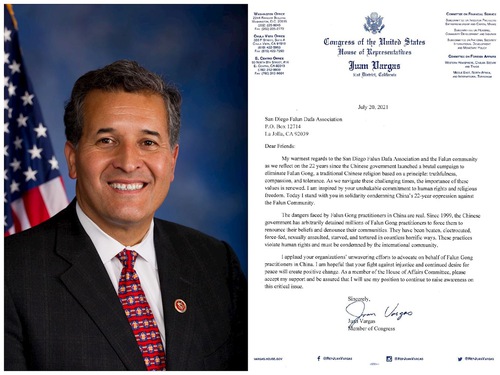 Representative Juan Vargas sent a letter to condemn the persecution.

Representative Juan Vargas stated in his letter, “...we reflect on the 22 years since the Chinese government launched a brutal campaign to eliminate Falun Gong, a traditional Chinese religion based on a principle: truthfulness, compassion, and tolerance. As we navigate these challenging times, the importance of these values is renewed. I am inspired by your unshakable commitment to human rights and religious freedom. Today I stand with you in solidarity condemning China’s 22-year oppression against the Falun Gong community.

“The dangers faced by Falun Gong practitioners in China are real. Since 1999, the Chinese government has arbitrarily detained millions of Falun Gong practitioners to force them to renounce their beliefs and denounce their communities. These have been electrocuted, force-fed, sexually assaulted, starved, and tortured in countless horrific ways. These practices violate human rights and must be condemned by the international community.

“I applaud your organization’s unwavering efforts to advocate on behalf of Falun Gong practitioners in China.”

Representative Zoe Lofgren: More Pressure Must Be Put on the Chinese Government 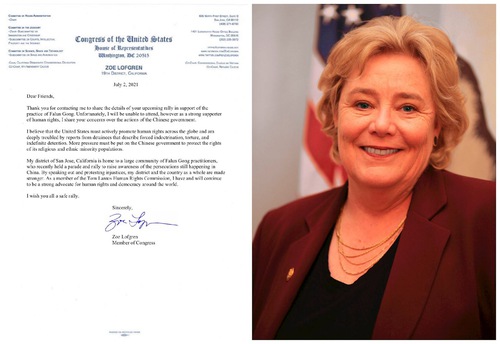 Representative Zoe Lofgren and her letter

Representative Zoe Lofgren stated in her letter, “I share your concerns over the actions of the Chinese government.

“I believe that the United States must actively promote human rights across the globe and am deeply troubled by reports from detainees that describe forced indoctrination, torture, and indefinite detention. More pressure must be put on the Chinese government to protect the rights of its religious and ethnic minority populations.”

“My district of San Jose, California is home to a large community of Falun Gong practitioners, who recently held a parade and rally to raise awareness of the persecution still happening in China. By speaking out and protesting injustices, my district and the country as a whole are made stronger.” 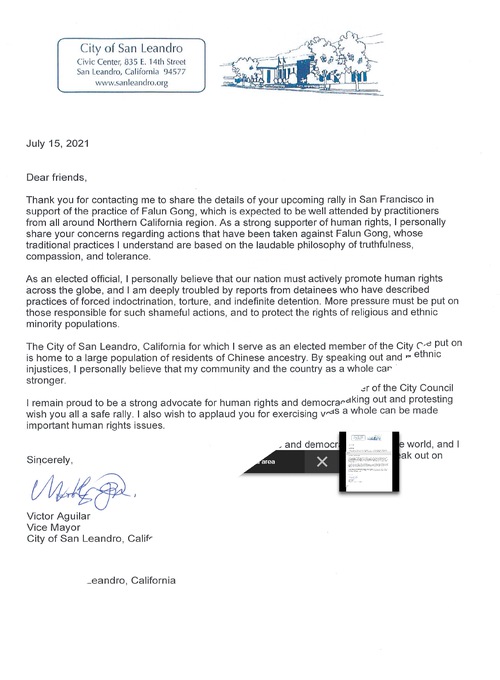 Vice Mayor Victor Aguilar of San Leandro stated in his letter, “As a strong supporter for human rights, I personally share your concerns regarding actions that have been taken against Falun Gong, whose traditional practices I understand are based on the laudable philosophy of truthfulness, compassion, and tolerance.

“As an elected official, I personally believe that our nation must actively promote human rights across the globe, and I am deeply troubled by reports from detainees who have described practices of forced indoctrination, torture, and indefinite detention. More pressure must be put on those responsible for such shameful actions, and to protest the rights of religious and ethnic minority populations.”

Representatives of several groups came and spoke during the rally of Falun Gong practitioners in Los Angeles to condemn the 22-year-long persecution. They praised practitioners’ perseverence and condemned the CCP’s brutality.

A Certificate of Recognition from Assembly Member Richard Bloom for World Falun Dafa Day was received before the event against the CCP’s 22-year-long persecution. 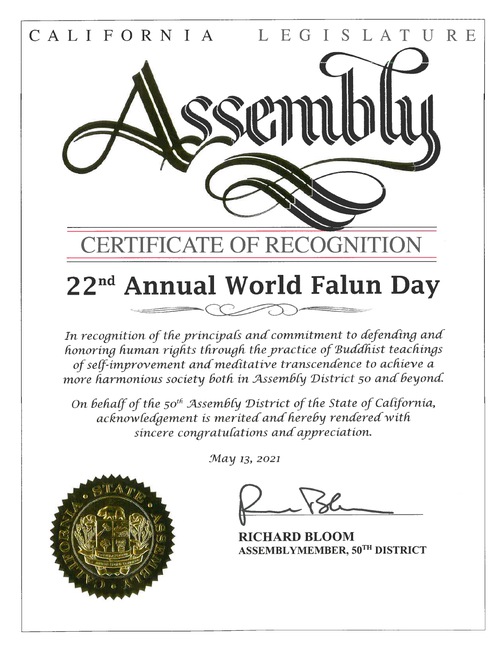 Assembly Member Richard Bloom of the 50th district issued a Certificate of Recognition for World Falun Dafa Day, May 13.

The certificate reads, “On behalf of the 50th Assembly District of the State of California, acknowledgment is merited and hereby rendered with sincere congratulations and appreciation.”

May 13 this year is the 22nd World Falun Dafa Day. About thirty elected officials in California, including Members of Congress, state Assembly members, county and city officials from the greater Los Angeles area of Southern California sent congratulatory letters, praising Falun Dafa’s principles of truthfulness, compassion, and tolerance, and thanking Falun Gong practitioners for their contributions to the community over the years.