(Minghui.org) Glenn Johnson, Mayor of the City of Pullman, Washington, proclaimed Tuesday, July 20, 2021, as a day for honoring Falun Dafa and Truthfulness-Compassion-Forbearance in the city. 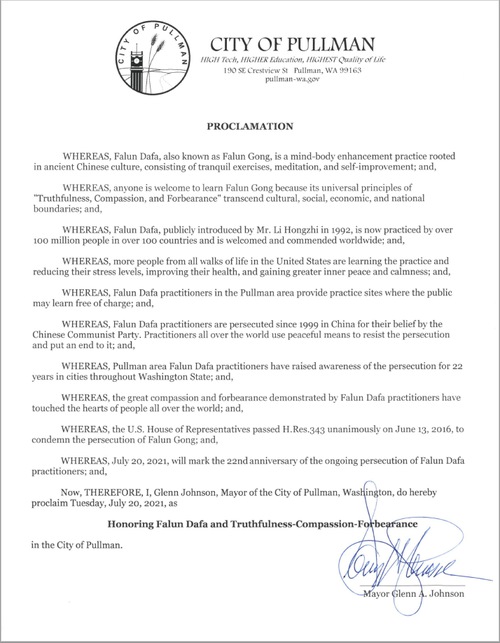 Proclamation from Mayor Glenn Johnson of the City of Pullman, Washington

Following is the text of the proclamation:

WHEREAS, Falun Dafa, also known as Falun Gong, is a mind-body enhancement practice rooted in ancient Chinese culture, consisting of tranquil exercises, meditation, and self-improvement; and,

WHEREAS, anyone is welcome to learn Falun Gong because its universal principles of “Truthfulness, Compassion, and Forbearance” transcend cultural, social, economic, and national boundaries; and,

WHEREAS, Falun Dafa, publicly introduced by Mr. Li Hongzhi in 1992, is now practiced by over 100 million people in over 100 countries and is welcomed and commended worldwide; and,

WHEREAS, more people from all walks of life in the United States are learning the practice and reducing their stress levels, improving their health, and gaining greater inner peace and calmness; and,

WHEREAS, Falun Dafa practitioners in the Pullman area provide practice sites where the public may learn free of charge; and,

WHEREAS, Falun Dafa practitioners are persecuted since 1999 in China for their belief by the Chinese Communist Party. Practitioners all over the world use peaceful means to resist the persecution and put an end to it; and,

WHEREAS, Pullman area Falun Dafa practitioners have raised awareness of the persecution for 22 years in cities throughout Washington State; and,

WHEREAS, the great compassion and forbearance demonstrated by Falun Dafa practitioners have touched the hearts of people all over the world; and,

WHEREAS, the U.S. House of Representatives passed H.Res.343 unanimously on June 13, 2016, to condemn the persecution of Falun Gong; and,

WHEREAS, July 20, 2021, will mark the 22nd anniversary of the ongoing persecution of Falun Dafa practitioners; and,