(Minghui.org) Falun Dafa practitioners in Montreal held a march on July 17, 2021, to let people know about the Chinese Communist Party’s (CCP) 22-year-long persecution. They also called on people to help stop the persecution. Many passersby said this persecution of a peaceful group is unacceptable and must stop. 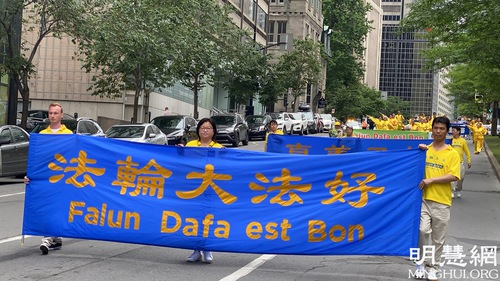 Practitioners marched in Montreal on July 17 to protest the CCP’s 22-year-long persecution.

The first section of the procession, “Falun Dafa Is Great,” featured practitioners demonstrating the exercises and displaying banners. The next section focused on the CCP’s persecution and called for the disintegration of the Party and for the persecution to end. It was followed by practitioners dressed in white, a symbol of mourning, carrying portraits of fellow practitioners tortured to death by the CCP. The last section urged onlookers to “Quit the CCP Organizations for a Safe Future.” The march followed St. Catherine Street, a bustling commercial street in downtown Montreal, and ended in Chinatown, three kilometers away. 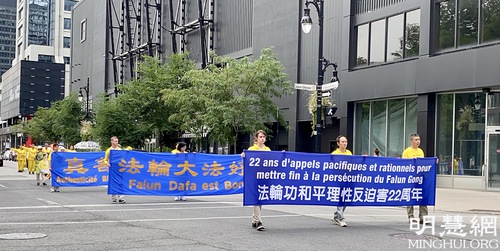 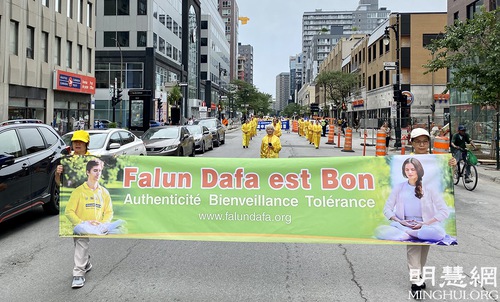 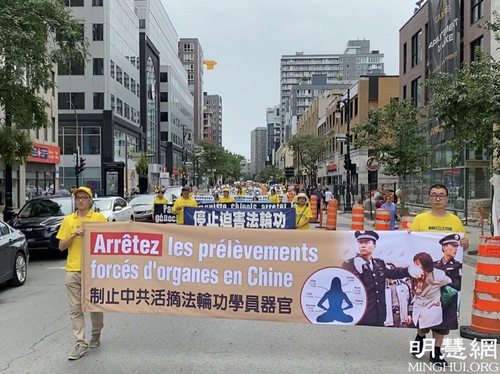 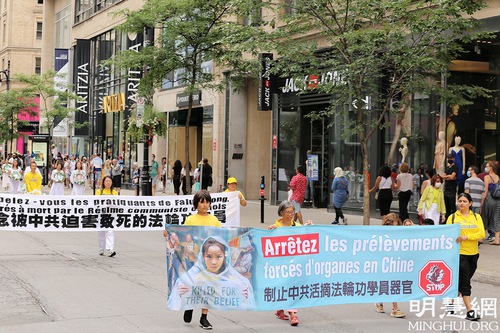 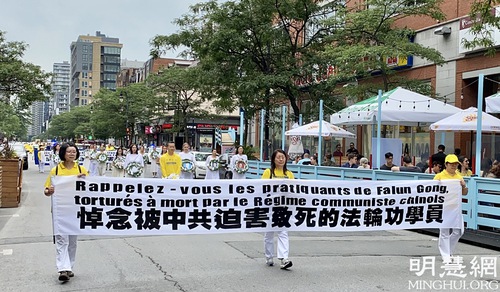 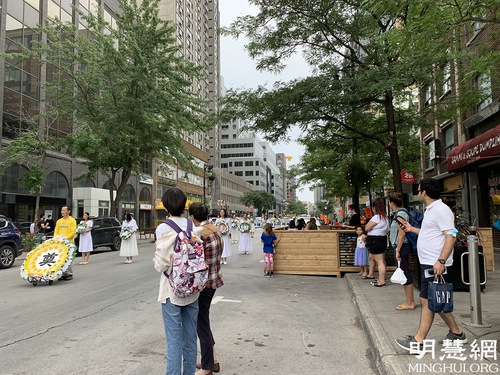 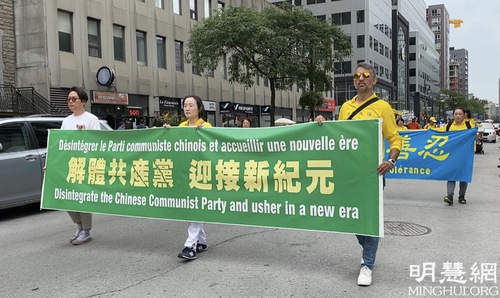 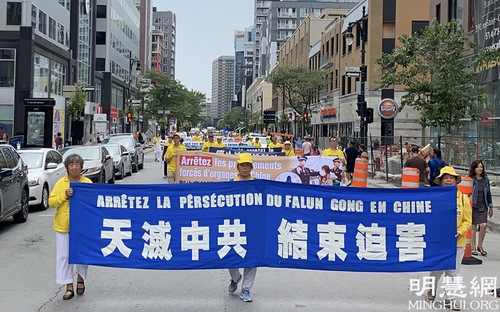 March in downtown Montreal on July 17 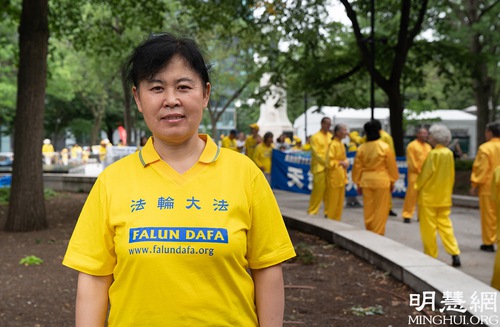 Zhifang Wang from Shanxi Province, China, read the book Falun Gong when she was 30 in 1994. The main book of Falun Dafa's teachings, Zhuan Falun, says that “Zhen-Shan-Ren is the sole criteria to discern good and bad people.” (Lecture One, Zhuan Falun).

Only then did she fully understand what it means to be a really good person. She said, “Falun Dafa guides people to follow the principles of Truthfulness-Compassion-Forbearance and return to one's original true self. This is what I was looking for. I knew I had found the meaning of life.”

After the persecution began in 1999, Wang and her practitioner husband suffered long-term persecution. The police ransacked their home many times, usually at night. The couple was illegally arrested twice. They and their child were traumatized. To avoid further persecution, Wang’s family immigrated to Montreal in 2014.

Over the past 22 years, practitioners she knew in China were tortured and some died. She said that Falun Dafa practitioners have endured tremendous suffering but persevere. She said that practitioners peacefully protest the persecution “not just for ourselves, but for those people who don’t know the truth, because they are misled by the CCP. I sincerely hope that the people who persecute us will quickly recognize the CCP for what it is and not let it control them.” 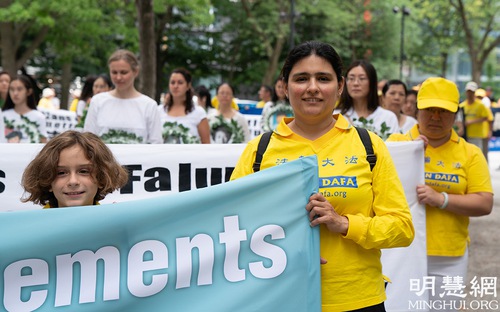 Yareli, her husband, and their two children participated in the march. She said that Dafa gave her wisdom and happiness.

Yareli started to practice Falun Dafa in her hometown of Acapulco, Mexico, in 2006. When she learned that practitioners were being brutally persecuted in China, she thought that something had to be done to stop it, that she could not ignore such evil.

At that time, there were no other Falun Dafa practitioners near her, so she made a big banner that read, “Stop the Persecution of Falun Gong.” She displayed it on a crowded beach, hoping to raise awareness of the persecution. After moving to Montreal in 2008, she joined the Tian Guo Marching Band and participates in parades to let more people know how wonderful Falun Dafa is.

“Today we came here to participate in the march to tell people that Falun Dafa is good and that it is being persecuted in China. We will not stop raising awareness until the persecution ends.”

Ms. Wang, an immigrant from China, said that she was very excited to see the Falun Dafa march and that she supported practitioners in protesting the persecution.

Her daughter pointed to the police vehicle near them and said that, in Canada, the police protected the practitioners.

Wang said, “The Communist Party has ruled China for so many years, suppressing and killing its own people.” To persecute Falun Dafa, the CCP fabricated many lies to mislead the public. She “absolutely supports” the practitioners’ efforts to protest and call for an end to the persecution 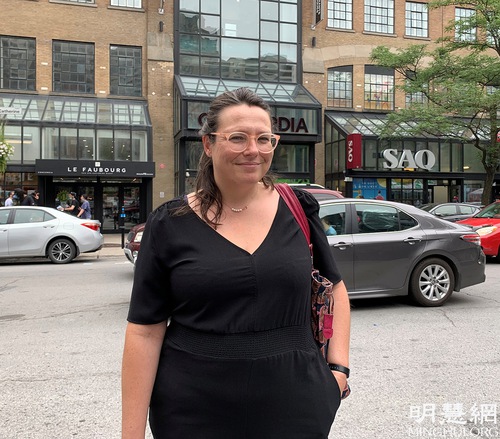 Ramade is an art historian and a lecturer at the University of Montreal. She and her family watched the march. She said, “I know that Uyghurs are locked up in concentration camps, but I didn't know the situation of Falun Dafa, so we talked to practitioners to learn more.

“I know the Chinese (CCP) government persecutes people, including ethnic minorities, faith groups, and cultural elites. The violence and the level of persecution are shocking,” she continued.

“What impressed me was the tranquility of the march: no noise, no shouting. And they were very solemn, which was very moving. This silence is powerful.”

She said that the persecution must stop. “We fully support the practitioners. All persecutions, especially the persecution by a government against faith and cultural groups, are devastating to the people and disastrous.”

Montreal Residents: We Wish to Help Practitioners End the Persecution 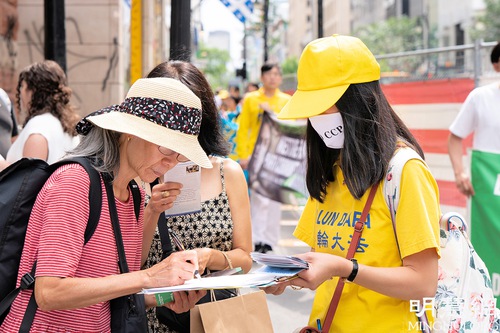 Several spectators signed the petition to end the persecution.

During the march, spectators signed the petition to condemn the persecution. 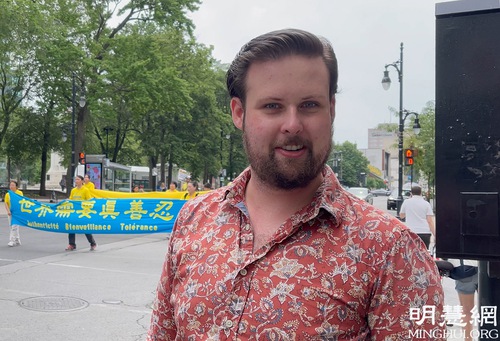 Mr. Brown was happy to see practitioners calling attention to the persecution.

“I know about Falun Dafa and why they march here. They are a faith group persecuted by the CCP,” said Mr. Brown as he watched the parade. “Events like these are very important. The CCP must know that people have freedom of belief. I wish them good luck and keep up the protesting.” 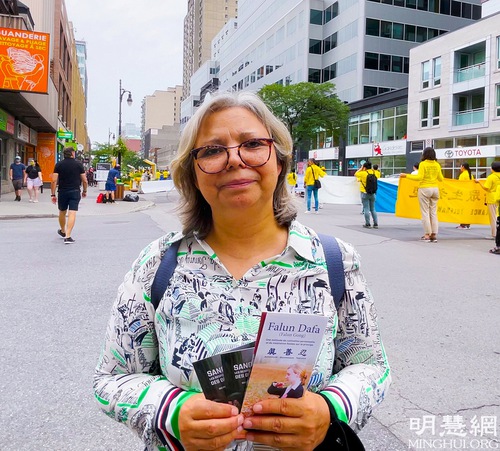