Berlin, Germany: Falun Gong Parade in Berlin Supported by People From All Walks of Life

(Minghui.org) “Everything displayed here made me sad. This is a very serious appeal accusation. They sincerely are asking for help. They touched me. I hope I can help them,” geologist Regine Platz told the reporter.

She watched the Falun Gong practitioners’ parade in Berlin on July 17 from start to finish.

With the purpose of exposing the 22-year long persecution of Falun Gong, the parade was held on the main street in Berlin, Kurfuerstendamm, and passed the famous tourist spot – Kaiser-Wilhelm-Gedaechtniskirche.

The practitioners demonstrated the exercises and displayed the spread of Falun Gong throughout the world during the parade. A group of practitioners held pictures of those who were tortured to death by the persecution. They also exposed the state-sanctioned forced organ harvesting in China and other brutalities of the persecution by the Chinese Communist Party (CCP). Meanwhile, they called upon the public for help to end the persecution. At the end of the entry, practitioners performed the traditional Chinese waist drum dance.

After the parade, practitioners set up a booth at Plaza Wittenbergplatz to inform more people about the persecution. They held another parade in the evening on Schlosstrasse, a business district in Berlin. 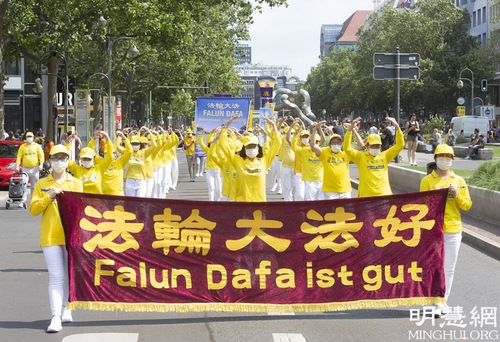 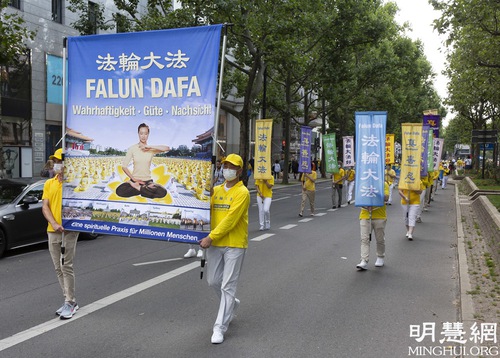 Practitioners demonstrate the exercises in the parade. 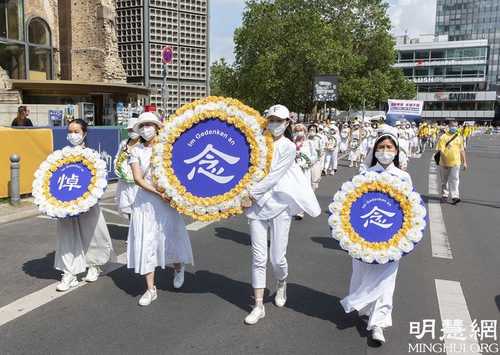 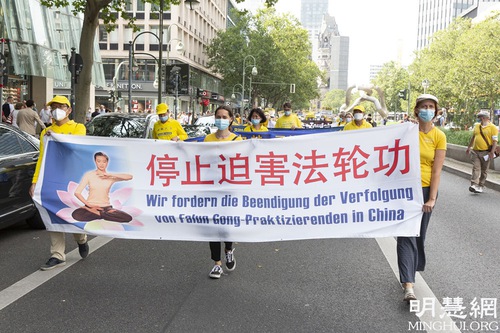 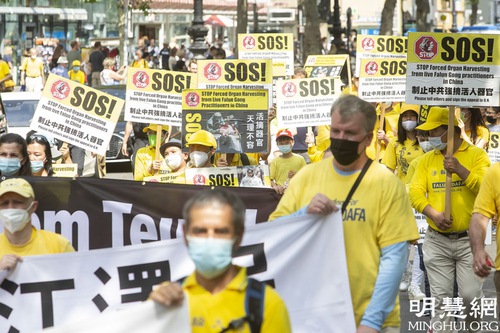 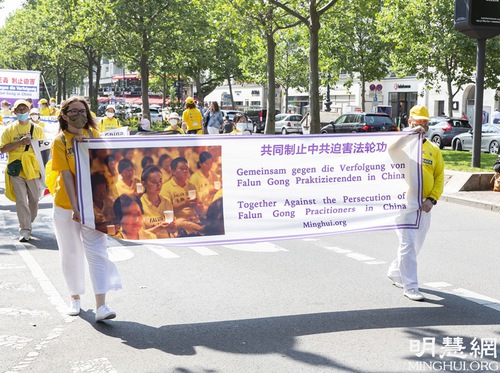 Exposing the persecution and commemorating those who were tortured to death 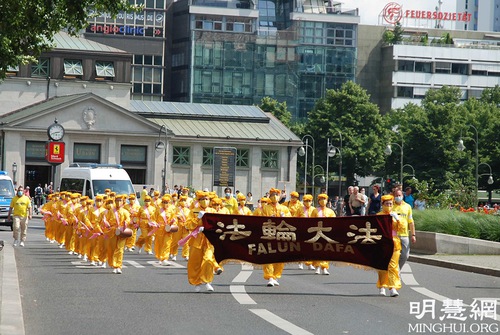 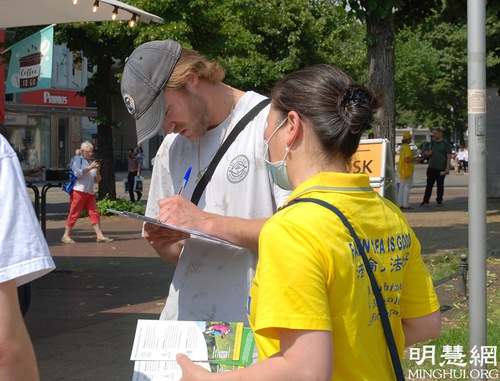 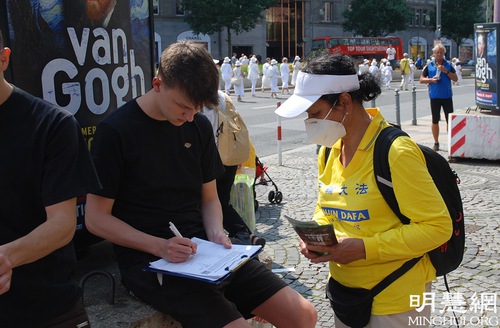 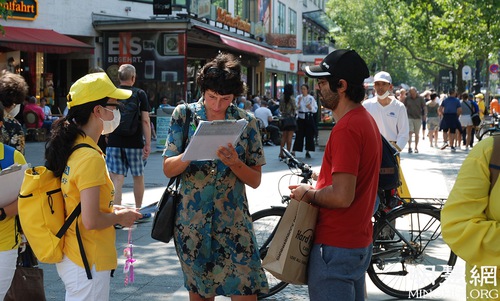 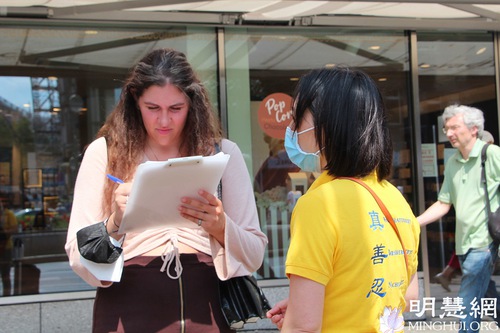 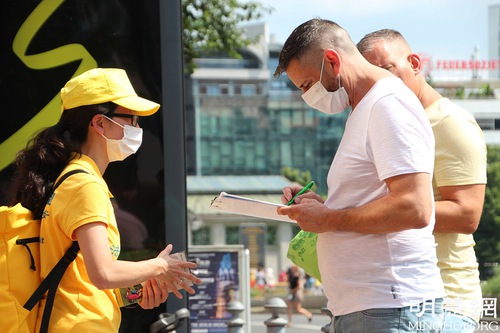 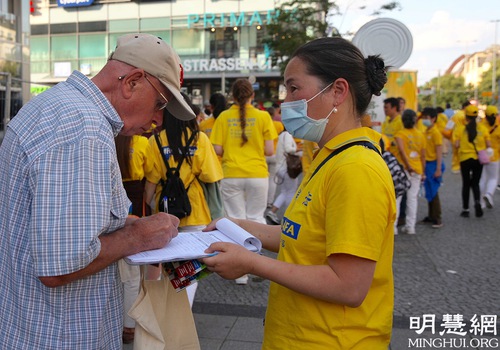 People sign the petition to support Falun Gong and condemn the persecution. 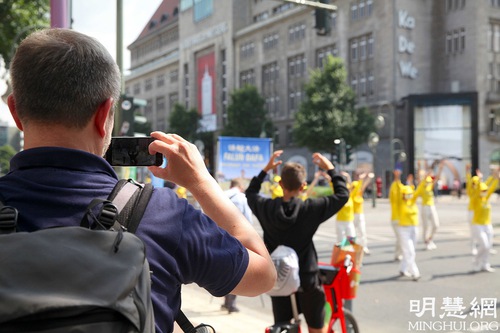 Some people learned the exercises. 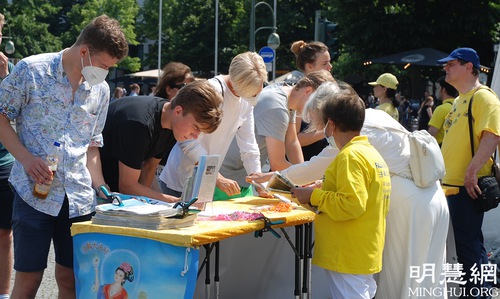 People signed the petition at the practitioners’ booth on Plaza Wittenbergplatz.

“I Feel Their Sadness”

Regine Patz said, “What hurts me is that these people [Falun Gong practitioners] just want to have a healthy body, a good life, and a common philosophy. Yet they are being persecuted by politicians with ulterior motives.”

With tears in her eyes, she was choked-up and said, “Just because they practice Falun Gong, their organs are forcibly harvested for profit. The Chinese Communist Party does such things so casually, as if they can do whatever they want. I can’t imagine such a thing. I feel very sad.”

She continued, “It is inconceivable that such a thing is happening today. People try to call for help when walking on the street, without effective measures from the top. I think it’s cruel.”

She said, wiping away the tears covering her face, “I felt their sadness. It is a very serious sadness, and I saw some hope.” Recognizing the word “Falun” from the parade reminded her of the Falun Gong parade she saw in London five years ago.

“In fact, it is precisely because I saw hope, I am able to bear that kind of sadness. [The parade] gave me inspiration, and I wanted to be in the parade and give my support. I would like to hope that those who support them will join them and extend to the world like a tree root.”

She signed a Falun Gong (aka Falun Dafa) practitioners’ petition and noted practitioners’ suggestion of writing to parliament members, and other ways to help stop the persecution.

She told practitioners that she was recording the parade on her cell phone to remind herself of today’s deep feeling and eagerness to help practitioners stop the persecution, so that she would take real actions.

Car Parade: Bringing the Truth of Falun Gong to the Public

On the same day, 23 cars drove through Berlin’s famous attractions and busy streets topped with display boards that read “Falun Dafa Is Good,” “The World Needs Truthfulness-Compassion-Forbearance,” and so on, to introduce Falun Gong. The writing on the boards also exposed the persecution of Falun Gong and other crimes committed by the CCP and called on people to help stop the persecution.

The car parade lasted about six hours as it proceeded through famous landmarks such as Checkpoint Charlie, Potsdamer Platz, Unter den Linden, and Brandenburg Tor. 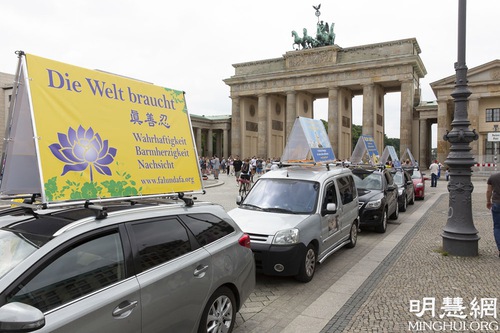 The cars prepare for the parade in front of Brandenburg Tor.

In addition to the large number of passersby, there were diners from various restaurants on the streets through which the car parade drove. The messages on the roofs attracted many people. Many people also signed the petition to support Falun Gong.

Over the past two decades, practitioners have held peaceful parades and anti-persecution campaigns every year, and the police have learned about the peacefulness displayed by Falun Gong practitioners and the bloody persecution by the CCP. Therefore, the Berlin police gladly facilitate the activities by the practitioners. In this event, police drove at the speed that practitioners asked for, giving passersby plenty of time to look at the display boards. The police also blocked the road so that the parade and motorcade could pass without interruption, and passersby could get complete information.

“It was very peaceful, and I noticed that this parade was different from all the other protests, very positive, very peaceful. It made people stop and hope to have a deeper understanding of what is going on. The Falun Gong practitioners sent a good message,” said journalist Louisa M. Lusia Thiele, commenting on the parade.

“As a European I can’t understand being captured and persecuted simply because of my belief, opinions, and ideas. I want to help them. I want the Falun Gong practitioners to be free, and live the way they want without fear of persecution.”

Talking about Falun Gong practitioners following the principles of Truthfulness-Compassion-Forbearance she said, “Everyone can live according to these principles.”

Giovanni Di Natali, who also works for the Staff Management Committee, said, “[The parade] was very well organized.” After signing the petition in support of Falun Gong, he said, “I hope that my signature will help make the world a better place, and everyone can do something about it.”

“The persecution is intolerable.”

Nurse Hilke K. Sylke Beilfuss saw the contents of the banners in the parade. She went online to inquire about what was going on with Falun Gong. She was concerned about what she learned, and she wanted to know how to help stop the persecution.

“More of these [Falun Gong practitioner] activities can get more people to pay attention to human rights or find other solutions,” she added.

“I will help stop the persecution.”

High school student Kevin D. Kraemer and friends stood by the side of the road reading a banner held up by Falun Gong practitioners, and a display board with SOS written on it. They wanted to learn more and read practitioners’ fliers.

“It’s too much for the Chinese Communist Party to take organs from living people. It’s intolerable, so I signed the petition,” Kevin said. This is the first time he heard of Falun Gong, and did not know about the persecution of Falun Gong by the CCP.

Retired high school history teacher Gabby B. Gaby Felder also hoped that his signature would “...help Falun Gong practitioners to gain the freedom to practice in China.” In her opinion, “Falun Gong teaches people to find inner peace, which makes me feel very good. It’s too bad that it cannot be practiced freely in China.”