(Minghui.org) Today's news from China includes incidents of persecution that took place in 23 cities or counties in 12 provinces, where at least 77 practitioners were recently persecuted for their belief. 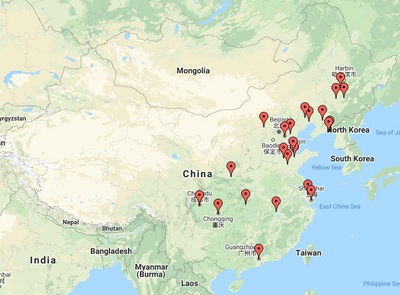 Ms. Yin Lanhua from Liaoyuan City was arrested at home by officers from the Xiangyang District Police Department in Liaoyuan City on July 6, 2020. She was later sentenced to four years in prison and fined 20,000 yuan.

Ms. Yin was sent to Jilin Province Women’s Prison on March 10, 2021. When her family members came to the prison on May 24, 2021, and requested to visit her, they were told that she was not allowed to be visited because she refused to be “transformed.”

Ms. Xia Yuping was arrested at her home on November 5, 2014, and was sentenced to four and a half years in prison by the Tongzhou District Court on September 7, 2015. She was released in 2019.

Ms. Shi Meilian was arrested at her home on August 6, 2007, and was detained for a while.

Mr. Liu Shangzhu lives in Jiayanzhuang Village, Woluogu Town, Yutian County. He was arrested at home by twelve officers from the Woluogu Town Police Station and from the Yutian County Police Department around 6 a.m., May 12, 2021. His home was ransacked. Many personal belongings including computers, printers, and various materials were confiscated. Mr. Liu is currently detained in the Yutian County Detention Center.

Mr. Yu Chunbo and his wife Ms. Li Fengxia were tried secretly in court on the morning of May 24, 2021.

Li Xianning (gender unknown) from Huyi District was arrested at the workplace in a residential community by officers from the Renmin Road Police Station on the morning of May 24, 2021. The details are unknown.

Mr. Kong Xiangzeng lives in Yinjiawu Village, Wennan Town. Several officers from the Xintai City Domestic Security Division, led by Feng Dayong, head of the division, came to Mr. Kong’s home on May 18, 2021. They threatened to put Mr. Kong into jail and to make trouble for his son if the father and the son refused to sign a guarantee statement. They took a photo of Mr. Kong.

The village official stopped at Mr. Kong’s home several times on May 24, 2021, and pressured Mr. Kong to go to the police department to talk to Feng Dayong and to attend the brainwashing class.

Feng Dayong called Mr. Kong’s son on the morning of May 25, 2021, and insisted that Mr. Kong attend the brainwashing class in the police department before 2 p.m. that afternoon. He threatened to officially arrest Mr. Kong if he did not cooperate.

Ms. Lin Bailing was arrested at her daughter’s home around 6:30 p.m. on May 15, 2021. Officers from the Huangqi Police Station in the Chuanying District including Officer Tian, broke the chain lock on the big metal gate and forcefully entered the home of Ms. Lin’s daughter. They ransacked the place and confiscated Dafa books and photo of Falun Gong's founder. Ms. Lin was interrogated in the police station and spent the night in the freezing cold basement. She was taken to have a nucleic acid test the next day and was sent to the detention house on the afternoon of May 16, 2021, for 5-days of detention.

Officers from the Jianqiao Police Station in Shengcheng Sub-district harassed practitioners around May 13, 2021, which is World Falun Dafa Day. The practitioners being harassed were Fu Lanying, Zhao Shuxiu and Huang Xiuqing from Yanqingsi Village and Xizhuang Village.

Zhang Wenmei, Mr. Yao Chuntang and his wife Ms. Fu Xiuzhen, and Mr. Wang Jinhua were harassed at home by the village officials who were instructed by the officers from the Jianqiao Police Station.

Ms. Zhang Jinmei from Cuijiazhuang Village was harassed at her barbershop by officers from the Jianqiao Police Station on May 19, 2021. They attempted to photograph her.

Chen Yujie (gender unknown) from Jincheng Sub-district was arrested on the afternoon of May 25, 2021. The details are unknown.

Ms. Chen Huiying, 69, from the Baoshan District, was arrested at home by three officers from the Songnan Police Station and the Baoshan District Police Department around 8 a.m. on July 21, 2020. They did not show their IDs and ransacked her home. They confiscated several Dafa books, peace cards, truth-clarifying materials, a media player, etc. After they took her to have a nucleic acid test and physical examination, they took her to the Baoshan Detention Center around 9 p.m., that evening. Ms. Chen was detained in the detention center for more than six months. She was released on the afternoon of January 29, 2021.

Ms. Teng Xiuling from Tufangbei Village in Xinxing District was harassed at home by district and village officials on May 9, 2021. When she was asked whether she still practiced Falun Gong, Ms. Teng said yes. A few days later, her husband received a harassing call and he was pressured to sign a guarantee statement on behalf of his wife. He did not cooperate.

Ms. Zheng Qinglan and another unnamed practitioner were arrested on May 18, 2021, for talking to people about Falun Gong at a farmers market in Hebei District. Ms. Zheng’s home was ransacked and her Dafa books and some bills imprinted with Falun Gong facts were confiscated. Both practitioners are detained in the Hebei District Detention Center.

Ms. Tian Fang was harassed at home by two officers from Helong Town in mid-May 2021. They confiscated seven Dafa books from her home. Ms. Tian went to the police station twice and tried to get the books back. She was told that they were handed over to the police department.

Mr. Liu Jianjiang works in the Three Gorges Power Plant. He has been harassed multiple times by people from the security section of the power plant, the Xiba Police Station, and the 330-Area Police Department. He was pressured to sign a guarantee statement, which he refused. After he was threatened to be taken to a brainwashing center, he decided not to go back to work.

Ms. Meng Jun’s husband is a teacher in the No.5 Middle School of Zhangqiu District. After Ms. Meng was found to mail truth-clarifying materials in 2019 and their home was ransacked, her husband was under pressure from the school officials, who were called by the local police multiple times

Ms. Meng’s husband received a harassing call from Wang Wentao, deputy of the No.1 Police Station of Shuangshan Sub-district in Zhangqiu District, around 11 a.m. on May 24, 2021. Under pressure, he said that his wife no longer practiced Falun Gong.

Ms. Jia Pizhen and Ms. Yang Yongzhen live in Xinping Village, Xinping Town. They were harassed at home by Peng Jin, head of the Xinping Town Police Station, and an officer on the afternoon of February 16, 2021.

Ms. Jia Pizhen was harassed at home again by officer Cai Xiaobo from the Xinping Town Police Station on the morning of April 2, 2021. Cai videotaped her home with a body camera and falsely signed a form on Ms. Jia's behalf.

Cai Xiaobo then went to the home of Ms. Duan Xiuyun and her mother (also a practitioner) who lives in the same village as Ms. Jia. Cai videotaped around and also falsely signed forms on behalf of both practitioners.

19. [Shanghai] Ms. Wang Yaping Persecuted After News of Her Harassment Was Exposed

After news about Ms. Wang Yaping being harassed was exposed on Minghui.org, Ms. Wang was subjected to even more harassment from the people from the Jiading Community and the Jiacheng Police Station. She is now under residential surveillance. Her cell phone, computer, and Dafa books were all confiscated. She is unable to contact others. Her husband signed some documents and is now cooperating with the police to monitor his wife.

Ma Zhongqiu (gender unknown) and Su Rongchun (gender unknown) lives in Majia Village, Liuerbu Town, Liaoyang County. They were reported to police for talking about Falun Gong and were arrested by officers from the Liaoyang City Police Department on May 24, 2021.

Mr. Wang Dexin in his 80s is a retired expert in the Drilling Research Institute of Shengli Oilfield. He is one of the 24 most authoritative diamond experts in China.

Mr. Wang was harassed at home on the morning of May 21, 2021. Several people from his original workplace came to harass him. When he tried to talk to the visitors about how he has benefited from practicing Falun Gong, some of them checked around his home with the excuse of going to the bathroom.

Huo Yun (gender unknown) and Yang Wenguang (gender unknown) were recorded by surveillance cameras when they hung some banners outside on May 13, 2021. They were followed by police and were arrested on May 15, 2021, when they went to another practitioner’s home for Fa study. It is not clear how many practitioners were arrested or what their names were.

Huo Yun and Yang Wengguang were arrested and directly sent to the detention center. Ms. Liu Huiru was arrested at that practitioner’s home and may face a 10-day detention.

Ms. Wang Weiqing was arrested in June 2019 and was later sentenced to five years in prison. She has been detained in the Jiangxi Province Women’s Prison and has been deprived of the right to have visitors because she refuses to stop practicing Falun Gong. Her family members have traveled a long way to the prison several times but have not seen her even once. They are worried about her.

Xue Xizeng, Zhao Xiaoxia, and Liu Xiangyan were arrested by officers from the Gangxi Police Station around 10 a.m. on May 25, 2021.

Ms. Li Shuiqing will be tried in the Yongxiu County Court on the morning of May 26, 2021. She will defend her innocence by herself in court.

Ms. Liu Lihua was harassed at home by two officers from the Zhanqian Police Station on May 18, 2021. The officers entered her home and immediately started to search the place. They left without finding anything.

Zhao Lisheng (gender unknown) lives in Shangsanjiazi Village, Wafangzi Town, Chaoyang County. Zhao was arrested by officers from the Wafangzi Town Police Station and the Chaoyang County Police Department on February 19, 2021. It is said that Zhao is detained in the Lingyuan City Detention Center.

Ms. Guo Guangrong was harassed at home by eight people from the Shuangshuinian Police Station, Shuangshuinian Community, and the Jingzhu Residential Community in early May 2021. They pressured Ms. Guo to sign a guarantee statement, which she refused. A few days later, they found Ms. Guo’s son (non-practitioner). Under pressure, he signed it on behalf of his mother.

Zhang Wenxiu (gender unknown) was harassed at home around 2 p.m. on May 25, 2021. Three people including the director of Luoqi Neighborhood Community, a police officer and a man named He Jianping, broke into her home and searched it. They did not find anything.