Sweden: Beauty of Falun Dafa on Display in Kalmar

(Minghui.org) Falun Dafa practitioners in Sweden gathered to demonstrate the five sets of Falun Dafa exercises on a stage in Larmtorget, Kalmar, on June 4, 2021. Despite the bustle around the square, many people were drawn in by the scene of practitioners’ gentle exercise movements on stage. People who had been hurrying past slowed their footsteps. Some paused to read the poster boards, and some started to learn the exercise movements.

Kalmar is a city by the Baltic Sea and is one of Sweden’s oldest cities. It has miles of beaches, quiet parks and historic architecture. It is also known for Kalmar Castle, which has a history of more than 800 years. Larmtorget, a public square in Kalmar, is known for its delicacies and shopping center. 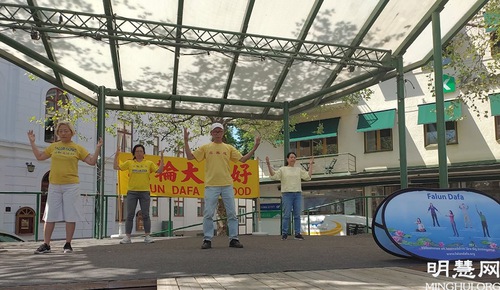 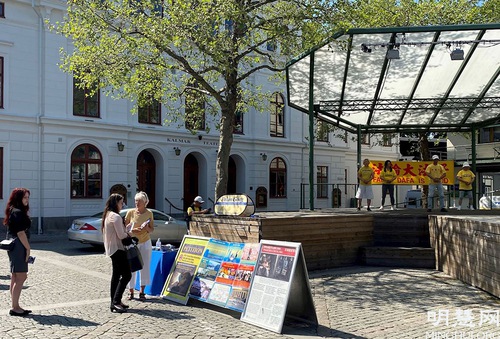 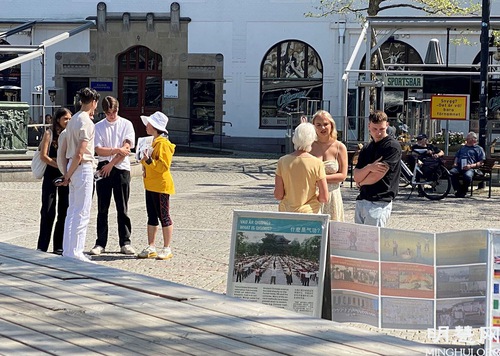 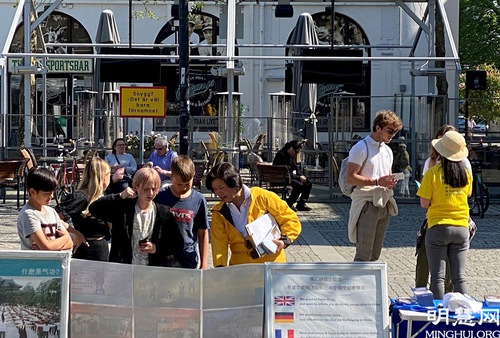 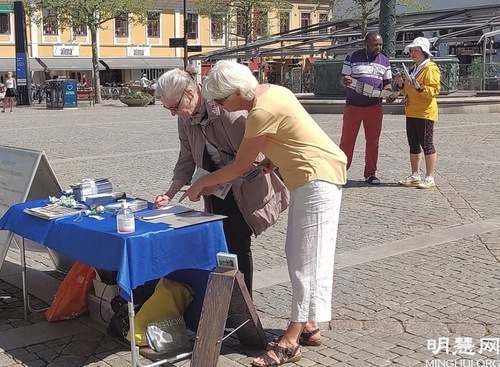 Local residents learn about Falun Dafa and sign the petition to end the persecution.

“I Hope More People Will Understand the Truth about Falun Dafa”

Two university students stopped by and started to chat with a Falun Dafa practitioner. One of the students had been following events in Hong Kong and China because his father has businesses in both countries. He was aware of human rights issues from social media and was sympathetic toward Falun Dafa practitioners who are persecuted in China. He wanted to do something to help those practitioners. He signed the petition calling for an end to the persecution and said, “I need to pass this information on to my friends, and I hope more people will understand the truth about Falun Dafa and sign the petition.”

A woman from Turkey was shocked by the Chinese Communist Party's (CCP) human rights atrocities. She read about Falun Dafa and the persecution in China on the poster boards that practitioners had set up around the square. A practitioner further explained how the CCP forcibly harvests organs from prisoners of conscience, most of whom are Falun Dafa practitioners. She took pictures of the poster boards with her cellphone and signed the petition.

“I Support You, and I Will Sign the Petition”

Monika is a politician. She had first encountered Falun Dafa in 1999. She told practitioners at Larmtorget, “Thank you for coming here. Thank you for all that you do. Thank you once again.”

An older Swedish woman walked over and received a flyer from a practitioner. She asked, “I was here about 17 years ago and learned about the persecution then. Hasn’t the persecution ended yet? Is it still ongoing?” A practitioner told her that the persecution had gotten worse and how he was brutally persecuted in China for his belief. He said he hoped that Swedes would help to hold the CCP accountable for its crimes. The woman said, “How can we tolerate a dictatorial government persecuting its people? I support you, and I will sign the petition.”

Two young French tourists said they were apathetic about politics and that there was nothing they could do about the persecution. However, a Falun Dafa practitioner explained that the pandemic affected everyone’s lives and so exposing the CCP's deception was no longer a matter of being political. They tourists agreed and said the French government is also intimidated by the CCP. They began to understand why the CCP wanted to persecute Falun Dafa and what Falun Dafa is.

The two tourists also learned about the CCP persecuting the people of Hong Kong and how it wants to corrupt universal moral values. They said they realized the importance of stopping the CCP’s crimes and that they would sign the petition online.

Anders, a well-known local reporter, was passing by Larmtorget and began chatting with a practitioner. He asked what Falun Dafa is and why it is persecuted by the CCP. A practitioner took out a flyer and told Anders about Falun Dafa's universal values of “Truthfulness-Compassion-Forbearance” and the changes it has brought to people’s minds and bodies. The practitioner also talked about the CCP’s crimes and its fundamental opposition to the values of Truthfulness-Compassion-Forbearance.

Before leaving, Anders held the flyer in his hands and said that he would continue to learn about Falun Dafa and keep himself updated about the persecution in China.

People of All Ages Learn the Exercises

A group of young children were curious when they saw the practitioners demonstrating the Falun Dafa exercises on stage. They ran up to them and tried to do the fifth exercise, which is a sitting meditation. A practitioner explained to them what Falun Dafa is, brought them over to the poster boards, and told them about both the early days of Falun Dafa’s popularity and the subsequent persecution.

The boys gave their undivided attention to the practitioner. They signed the petition and learned how to do the first exercise. 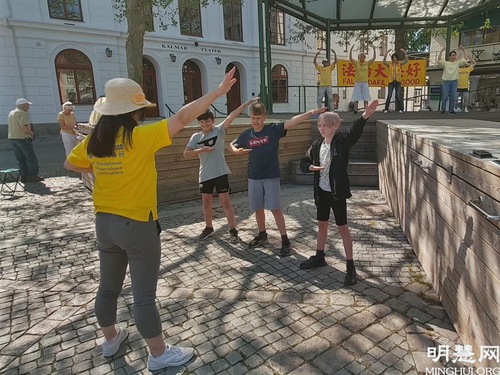 Lisa is a Chinese woman who now lives in Sweden. She had heard there would be an activity held by Falun Dafa practitioners, so she came from a neighboring city to learn the exercises. She was reluctant to leave when the activity ended and said she looked forward to her next encounter with practitioners. 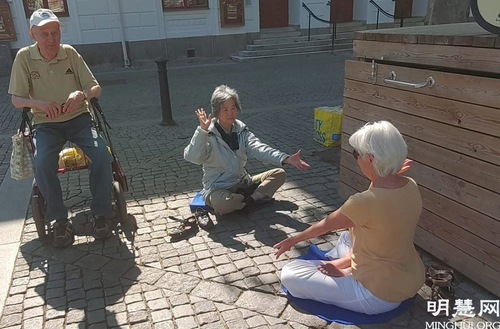