(Minghui.org) Today's news from China includes incidents of persecution that took place in 26 cities or counties in 12 provinces, where at least 63 practitioners were recently persecuted for their belief. 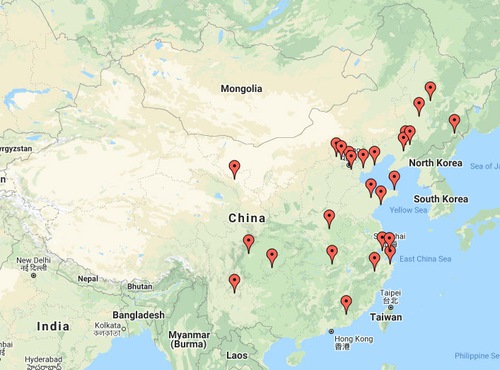 Di Xingyu (gender unknown), in their 60s, was sentenced to two and a half years of probation by the Zhangjiagang Court in 2020.

Ms. Di was arrested at her son’s home by officers from the Suzhou City Police Department in March 2021 and was taken to a brainwashing center. Her family has not been allowed to visit her.

Ms. Yang Junyan from Chaoyangchuan, was tried in the Yanji City Court on the morning of April 23, 2021.

Mr. Zhu Rui from Haidian District was arrested on the way to work by officers from the Xisanqi Police Station in the Haidian District on the morning of April 21, 2021. His home was ransacked. The police confiscated his copy of the book Zhuan Falun, a laptop computer, several boxes of sandalwood incense, a media player, and other items. Mr. Zhu was taken to the Pingxifu Police Station in Changping District that day and was sent to the No. 3 Detention Center of Beijing at around 1:00 a.m. on April 22, 2021.

Mr. Wu Chengshou was arrested on his way to work by officers from the Gaoxin District Police Department on April 20, 2021. The police then went to his home and entered it with the key they took from him. Mr. Wu’s wife Wang Xian was at home when the police came. The police handcuffed her while they ransacked the home. Their personal belongings were confiscated, including all their Dafa books, truth-clarifying booklets, more than 1700 yuan in paper currency with Falun Gong facts printed on them, more than 9000 yuan in cash, a computer, and an older computer that the couple’s son used for school. The police recorded the search and asked Ms. Wang to sign a document, which she refused.

Mr. Wu and Ms. Wang were taken to the Weicheng District Domestic Security Division for interrogation. Ms. Wang’s cousin bailed her out with 2000 yuan and she was released at around 10:45 p.m. that night. Mr. Wu was taken to have a physical examination that afternoon and he has not yet been released.

Ms. An Meizhi and Ms. Dong Yuzhen from Ganhechen Township were arrested by officers from the Ganhechen Township Police Station and the Luohe Police Department on the morning of April 20, and their homes were ransacked. Mr. Yan Lijun (non-practitioner), husband of Ms. Dong Yuzhen, was also arrested. He was released that afternoon. Ms. An and Ms. Dong were subjected to 15-day detentions and were detained in the Luohe Detention Center.

Three officers, including Ouyuan Zhancun from the Ciyutuo Police Station, came to Ms. Li Muzhen’s home on April 21, 2021. No one was at home when they arrived. Ouyuan Zhencun went to the neighbor’s house and dropped a ladder from the roof into Ms. Li’s yard. They entered Ms. Li’s home and checked around. Ms. Li soon returned. The police questioned her and asked whether she still practiced Falun Gong, whether she had a computer at home, what kind of the transportation she used, her cell phone number, etc.

Ms. Meng Meizhen was arrested at home on April 17, last year and her home was ransacked. Her Falun Dafa books were confiscated. She was interrogated at the Chengzhong Police Department. She was released that evening on bail pending trial, due to her high blood pressure.

Ms. Zhang Chunyao was arrested at home by officers from the Zhonghe Police Station in the Jinzhou District on April 15, 2021. Some personal belongings and more than 100,000 yuan in cash were confiscated. After a family member went to the police station to see her, she was taken to an undisclosed location.

Three officers, including Dong Bin from the Yuanyao Community Office, harassed Ms. Wang Yuhong at her home on February 25, 2021. They took photos and searched her home. They confiscated five media players, two desk calendars, one copy of Hong Yin, and a Falun poster.

Mr. He Xizeng was harassed at home by officers including Li Jing from the Xinkailu Police Station on April 22, 2021. When they tried to take photos, Mr. He stopped them. They questioned Mr. He and asked whether he still practiced Falun Gong.

Liu (gender unknown) from the Chalukou Community was arrested by plainclothes officers on April 13, 2021. It is unknown where Liu was detained.

Mr. Yuan Zhiyong, who owns a private clinic, was harassed.

Ms. Zhang Hongping was arrested and interrogated by police, then released one day later.

Police came to practitioner Gong’s home. They broke in when no one was at home and confiscated Gong’s Dafa books.

Mr. Yu Jingguang and his wife Ms. Chen Fang were harassed at home by police on April 19, 2021.

The police implemented the implication policy against practitioners. The practitioners are also facing pressure from their families and relatives.

Ms. Liu Zihui’s son received a harassing phone call from an official in Nanjiao Village on the morning of April 13, 2021. He was told to come to the village office to discuss her mother. Two police officers and a village official later came to Ms. Liu Zihui’s home. They made video recordings inside the place.

On the same day, three practitioners in the same village including Ms. Zhang Yizhen, Zhang Lianjie (gender unknown) and Wang (first name and gender unknown), were also called to the village office to sign a guarantee statement.

Mr. Di Shaoqun was sentenced to one year and eight months in prison. He has appealed his case.

Ms. Shi Liyan was harassed at home by members of the Yugong Community in the Tiexi District on the evening of April 21, 2021. She was told to sign the three statements, which she refused.

Ms. Wei Yuxian was harassed at home by community members led by the director of the community office on April 14, 2021. They came into her home and immediately began to search around. They grabbed the bag that Ms. Wei always carried and confiscated her media player and the truth-clarifying materials inside it.

Practitioner Ni was harassed at home by a group of people, led by village officials, on April 19. 2021. They threatened Ni that Ni’s son, daughter-in-law, and grandson would be implicated if Ni refused to sign a guarantee statement. Ni refused to cooperate.

The local community members came to Mr. Cheng Weiping’s home twice on April 19, 2021. They knocked on the door but Mr. Cheng didn’t open it.

Ms. Wang Nengying from Xian’an District was arrested and taken to the local police station. Her home was ransacked. Her son was called to take her home that evening. He was told to take her mother to the Xian’an District Police Department the next day. However, when Ms. Wang went there, she was immediately locked into a dark room for several hours before being taken to the Xian’an Detention House. Ms. Wang was detained for five days.

A member of Ms. Wang Jingdi’s family went to the Shenyang Detention House on April 22, 2021 but her request to see Ms. Wang was rejected. She was told that Ms. Wang was placed under ten-day detention and would be released on April 29, 2021.

Ms. Li Fenglian was harassed at home by two officers from the Longtanludong Police Station in Huailai County and one community member on April 22, 2021. They asked if Ms. Li Fenglian practiced Falun Gong.

Mr. Li Qingsheng lives in Erdao Village, Yongling Town. He was harassed at home by three staff members from the Yongling Township Government Office of Xinbin County. Under their pressure, Ms. Li’s wife signed a guarantee statement on behalf of her husband.

Those people then went to Mr. Sun Chengde’s home. Mr. Sun was not at home. Under pressure, a member of Mr. Sun’s family signed a guarantee statement on his behalf.

Xie Qinggen from the Stability Office of Zhihe Town, and three others from the Guangming Road Police Station and the local community office, came to Mr. Wang Ershi’s home on the morning of April 21, 2021. They didn’t allow Mr. Wang to go to work or leave the house. They intended to take both Mr. Wang and his wife Ms. Chen Dingrong to a brainwashing center. Ms. Chen went out to the market before they came but did not return. They waited at the couple’s home until 3:40 p.m. and then took Mr. Wang to a brainwashing center held by the Pengzhou City government. Mr. Wang was questioned there, and his answers were recorded. He was later allowed to go home.

Multiple practitioners in Mutou Town and nearby villages have been harassed at their homes by town and village officials since April 2021. Because the practitioners refused to cooperate, they asked the practitioners to make a gesture which looked like they were writing on paper. Then they took a photo of the scene. Some of the harassed practitioners are, Ms. Yu Suxia, Ms. Chen Xiuyun, Ms. Meng Sulan, Ms. Wang Wenjie, Ms. Wang Yumei, and Ms. Chen Surong.

Ms. Chen Kangju was harassed at home by three village officials including Li Zhengwen, secretary of the village Party committee in Junle Village, Longfeng Sub-District. Ms. Chen stopped them from taking photos. They told Ms. Chen not to practice Falun Gong. They asked her parent-in-law to join them and threatened that Ms. Chen’s job would be affected if she continued to practice Falun Gong.

Yang Hui (gender unknown) was arrested by officers from the Huamu Police Station in November 2020 and was placed under the official arrest on December 11, 2020. The case against Yang was filed with the Procuratorate at the beginning of February 2021. The case was transferred to the court on February 22, 2021. Yang’s case is now in the Fengxian District Court.

Li Qinglong (gender unknown) from Yongchang County was arrested and detained on April 20, 2021. The reason for the arrest was that Li gave someone information about Falun Gong last winter.

Mr. Jia Xiubiao was harassed at home on the afternoon of April 21, 2021. Several people from the Shacheng Town Police Station, the town government, and the community office came to his home. They collected information about his family, including their addresses, phone numbers, where they worked, their license plate numbers, where they went to school, etc.

Ms. Liu Yushu was harassed at home on April 22, 2021. Three officers including Pang Haitao from the Tumu Town Police Station came to Ms. Liu’s home. They forcibly grabbed her cell phone from her hand and registered her son’s phone number. Her son also practices Falun Gong.

Ms. Lin Meiyun, in her 70s, was harassed at home on April 11, 2021. She was told that she was seen on surveillance cameras distributing truth-clarifying materials, and told that if she refused to sign a guarantee statement, she would be taken to a brainwashing center. They also searched her home and confiscated some personal belongings including Dafa books.

Ms. Chen Fengxia from Fulongquan Town was recently arrested by twelve police officers from Taonan City. She was detained in the Baicheng Detention House, with visitors not allowed. Her home was ransacked, and her cell phone and Dafa books were confiscated.

Zhang Lei (gender unknown) was arrested by officers from the Changping District Police Department on April 22, 2021. Zhang is detained in the Liucun Detention Center.