Inside vs. Outside the CCP

(Minghui.org) History is full of lessons that we can learn, both from the kind, wise, and brave we can take as role models and from people who teach us what not to do.

A “Loyal” Official in the Song Dynasty

The year 1279 marked the end of the Song Dynasty and the ascendancy of the Yuan Dynasty, ruled by the Mongol Empire.

Before the fall of the Song, there was an official named Jian Caiwang, who was vice governor of Huzhou (in today’s Zhejiang Province). When the Mongol army was approaching, Jian commissioned a tin plate that was inscribed “Jian Caiwang: Loyal Official of the Song Dynasty.”

A hole was punched in the tin plate, and Jian strung up two silver coins and tied them to the plate. In smaller font, engraved under the heading, read, “Whoever finds my body, please help bury me. Please use these coins for my burial and tombstone.”

Jian tied the tin plate to his waist every day. He told others that, as soon as the Mongol army arrived, he would jump into the water and commit suicide to show his loyalty to the Song Dynasty. His devotion moved many people. Some Confucianists even used him as an example for their students.

On Chinese New Year in 1276, the Mongol army arrived. Soldiers looked everywhere for Jian but couldn't find him. Everyone thought he had sacrificed himself, as he had promised earlier.

After the Mongol took over the city, people saw an official with a familiar face. Dressed in Mongol clothing and riding a horse, he was very full of himself. It was Jian.

It turned out that, the day before the Mongols arrived, he had ridden out of the city early in the morning to meet the Mongol army. He surrendered and humbly welcomed the Mongol army into the city. As a result, he kept his position as vice governor of Huzhou.

But from that day on, he became the local laughingstock.

A Corrupt Official with “Positive Energy”

In history, treacherous officials such as Jian were also well known by their peers for making promises of “loyalty.” Such officials are also seen within the Chinese Communist Party (CCP). In the CCP’s documentaries, there are often officials who spoke loudly about honesty and selflessness, only to be arrested for corruption a moment later.

Of course, documentaries are only reflections of reality.

Fang Qingjian, deputy Party secretary of the Kecheng District of Quzhou City, Zhejiang Province, was put on trial on August 7, 2020. He was sentenced to 5.5 years in prison for bribery.

Ironically, Fang’s ID on the social media WeChat was “Positive Energy.” Every day he published at least two original articles on positive energy, which often went on to be picked up by news media.

“As long as we work diligently, nothing is difficult for us,” he often wrote.

Contrary to what he claimed, however, Fang often spent public funds going to high-end entertainment venues. His wife once spent 60,000 yuan ($9,200 USD) in public funds for her private use. He accepted bribes of all sizes.

After the CCP’s 18th National Congress in 2012, Fang received about 90 bribes, which averaged out to more than one a month.

“The more Fang talked about honesty and positive energy, the more frequent were the bribes,” wrote one netizen.

Fang is just one of countless examples.

Wang Yafei, Party secretary of the Anhui Province Publishing Group, used to write inspiring articles and had millions of followers on Weibo, a Chinese social media platform. Not long after that, he was sentenced to 13 years in prison for spending 51 million yuan ($7.9 million USD) for his own benefit. An announcement from the CCP news media referred to him as “greedy financially and corrupt in life.”

Shi Yaozhong, president of the Hai’nan Socialism College, was a star official in Hainan Province because he often submitted proposals on how to battle corruption. Because he accepted bribes, however, he was sentenced to 6.5 years for corruption. Not only that, he often solicited bribes and threatened bribers when the money didn’t arrive as expected.

The examples above are not exceptions; in fact, they are the rule and a reflection of the CCP’s true nature.

In the decades since the CCP took power, communism has deceived people. It tells them on the surface that the government serves the people while, in essence, the CCP's political system has become a tool for officials to rake in fame and fortune for their own benefit. 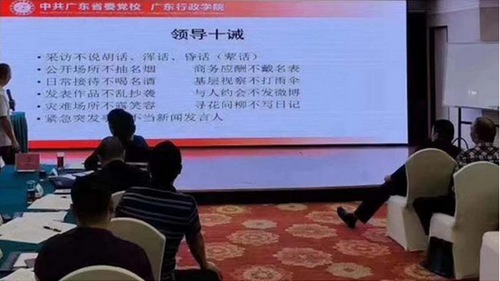 This was confirmed by leaked training materials for CCP officials at the Guangdong Province Party School (also known as Guangdong Administration College). One picture, which circulated on the internet in October 2020, depicted “Ten Avoidances for Officials.”

The presentation slide taught officials how to leave no paper trail for this misconduct:

The photo shows many trainees staring at the above on a large screen. The screen had a frame that read “The CCP Guangdong Province Party School” and “Guangdong Administration College.” Through a microphone, a speaker was lecturing officials on what they should not do.

“This proves that the CCP’s propaganda is all lies and the regime is rotten to the core,” wrote one netizen.

A similar situation happened with the Communist Party of the Soviet Union (CPSU) before its collapse. David Kotz, professor of economics at the University of Massachusetts Amherst, described his encounter with a senior CPSU official in his book titled Revolution from Above: The Demise of the Soviet System.

The conversation took place before the Soviet dissolution. The official admitted that although he was a CPSU member, he did not believe in communism.

Such a position was very common. Leonid Brezhnev was the CPSU General Secretary between 1964 and 1982. According to his niece, Brezhnev once told his brother that communism was all lies to deceive ordinary people.

Similarly, top CCP officials do not believe in communism either; they simply use it as a tool to collect fame and fortune to satisfy their greed. Officials in the circle knew what would come once the game is over, so they all try their best to maintain the status quo for their vested interests. In the meantime, they have transferred their assets overseas, emigrated their family members, and prepared several passports for themselves, ready to jump off of the “sinking ship” at any time.

Statistics showed 91% of CCP’s Central Committee members have family members emigrating overseas and even becoming foreign citizens. When the Standing Committee of the National People’s Congress reviewed the draft version of the Exit and Entry Administration Law back in 2012, about 8 million people already had foreign citizenship but did not report it in order to continue receiving pensions and other benefits.

An article from the CCP’s Central Commission for Discipline Inspection in September 2020 warned that those who transferred their assets overseas to “jump off the ship” would face investigation. “This means many people are ready to make the ‘jump’ and probably many more will get ready for the ‘jump’,” wrote one netizen.

The CCP claims to have 94 million members, but few still believe in communism. Nonetheless, most of them have inherited the wolf’s skin and continue to suppress people, destroy traditional culture, and endanger the world.

Over the past few decades, the CCP has launched waves of political campaigns to persecute all kinds of groups. They include landlords, capitalists, intellectuals, democracy advocates, and Falun Gong practitioners. The regime has now expanded its suppression to Hong Kong while actively pushing communist ideology around the world.

There have been many historic lessons telling us that totalitarian regimes will not last long and that their associates and enablers will face consequences. Over 370 million Chinese have renounced their membership in the CCP and its youth organizations. As more and more people join the momentum, the red terror will be wiped out by history once and for all.