An American Engineer Who Reads Zhuan Falun Every Day

Scott Chinn, an American Falun Dafa practitioner, has been reading the book for about an hour every day since 1999. He started by reading the English translation of the book but eventually learned to read the original Chinese version. Twenty-two years have passed and studying Falun Dafa's principles has given him great health, a tranquil mind, and happiness. 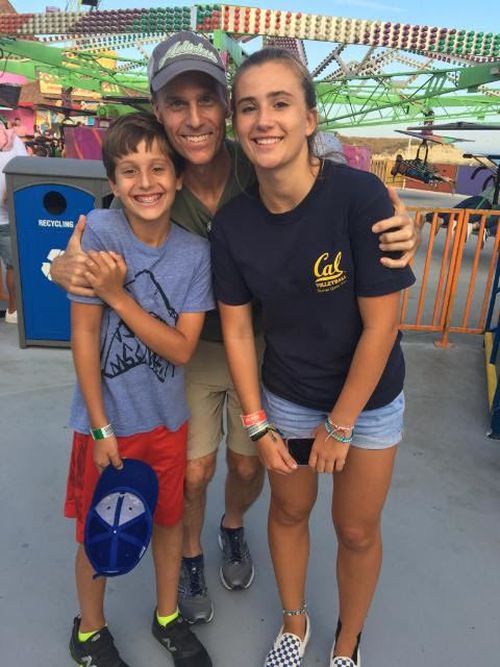 Scott with his son and daughter in 2019

Born into a middle-class family in California in 1970, Scott was admitted to a Ph.D. program in molecular biology at the University of California in Berkeley, but instead entered the field of software development as the computing industry was taking off in the 1990s. He leaned toward atheism in college but sought answers to the ultimate questions in life. He later delved into Buddhism and Hinduism and read The Tao Te Ching. However, he couldn’t find a satisfactory direction for his life or get over the distress and emptiness in his heart.

One of Scott’s colleagues introduced him to Falun Dafa in June 1999. Scott started reading Zhuan Falun and had a feeling that the book was very familiar. He started to join the group exercises in New York City. He was surprised to find he was able to get up early to go do the exercises every morning. He was even more surprised to learn that Master Li Hongzhi, the founder of Falun Dafa, had more than 100 million disciples around the world.

Scott used to follow a teacher of Tantrism who had about 200 disciples. His teacher became sick and told Scott that it was because he had to bear the karma of his disciples. The teacher eventually passed away. Scott couldn’t imagine how powerful a teacher would have to be to be responsible for more than 100 million disciples. Soon after he learned Falun Dafa, Scott gave up all of the other practices he’d delved into.

Scott experienced the power of Zhuan Falun from the start of his cultivation. Like a typical 29-year-old, he sometimes felt anxious, frustrated, fearful, or jealous. For example, he would get jealous if a girl he liked went out with someone else. The book Zhuan Falun straightened out his heart. As he read, the principles of Falun Dafa enlightened him to the reasons for his problems. He worked on these problems after realizing his shortcomings and found solutions. Day after day, he felt uplifted by the guidance of the book. Scott said this was a process of self-cultivation.

Because of his background in molecular biology and computer science, Scott knew that what Master taught in Zhuan Falun, especially the information about particles and other dimensions, was true science.

A Unique Way to Learn Chinese

Many Western Falun Dafa practitioners started to learn Chinese after they began to practice Falun Dafa, but Scott wasn’t interested initially. A trip to Beijing later changed his mind.

A month after he started practicing Falun Dafa, the Chinese Communist Party launched a brutal persecution campaign against Falun Dafa practitioners in China. To help Chinese people learn the truth about the practice and to restore its good name, Scott and 70 other Western practitioners from all over the world went to Beijing to appeal for Falun Dafa on Tiananmen Square. They were arrested pretty quickly and detained overnight. They tried to tell the abusive police officers how they had personally benefited from Falun Dafa, only to find that the policemen didn’t understand any English. The next day, they were all forced to leave China.

Scott will never forget that experience. He swore to learn Chinese so that he would be able to speak it and study Zhuan Falun in its original language. He started a hard journey of teaching himself Chinese.

Because of his job and young children, Scott couldn’t go to a language school. He had to teach himself in his spare time. The only textbook he used was Zhuan Falun. He studied the book with three different study groups each week and overcame nerves, fear, embarrassment, and disappointment. Eventually he was able to read the book as fluently as the others.

This journey took Scott 10 years. He is now able to recognize every word that appears in Zhuan Falun and pronounce it correctly.

Scott used to be plump when he started practicing Falun Dafa. As he read Zhuan Falun in Chinese more, he found his food preferences changed naturally. He began to like vegetables and fruit and no longer needed to add sugar to his tea or coffee. He used to eat a lot at each meal, but now he didn’t have to eat much and didn’t feel hungry or tired as often as he had before. Though he didn’t try to lose weight, he lost 50 pounds in a healthy way and kept in shape.

He found his body changing in the opposite way that most people’s bodies change at his age. Instead of gaining weight and growing a belly after turning 50, Scott looks fit and healthy, moves quickly, and feels energetic. He became the leading dragon dancer in a troupe composed of Western Falun Dafa practitioners. His energy level, endurance, and speed are no less than younger men in their 20s or 30s. Over the past 22 years of cultivation, Scott has never taken a day of sick leave. 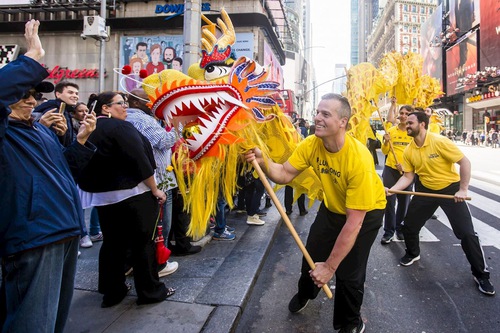 Scott said he can now feel powerful energy when he reads Zhuan Falun. No matter what mood or mental state he is in, as soon as he picks up Zhuan Falun he immediately feels clear-headed and inspired. Studying the Fa has become wonderfully enjoyable. Though he has never taken a single Chinese class or lived in a Chinese-speaking environment for a single day, Scott has validated the power of Falun Dafa with his correct pronunciation of each character in the entire book by reading the book with Chinese practitioners for an hour each day.

From 2015 until the outbreak of the pandemic in 2020, Scott clarified the truth about Falun Dafa to Chinese tourists at Rockefeller Center every day. He conversed with them in Chinese about the benefits of Falun Dafa and about the persecution in China. He has fulfilled the vow he made in 2002 after his trip to Tiananmen Square.

“Falun Dafa has been a beacon of happiness in my life,” he said. “No matter how dark it is in the world, the light of Dafa is always able to light up my heart, allow me to see through the confusion, and bring me peace and happiness. I’m getting healthier and happier every year. To me, Dafa is the origin of boundless wisdom. It has cleared my confusion about life and the universe, as well as taught me how to face difficulties and uplift myself.”

Scott would like to tell Chinese people, “My personal experiences practicing Falun Dafa for more than 20 years confirm that Falun Dafa is great and Truthfulness-Compassion-Forbearance is great. Falun Dafa is truly a practice of mighty virtue and the marrow of the Chinese civilization. As an American, I spent more than 10 years learning Chinese just to read the original Zhuan Falun. How fortunate you are that Chinese is your mother tongue! Why don’t you find the book and read it? You will see why it’s the most translated Chinese book.”