(Minghui.org) Falun Dafa (also known as Falun Gong) practitioners held a rally on Elizabeth Square in downtown Auckland on April 17, to commemorate the April 25 Appeal, when 10,000 practitioners petitioned the government in Beijing for a redress of policies and actions taken against the practice.

When she learned that the Chinese Communist Party (CCP) has persecuted Falun Dafa for 22 years, a local resident said she thought that was too long. “I’ll always stand with you and support you. I wish the whole world practiced Truthfulness-Compassion-Forbearance,” she said. 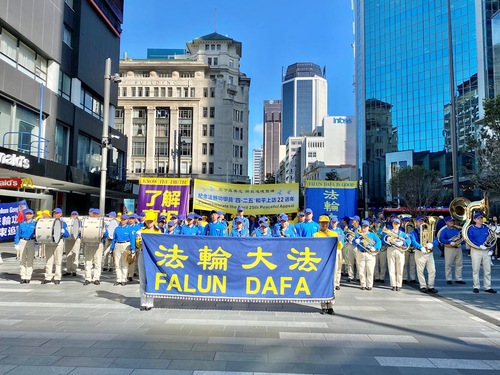 Practitioners held a rally in Auckland, New Zealand on April 17, 2021 to commemorate the April 25 appeal.

Chris Newman, a board member of the Advance NZ/New Zealand Public Party, participated in the rally and gave a speech. He is also the general secretary of the Direct Democracy Party. He said, “On this square, we see many Falun Dafa practitioners. They are kind, peaceful and rational.” 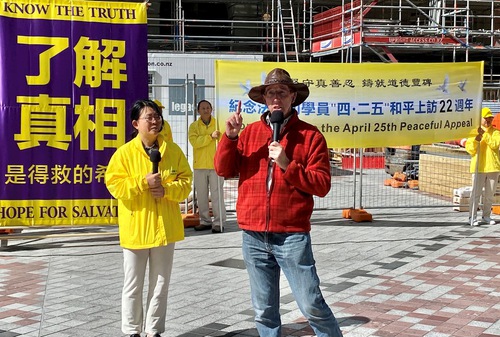 Newman said that Dafa practitioners always extend their best wishes to the family, the country, and people of New Zealand. He asked why would such a group of people, who are filled with beautiful humanity and face life positively, be persecuted by the Chinese Communist government?

He stated, “Looking back on history, we find that only dictators and monsters constantly trample on the dignity of their people. When we look back at the CCP regime, it is through creating panic and terror that it suppresses Chinese people.”

He added, “April 25th is also Anzac Day in New Zealand. Many years ago, our parents and grandfathers traveled to other countries to defeat dictatorship and tyranny. The current CCP government is just such a regime. We will never allow the ideology of communism to exist in Western society.” 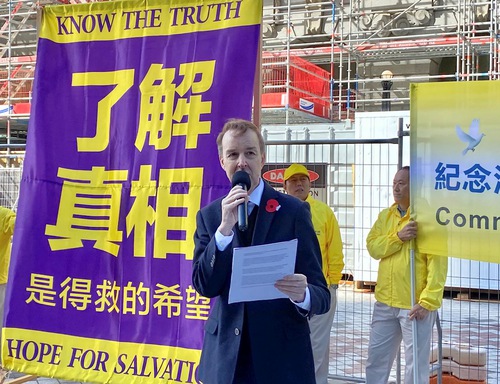 Kerry Gore addressed the rally and said, “An important event occurred on April 25, 1999. Tens of thousands of Falun Dafa practitioners called for the release of fellow practitioners illegally detained in Tianjin outside the CCP leadership compound in Zhongnanhai, Beijing. The practitioners who petitioned just wanted to defend their basic human rights. This event attracted the attention of the world and international media.”

Gore said Falun Dafa is very attractive. From children to the elderly, from people with little education to doctors and university lecturers, they are all learning Falun Dafa. Many people have benefited from the practice of Falun Dafa. Some of them recovered from terminal illnesses, some gained spiritual sublimation, and some began to live in harmony with their families.

He said, “In spite of this sweeping persecution, Falun Dafa practitioners in China selflessly and courageously sought to clarify the truth about the nature of Falun Dafa, and the truth of the Chinese Communist Party's persecution. Practitioners overseas have done the same in an effort to end this persecution, and to speak up for those who are unable to speak for themselves.”

Gore said, “I therefore I encourage you all here today to support the call to end this persecution. I hope you can speak up for those who are unable to speak up for themselves and urge our government and elected representatives to do much more to condemn the Chinese Communist Party’s persecution of Falun Dafa practitioners and demand accountability from the Chinese Communist Party.”

Editor-in-Chief of Beijing Spring: Falun Gong’s Peaceful and Rational Protest Sets a Model for the World 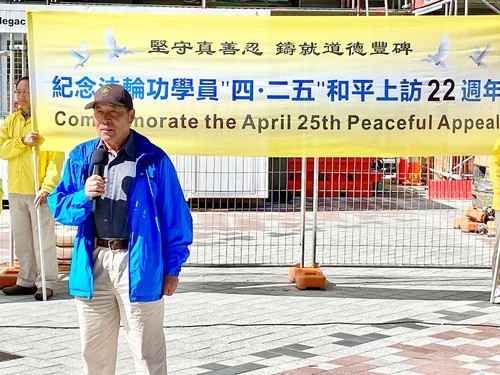 Weijian Chen speaks in the rally.

Weijian Chen, the editor-in-chief of Beijing Spring, told rally attendees, “Over twenty years ago, a group appeared in China, the Falun Gong practitioners standing in front of you today. This group believes in Truthfulness-Compassion-Forbearance. At a time when morals were declining in China, Falun Dafa's principles quickly swept through the land of China and frightened the CCP.”

Chen said, “The CCP’s tyranny is the most evil in the world, and its suppression of Falun Gong is outrageous. Practitioners resist the CCP’s repression entirely in a peaceful and rational way.

“Even in the midst of the CCP’s cruel and horrifying crime of the organ harvesting from practitioners, they protest in a peaceful and rational way, which has set a model for people all over the world.

“During the 22 years of resistance, practitioners have written countless deeds with their actions. Their history of resisting the persecution and the tyranny has also become the most important component of the Chinese people’s resistance to the tyranny of the CCP.” 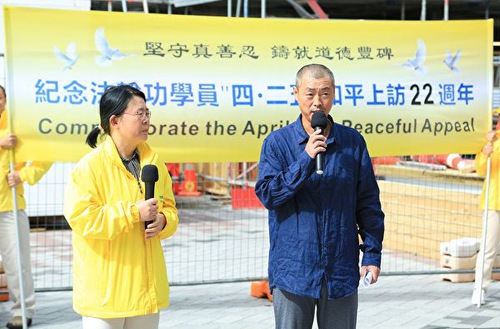 Haijiang Ding, an immigrant from China who has openly quit his membership in the CCP, said, “Falun Gong practitioners’ April 25 petition did not show the slightest tendency to violence. It was completely peaceful and rational.

“For more than 10,000 people, there was not even a piece of paper on the ground when they left. They even picked up all the rubbish that was [already] there. Let me ask: ‘Was there a ‘violent siege?’ The CCP authorities were even afraid of such a peaceful petition and then began the frenzied suppression of Falun Gong.”

Ding said, “The CCP regime brutally persecutes practitioners with all despicable means, even conducting horrible live organ harvesting. Even so, Falun Gong continues to expand. Now Falun Gong is practiced across the world in over 100 countries.”

He added, “For over 20 years, practitioners’ peaceful perseverance shows the grace of the practice and wins widespread respect and sympathy.”

Student: People Should Not Be Persecuted for Their Belief 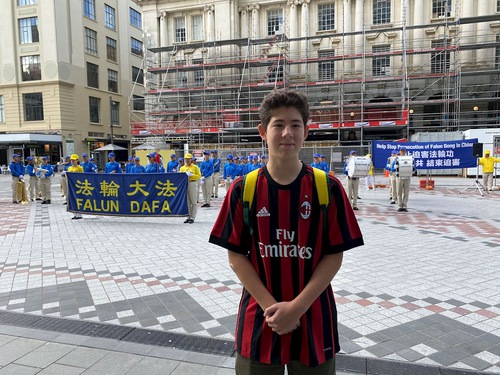 George Morfopos was a student in China for nine years. He said, “I know Falun Gong. Truthfulness-Compassion-Forbearance is a great principle. The CCP’s persecution is terrible and inhumane. People should not be persecuted for their belief.

He said practitioners have done well. Through the rally, media reports, and news in social media, they have let people know what is happening in China.

Company Owner: I Always Stand with You

Lesley Weavers, a company owner, told practitioners, “The CCP’s persecution has gone on too long. Practitioners do not commit any crimes but are taken away on the street. Many are subjected to live organ harvesting. This is horrible! I truly wish there was no such thing happening in the world.”

Also known as Falun Gong, Falun Dafa is a spiritual practice that millions around the world have made part of their lives. It consists of two main components: self-improvement through the study of teachings and five gentle exercises and meditation.

Falun Dafa's belief system offers the possibility of spiritual growth through disciplined practice. Learners are encouraged to let go of unhealthy attachments as they strive to attune their lives to the qualities of the universe: Truth, Compassion, and Forbearance.