(Minghui.org) Today's news from China includes incidents of persecution that took place in 6 cities or counties in 4 provinces, where at least 8 practitioners were recently persecuted for their belief. 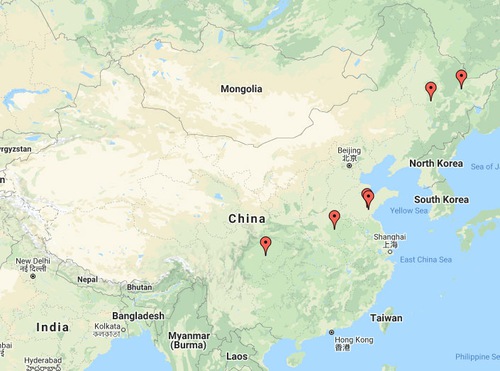 Ms. Li Chunyan lives in Xingli Village, Aoqi Town in the suburb of Jiamusi City and works in her own seed shop at Jiangchuan Farm. She was reported to police when she distributed truth-clarifying materials on how to avoid the CCP Virus (the virus that causes Covid-19). Officers from the Jiangchuan Police Station went to her shop and arrested her on the morning of February 4, 2021. They took her cell phone.

Ms. Cai Zefang, in her 80s, was arrested by several officers from the Chengnan Police Station and the Yingshan County Police Department on the morning of January 29, 2021 when she was clarifying the truth on the street. They came in two police cars and took Ms. Cai to her home and ransacked it. They took away several Dafa books, more than 2,000 yuan in paper bills with truth-clarifying words printed on them, CDs, amulets and other personal property. Ms. Cai was interrogated in the police station until 8 p.m. that day and then released. The police threatened that they “were not finished with her yet.”

Ms. Chen Jiafen was arrested by officers from the Daotuo Town Police Station and the Yishui County Domestic Security Division on January 25, 2021. She is currently detained in the Linyi Detention Center.

After Ms. Shi Weihua from Ju County was sentenced to two years, she left her hometown and had to move from place to place. Due to the pandemic lockdown, she had to come back to her hometown during Chinese New Year. She was then arrested from her home. It is unknown where she is detained.

Three practitioners in Huangzhai Town were harassed on the morning of January 10, 2021. Zhang Ling from the Shangshui County Domestic Security Division, the head of the Huangshui Town Police Station, and other officers came to the home of Mr. Teng Yuexin, who is in his 80s, and his wife Mr. Song Denglan in Dawangzhuang Village. They ransacked their home and took away several Dafa books and some copies of Minghui Weekly. Mr. Teng Yuexin and his son Mr. Teng Jincheng were taken to the county police department. Ms. Song Denglan was not taken away because of her health situation.

Ms. Wang Jiru, in her 80s, was also harassed at her home by the same people that day. She was later taken to the county police department.

Mr. Teng’s son was forced to sign the guarantee statement on behalf of his father. All of the practitioners have since returned home.

Fan Jinqing, over 70, was harassed at home on the afternoon of December 23, 2020. Wu from the Harbin Engineering Mechanics Research Institute and the team leader from the Xigou Street Sub-district Office came to Fan’s home. They photographed everywhere without permission. After Fan Jinqing pointed out that what they were doing was a violation of human rights, they did not reply and left.