(Minghui.org) Falun Dafa practitioners in South Australia gathered at Hindmarsh Square in the capital city of Adelaide on November 28 to do the Falun Dafa exercises and raise awareness of the ongoing persecution in China. Many people stopped and talked with practitioners and signed a petition calling for an end to the persecution.

Impressed by the graceful exercises, several passersby wanted to learn them. Many were moved by Dafa’s principles of Truthfulness-Compassion-Forbearance. “Please keep it up!” one person said. 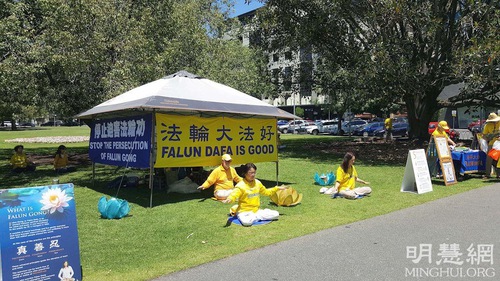 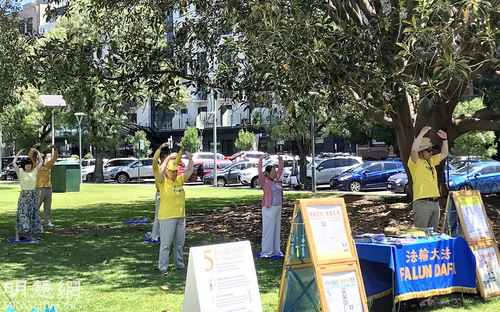 Practitioners demonstrate the Falun Dafa exercises as part of their awareness-raising activities in Adelaide on November 28, 2021. 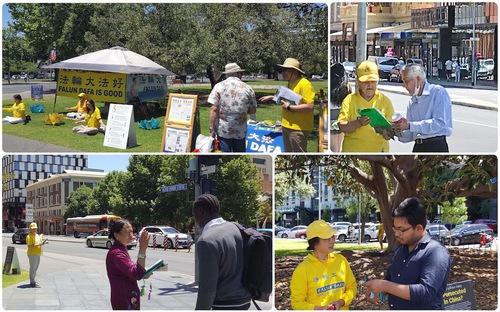 People stopped to talk with practitioners and learn about the ongoing persecution in China. Many signed a petition to condemn the persecution.

The CCP Should Be Held Accountable

Roel, an analyst who works at a hospital, was glad to see his former coworker Mei at the Falun Dafa booth. After Mei explained how practitioners in China have been mistreated by the Chinese Communist Party (CCP) for their belief, Roel signed the petition.

He explained that he received lots of help from Mei before he left his previous job. Because of his experience with Mei, Roel already knew that Falun Dafa practitioners were kind, peaceful, and hardworking. “These innocent people should be respected for their faith in Truthfulness-Compassion-Forbearance, but they are brutally persecuted in China,” he said. “The CCP should be held accountable for its crimes.”

Roel said that he would like to learn the Falun Dafa exercises. He hopes that the exercises will help him deal with his anxiety. “I will definitely try it,” he said. 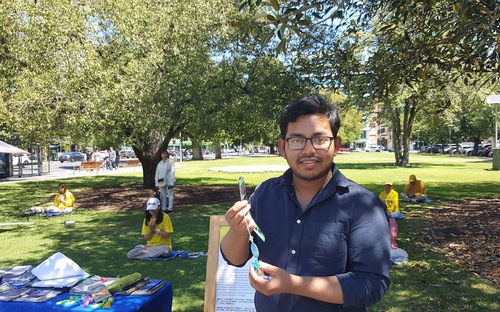 Ralf, a blogger, was glad to hear about Falun Dafa.

Ralf is a blogger who writes articles and posts them online. He already knew about the human rights violations in China against the Uyghurs and the Hong Kong democracy advocates but was shocked to hear about the harsh persecution that Falun Dafa practitioners have been subjected to for their belief.

A practitioner told him about her own experience and explained how practitioners apply the principles of Truthfulness-Compassion-Forbearance in their daily lives. Moved, Ralf encouraged practitioners to continue in their efforts to raise awareness. “I believe Falun Dafa will bring hope to our society,” he added.

When he learned that a documentary about the persecution, Letter from Masanjia, would be screened during the upcoming Human Rights Day (December 10), Ralf said he would share the information in his blog. “The CCP is doomed because it is against humanity,” he said. “Communism in other countries is dying.”

Business owner Colin Moulden and his wife Naomi were shocked to hear about the mistreatment practitioners have received in China for their belief.

Colin said, “When people blindly pursue money with no consideration of morality, they lose their true selves. In fact, people need to embrace traditional values and conscience toward a better future.”

He added, “This is where the CCP’s harm comes from. In this totalitarian regime, officials may view their colleagues or even their own family members as enemies for their personal gain. Similarly, they strictly control and persecute ordinary citizens. It is a system established on killing and destruction.”