(Minghui.org) Today’s news from China includes incidents of persecution that took place in 16 cities or counties in 10 provinces, where at least 33 practitioners were recently persecuted for their belief. 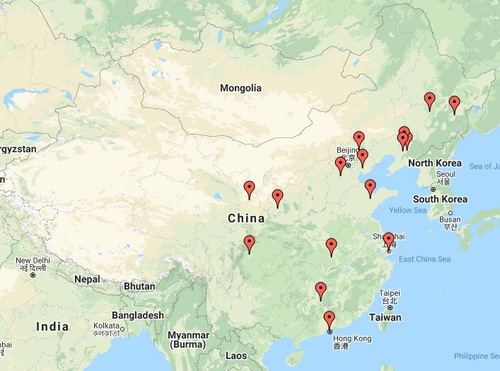 Ms. Zhang Ping was arrested while she distributed informational materials about Falun Gong in Ning County on November 23, 2021. She was detained in the Ning County Detention Center. The police ransacked her home on November 28.

Both Ms. Sun Shuxia, 73, and Ms. Yang Yazhi, 70, were sentenced to four years of imprisonment. They were taken to Jilin Women’s Prison around November 23, 2021.

Ms. Zhang Shulian was framed by the Longhua Domestic Security Team and Luanping County Court because she distributed brochures about Falun Gong during the pandemic in 2020. Even though her physical condition was bad, she was still sentenced to three years of imprisonment on November 1, 2021. The term will be served outside prison and she was fined 10,000 yuan.

The political and legal commission told Ms. Zhang to have a physical examination once every three months. If her condition improves, she will be taken to prison. She was also ordered to attend a brainwashing session every month.

Hunan Province carried out the “zero Out” campaign in September 2021. Mr. Wang Wulian was harassed repeatedly by the community personnel. He lost his job as a guard and his family was placed under huge pressure. Mr. Wang suddenly felt dizzy and was taken to hospital for emergency treatment. He is now in the ICU and cannot move or speak.

People from the 610 Office and the neighborhood committee still went to harass his wife and sister, in order to coerce him and his brother to sign documents stating that he gave up practicing Falun Gong.

Mr. Li Hongjun, his wife Ms. Ren Guifen and Ms. Ren’s two sisters were arrested by officers from the Wolong Police Station, the Mingshan District Police Department and the Benxi Domestic Security Department on the evening of December 8, 2021. Their material production site was also ransacked. It was said that they were monitored for a long time. Mr. Li was sentenced to ten years of imprisonment and Ms. Ren was sentenced to 12 years of imprisonment.

Since July 2021, officers from the Li County Police Station and personnel from the village committees went to numerous practitioners’ homes and forced them to sign documents stating that they gave up practicing Falun Gong. This is part of the “zero-out” campaign.

Lu Jinya and other officers from Xiaochen Township Police Station went to the homes of Mr. Cui Xiongfa, Ms. Liu Xiaojuan, Ms. Cui Minhua and Ms. He Guirong. On camera, they questioned the practitioners and asked if they would continue practicing Falun Gong.

Yang Wanqing and other personnel from the Nanzhuang Village went to harass Mr. Guo Sangang.

Four practitioners from the Fengrun District went to the farmers market in Wangguanying Town to distribute calendars and talk to people about Falun Gong on November 24, 2021. Ms. Pan Yaorong was taken to the police station by personnel from the town government. The police also searched her car and confiscated 2008 yuan in paper bills printed with information about Falun Gong.

Ms. Xiong was arrested while distributing the calendars. The police took more than twelve calendars from her. Ms. Xia Xiuhua, 79, and Ms. Sun Surong, 82, managed to get away.

Ms. Pan and Ms. Xiong, both in 60s, refused to answer any of the officers’ questions. They were released at around noon.

It was said that Ms. Zhang Xia would be tried by the Jianxi Court in Luoyang City, Henan Province on December 18, 2021.

Ms. Li Qiaolian, Ms. Zhao Qingzhen and her husband Mr. Zhang Youli were harassed by CCP personnel and ordered to sign their names on some documents.

Ms. Li Ying from the Baita District was arrested on December 8, 2021. Cui Rong, a couple with last names Zhao and Bao and two other Falun Gong practitioners from other cities were also taken away together with Ms. Li. There is no information about them until now.

Qin Mingguang and other officers from the Tanfang Town Police Station went to ransack Mr. Yu Xinmin’s home located in the Sunjialou Village on December 8, 2021.

The police went to Ms. Guo Xiuzhi’s home in Tanfang Group at noon on December 10, 2021 and took two calendars that were on her table.

Mr. Liu Xianyong from Faku County was arrested in July 2021. He has been detained in another city. It was said recently that he was transferred to the Faku County Detention Center.

Mr. Gu Shengchi from Gaohuang Village, Longfeng Town was harassed by Liu Wei and four other people from the village committee in December 2021. They attempted to force Mr. Gu to give up practicing Falun Gong. When he sternly refused, they grabbed his hand to press his fingerprints on documents.

Ms. Min Xiujuan from the Zijing No. 2 Village, Anting Town, Jiading District was reported to police because she talked to people about Falun Gong on December 4, 2021. The police led six people from the Zijing Community to ransack Ms. Min’s home. They confiscated many Falun Gong books, a large portrait of Falun Gong’s founder and two pictures of the Falun symbol.

Ms. Min later went to the Anting Police Station and asked that her items be returned. The police refused her request.

Ms. Xu Guozhen was arrested on June 10, 2021. She was sentenced to six months of imprisonment, but was released on December 9.