(Minghui.org) Today’s news from China includes incidents of persecution that took place in 14 cities or counties in 9 provinces, where at least 24 practitioners were recently persecuted for their belief. 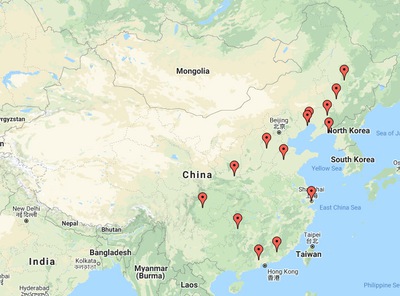 Mr. Zhou Yonglin, 69, and his wife, Ms. Sun Jiping, from Linghai City, were arrested on January 20, 2021, for talking to people about Falun Gong. They were each sentenced to five years in prison and fined 10,000 yuan.

Mr. Zhou was taken to Panjin Prison on July 14, 2021. He is currently held in the No. 20 Ward. Ms. Sun is held in the Jinzhou Women’s Detention Center. Her health quickly deteriorated after being detained, and her life is in danger.

Ms. Yang Hui was tried by the Fengxian Court on October 26, 2021. She was sentenced to one year in prison.

On December 16, 2020, Ms. Yang Li was arrested at her home by officers from the Hongqi Street Police Station. She was then taken to the No. 4 Detention Center of Changchun City on December 17. The case against her was submitted to the Chaoyang District Procuratorate on December 28, 2020.

On July 20, 2021, Ms. Yang was tried online by the Chaoyang District Court. The entire process lasted only 6-7 minutes. On October 12 Ms. Yang’s lawyer received the verdict that she was sentenced to one year in prison and fined 5,000 yuan.

On April 9, 2021, officers from the Shipai Police Station arrested Mr. Zeng Xingyang, a teacher at his workplace. The police also raided Mr. Zeng’s home that afternoon and arrested his wife, Ms. Deng Fang. His younger sister Ms. Zeng Yueling, who happened to be visiting them, was also arrested. They have been held in the Tianhe Detention Center.

On October 21, 2021, they were virtually tried in the detention center, while the judge, prosecutor, lawyers, and their families were in the courtroom of the Haizhu District Court.

On October 25, Jia Yunyan, director from the company’s Party Committee Office, said if He Yunyan did not give up practicing, he/she would be fired, and his/her children would be affected.

On October 26, several officers went to Ms. Chen Quanying’s home. They asked if she still practiced Falun Gong and pressured her to sign statements renouncing Falun Gong. They said that they had been looking for her for several years.

On October 27, 2021, Ms. Wang Guofen, from Jiutai District, was pressured by her workplace to sign a guarantee statement. They threatened to put her on unpaid leave first, and then terminate her employment if she refused to sign. Ms. Wang did not cooperate.

On October 22, 2021, five officers went to Ms. Zhang Xiucui’s home. They told her to sign a guarantee statement, which she refused.

On September 8, 2021, a village clerk called and told Ms. Shi Tianqing to go downstairs. As soon as she went downstairs, another village clerk took her to the rehabilitation center at the Jiancheng Street Office. An officer there took out a piece of paper, told her to confess her guilt because she practiced Falun Gong and sign on the statement. She refused. The officer then signed on her behalf, and forcibly pressed her hand print on the paper.

Ms. Gao Hua, from Suizhong County, was arrested by officers from the Suizhong County Domestic Security Division on April 24, 2021. On October 27, she was tried by the Lianshan District Court.

On October 20, 2021, Mr. Xie Hanzhu and his wife were arrested. His home was ransacked, and their Falun Gong books were confiscated.

Mr. Xie’s wife returned home after being held for many days. Mr. Xie is currently held in the Meijiang District Detention Center.

On October 28, 2012, eight officers from the Ganquan Police Station, Putuo District, broke into Ms. Li Li’s home in the Zichang Unit. They took her to the police station and forcibly took her blood sample. She returned home that evening.

On October 19, 2021, two officers from the Bianfang Police Station went to Ms. Pan Guizhen’s home. When they couldn’t get Ms. Pan to sign a guarantee statement, they pressured her husband to sign it on behalf of her. He refused. The town government then called Ms. Pan’s two daughters and asked them to sign on her behalf, which they refused.

Ms. Wang Huimin from Shenze County was arrested for distributing informational materials about Falun Gong on December 21, 2020. She was released on bail due to her poor health.

Zhang Yongji, from the Shenze Procuratorate, turned over her case to the Jinzhou City procuratorate, which tried her on October 27. Ms.Wang pleaded not guilty. The prosecutor could not answer her questions, so the court announced a recess and asked the procuratorate to add more evidence. Her lawyer submitted the letter to withdraw the indictment against her.

On October 28, 2021, officers from the Zhanqian Police Station, Xinfu District, arrested Ms. Wang Shuyun, in her 70s, from her home.