(Minghui.org) The 44th Thanksgiving parade in Northeast Philadelphia held on November 21 featured Falun Dafa practitioners from New York. Spectators said they loved their orderly procession, peaceful exercise demonstrations, bright costumes, and upbeat drum performances. All along the parade route, practitioners were greeted with applause and waves, and some people even bowed. 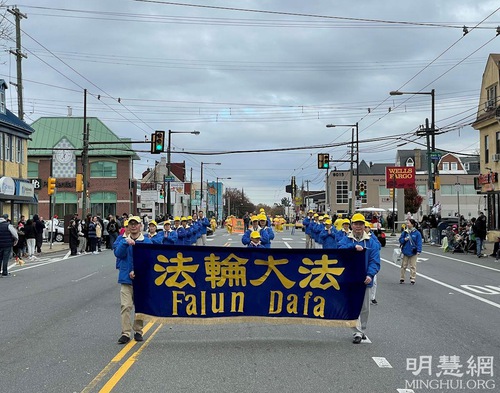 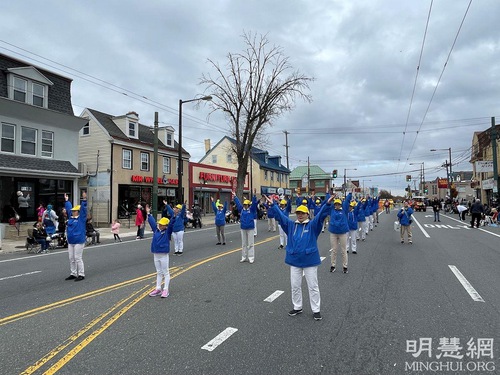 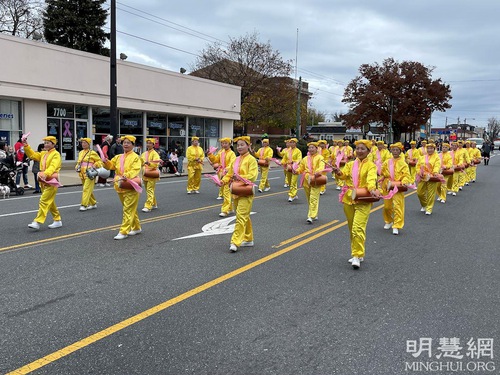 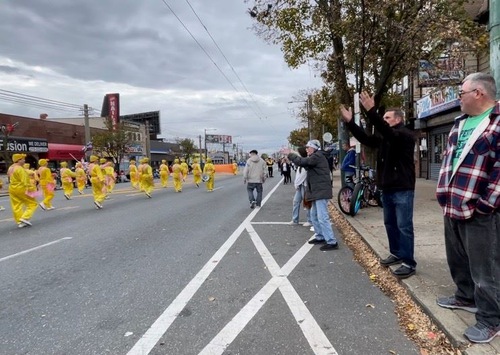 Spectators along the parade route clapped and waved as the Falun Dafa contingent marched past.

Thanksgiving is one of the most important traditional U.S. holidays. On the day of the parade, many families came early with their folding chairs and sat on the sidewalks to wait for the parade to begin. The 1.5-mile parade route followed Frankford Ave. through the main business district.

More than 130 organizations took part in this year’s parade. The parade was led by a contingent from the police department and the fire brigade with Santa Claus at the end to usher in the holiday season. Other participants included local schools, businesses, community groups, and the military. This was the first time that a Falun Dafa contingent has participated in this parade. Besides playing traditional Chinese music, the Falun Dafa waist drum team also played “Jingle Bells.” Spectators said they were delighted to hear the classic songs played by Chinese in traditional costumes. A parade-goer named William danced along to the beat of the drums. Ms. Peterson exclaimed, “I love the music. They played so well!”

Along the parade route, practitioners handed out tiny, handmade lotus flowers with the message “Falun Dafa Is Good” attached, which people seemed delighted to accept. Practitioners suggested they hang the flowers at home and remember “Falun Dafa is good, Truthfulness, Compassion, Forbearance is good” to bring them hope.

Falun Dafa (also known as Falun Gong) was first introduced to the public by Mr. Li Hongzhi in Changchun, China in 1992. The spiritual discipline is now practiced in over 100 countries and regions worldwide. Millions of people who have embraced the teachings—which are based on the principles of Truthfulness, Compassion, Forbearance—and learned the five exercises have experienced improved health and well-being.