(Minghui.org) Today's news from China includes incidents of persecution that took place in 12 cities or counties in 6 provinces, where at least 29 practitioners were recently persecuted for their belief. 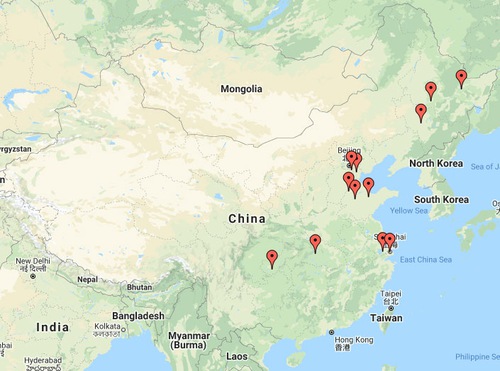 Ms. Zhang Huifang was sentenced to one year and six months in prison at the same time as Ms. Wang.

Mr. Liu Xihua, in his 80s, was reported to police for talking to people about Falun Gong a few months ago. The case against him was recently submitted to the Dongbao District Procuratorate.

Officers from the Xi’an Square Police Station and the Luyuan District Police Department arrested practitioners who were reading the Falun Gong teachings, including Ms. Lu Lizhen, on the morning of November 11, 2021. Their homes were ransacked. Ms. Lu is now detained.

Officers from the Shengcheng Police Station, along with community property staff, went to the home of elderly Ms. Zhen Mingfeng, and asked whether she still practiced Falun Gong. They confiscated several Falun Gong books and copies of Minghui Weekly. Ms. Zhen managed to retrieve the photo of Falun Gong’s founder and some books.

Twelve officers from the Erqi New Village Police Station went to Ms. Guo Xiaohui’s home on September 1, 2021. They ransacked her home and confiscated a computer, a printer, and her cell phone. Ms. Guo was taken to the police station for interrogation, and later released. Only her cell phone has been returned.

Ms. Liu Naifen from Anci District was arrested by officers from the Longhe Police Station in early November 2021. She was taken to have a nucleic acid test and a physical exam, and was detained in the police station for one night. She was released the next day due to her physical condition.

Ms. Zhao Qingxiang was arrested by officers from the Sujin Police Station on the afternoon of November 3, 2021, for talking to people about Falun Gong. Her home was ransacked and more than 100 books and her computer were confiscated. Ms. Zhao was placed in criminal detention. She is now detained in the Sujin Police Station for quarantine and will be transferred to the No. 4 Detention Center later.

Ms. Cao Xiaoyan was arrested on November 6, 2021. Her mother’s home was ransacked.

Mr. Liu Xueqin, 92, lives in Xichen Village, Wenjia Sub-district. His home was ransacked by local police officers and the village chief on October 2, 2021. Mr. Liu was not at home when it happened.

Wu Ning (gender unknown) from Nangang District was reported to police and was arrested near West Bridge on the afternoon of October 27, 2021.

Ms. Liu Zhixiu was arrested on November 5, 2021. She is being detained in the Zhonggong Detention Center.

Mr. Xu Yongqing is a senior engineer in Shanghai City. He was arrested in Longquan City, Zhejiang Province on October 20, 2021. He is currently being detained in the Longquan City Detention Center.

Mr. Tang Fenghua from Yongchuan District was arrested at home on April 28, 2021. His home was ransacked, and the book Zhuan Falun was confiscated. He was detained in the Yongchuan District Detention Center for more than six months.

Mr. Tang was hospitalized on September 25, 2021 after he began vomiting blood. He was diagnosed with tuberculosis and was released on October 9, 2021.

Mr. Zhen Guangtian, Ms. Chen Wanqiu, Ms. Wang Xiuxia, and Ms. Wang Yali live in Xinmin Village, Xinxing Town, Shuangcheng District. They were reported to police for talking to people about Falun Gong in Yongzhi Village, Xingfu Township, Shuangcheng District. They were arrested by officers from the Xingfu Township Police Station on the afternoon of November 13, 2021. The four practitioners were taken away by Wang Yubiao, head of Shuangcheng County Domestic Security Division, at around 6 p.m. that evening. It is unknown where they are being detained.

Li Hua (gender unknown) was arrested at Li’s workplace by officers from the Hou Town Police Station on the afternoon of November 1, 2021. Li was interrogated, and the home and dormitory were ransacked. Li was released that evening.

Ms. Liu Lijie was tried by the Xiangyang District Court on October 12, 2021. The court did not abide by legal procedures and did not notify her family members and her lawyer three days in advance of the trial. They also forged transcripts to frame Ms. Liu, rejected the defense attorney hired by the relatives, etc. Ms. Liu refused to cooperate during the trial. Later, the hearing was announced invalid after her lawyer’s protest.

The new hearing is scheduled in the Xiangyang District Court to be held on November 16, 2021.