Numerous audience members commented in amazement at the rich spirituality of Chinese culture and its connections with their own values. 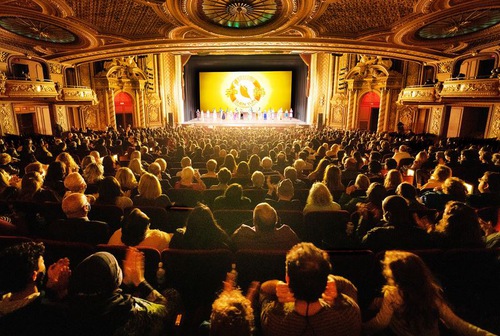 The Shen Yun World Company's curtain call at the Boch Center Wang Theatre in Boston, Massachusetts, on November 14. The company presented two performances in Boston on November 13 and 14. 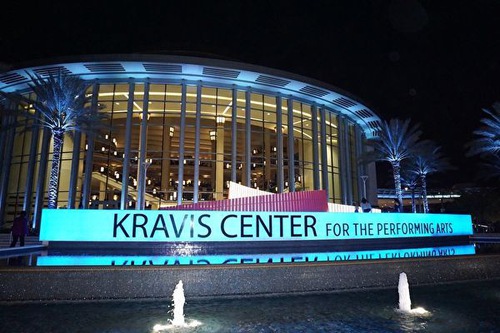 The Shen Yun World Company presented two performances at the Kravis Center for the Performing Arts–Dreyfoos Hall, in West Palm Beach, Florida, on November 8 and 9.

“My Heart Is Warmed” 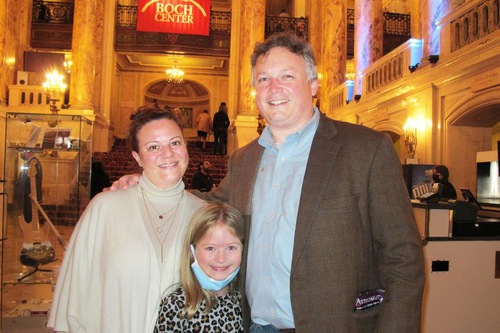 Kristan and Angus Jennings and their daughter at the Shen Yun performance.

Kristan and Angus Jennings and their daughter saw Shen Yun at the Boch Center Wang Theatre in Boston, Massachusetts, on November 13.

“It’s so vibrant. And the costumes are so amazing,” said Kristen Jennings, an early childhood teacher. “It adds so much to what you see... The fluidity of the dancers. Very colorful, very engaging.”

“I think it connects you to something that... people are missing in China right now,” Kristen said. “And it’s beautiful. And it should be restored, and it should be treasured... It’s very important for all of us to come and see something like this.”

“I know that my heart is warmed and I know that my eyes are open. And each dance tells a story that takes you back in time, but also makes you think of what’s going on in your own life right now.

“[The soprano was] phenomenal. Oh, my gosh, I had chills. It is so moving... And so emotional and from the heart. I loved it.”

Angus also agreed, “The singer was transcendent, quite wonderful... It was something that we don’t experience very often in our culture.”

Kristen said she believes Shen Yun has great educational value for children. “If we can get young children to come in and see this, and to enjoy it and to talk about what they’ve seen,” she said. 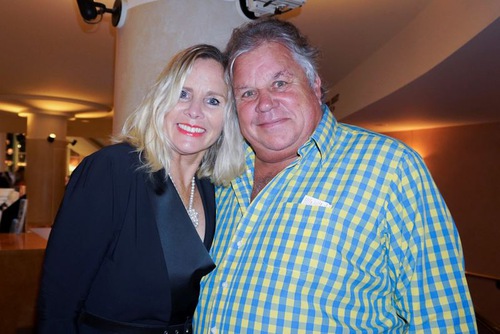 Kat Conway and a friend at the Shen Yun performance.

Kat Conway, a filmmaker and former dancer, saw Shen Yun at the Kravis Center for the Performing Arts in West Palm Beach, Florida, on November 9.

“I grew up dancing, so I have an extra appreciation for these dancers,” Ms. Conway said.

“It’s absolutely incredible to learn more about the Chinese culture—a different aspect or different interpretation,” she said. “I didn’t realize they were so spiritual.”

Ms. Conway said she enjoyed the dances from different areas of China and was fascinated to learn about the “Yi” people.

“Their dances reminded me of country-western [or] Dutch, which is very interesting,” she said. 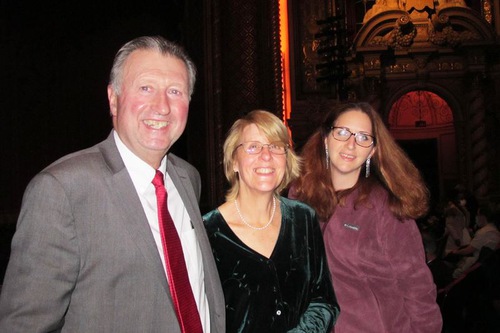 “I thought it was fantastic... very stimulating. I am just totally impressed by it,” Mr. McDougall said.

He believes that the West, including himself, has a very shallow understanding of ancient Chinese culture.

“I know so little about the Chinese culture... It’s just so many thousands of years and such a deep culture, and yet we understand so little of it... That’s why [Shen Yun is] interesting, because it ties, looking back, looking forward, where we are today, and all those cultural things,” he said.

“It’s interesting because it’s traditional Chinese dance and it’s not China today—this is China before the communist party took over. And the fact that China, of course, is an ancient culture, and it would date Western civilization by thousands of years. And it takes you through all that and it reinforces the fact that China has deep roots in religion... that was all stamped out by Mao and the communist party and continues to be stamped out today.

“The Chinese people are absolutely dominated by the communist party, and not allowed to practice religion because communism in itself is the religion you’re supposed to practice.

“It’s just that people are afraid, right? And therefore, they can’t express themselves in traditional ways,” Mr. McDougall said.

He also spoke about Shen Yun’s messages about the power of universal compassion and kindness.

“Whether you truly believe in a God or whatnot, the principles are there... [Shen Yun] brings forward the whole introspection of improving yourself, as opposed to the communist party, which is: you’re supposed to give up for the state, as opposed to look inward and make yourself a better person,” he said.

Mr. McDougall also noted the importance of culture for all societies. 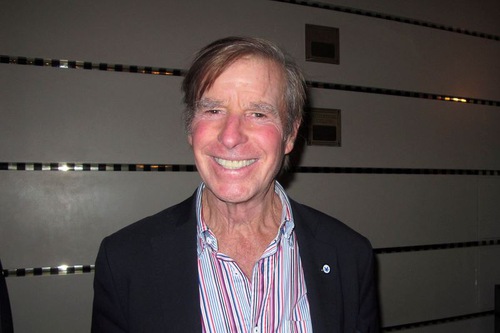 John Garvey, the CEO and President of Garvey Venture LLC, saw Shen Yun at the Kravis Center for the Performing Arts in West Palm Beach, Florida, on November 9.

“I think it’s extremely important to preserve those cultural traditions and, and then to pass them on to future generations... to others in the world,” Mr. Garvey said.

“It’s heartrending to see the oppression,” he said, referring to the dance telling the story of Falun Dafa practitioners who are persecuted for their faith. The story ends on an uplifting note of hope.

“I think it’s a universal feeling or aspiration. I think it resonates in other religions too, particularly like in Christianity, for instance,” he said. 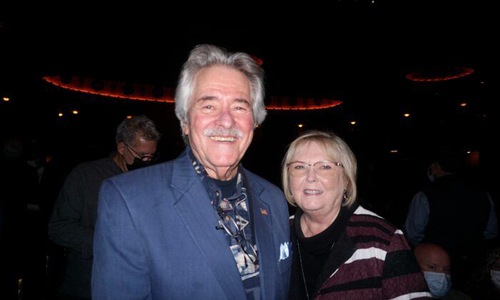 Fred Tobman and his wife at the Shen Yun performance.

Fred Tobman, a retired owner of an insurance agency, saw Shen Yun at the Boch Center Wang Theatre in Boston, Massachusetts, on November 14.

“I’m thrilled to be here,” Mr. Tobman said. “I thought it was marvelous! Absolutely outstanding! [Shen Yun] gives you a lot of history.”

“I don’t have one favorite at all because [the dances] were all so very well done,” he said.

Mr. Tobman said he was touched by everything he saw.

“The music is excellent. Everything... Even when I can see a horse in the background and his tail is swishing, all of these little things [Shen Yun] thought of. Somebody’s brilliant about this. And when they have to take off and they’re going back up to Heaven, it’s like they’re really going. You have to see this to believe it,” he said.

Mark and Stacey Bryne at the Shen Yun performance. 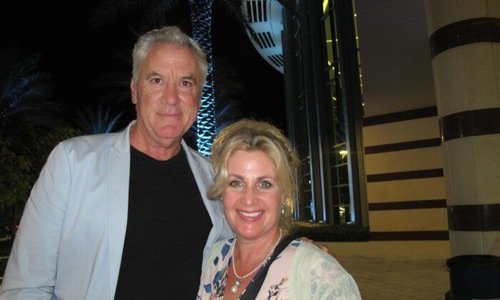 Mark Byrne, a general contractor for Byrne Brothers, saw Shen Yun with his wife Stacey at the Kravis Center for the Performing Arts–Dreyfoos Hall in West Palm Beach, Florida, on November 8.

“I like that they’re trying to keep the traditions alive and they believe in God and they don’t believe in communism,” Mr. Byrne said. “We feel the same. We have to have a faith in a power greater than ourselves and we don’t want it to be the state. We have to believe that something is over the state.”

The last piece of the performance portrayed a higher being performing a miracle, saving the good people of society. The Byrnes felt that this scene resounded with their belief in Christianity.

“There is a divine spirit out there, and we are all divine in a way,” Mr. Byrne said. “We are spiritual beings, we just have these human bodies and we have to tap into that. That was what we experienced tonight.”

In another piece, the music and the dancers on stage told the story of Falun Dafa practitioners being killed for their organs.

“We are aware of what goes on in China because we hate the idea of communism, and we don’t want to see it come to this country,” Mr. Byrne said. “When governments try to take control of the people, it’s not a good thing.”

“And more people are becoming aware that this is going on, abortion, organ transplants, and organ harvesting, it is all becoming more [well-known by the] mainstream,” Mrs. Byrne added.

Regarding Shen Yun‘s mission to revive 5,000 years of Chinese civilization, Mr. Byrne said, “The music, traditions, dancing and culture, I think it is important for any culture to survive. They need to keep their history alive.”

“It’s beautiful, really elegant. It was powerful. It was a beautiful night,” Mrs. Byrne said.