(Minghui.org) “The Chinese government should end its fight against Falun Gong and respect the right to freedom of religion, as guaranteed by the constitution,” said Hanno Schedler, in a statement released by the “Society of Threatened People (STP),” a German human rights organization, commemorating the historic appeal by 10,000 Falun Gong practitioners 21 years ago.

Schedler is one of the STP experts on genocide prevention and the Responsibility to Protect.

Over 10,000 Falun Gong practitioners gathered in Beijing on April 25, 1999, near the State Council Appeals Office, to petition for the release of 45 practitioners unlawfully arrested in Tianjin, and for an environment to freely practice their faith. They quietly came and left, leaving behind not even a tiny piece of trash on the ground. They even cleaned up the cigarette butts left by the police.

Despite that then-Prime Minister Zhu Rongji promised to look into the issues, Jiang Zemin, the Chairman of the Party at the time, ordered the nationwide persecution of Falun Gong three months later. The persecution continues to this day.

The STP's statement was released on April 24 2020 and titled “Falun Gong mass protests 21 years ago (April 25) - China continues to criminalize members of the meditation movement.” The STP urges the Chinese communist regime to end the 21-year-long persecution of Falun Gong and also the German government to protect Falun Gong practitioners from being discriminated against in Germany.

“It is estimated that more than 4,300 Falun Gong members have died in police custody, in labor camps, or prisons. Many followers of the movement were arrested several times. The authorities had especially focused on older women, who were often accused of publicly promoting Falun Gong. Also, practitioners are increasingly becoming victims of illegal organ removal.” said the statement.

It also called out the persecution of Falun Gong on Germany’s soil, as the eighteen Confucius Institutes (Chinese classrooms in western universities sponsored by the communist regime) openly banned its staff from practicing Falun Gong.

“German policy must not allow the religious persecution of the Chinese government to continue on our territory,” said the statement.

The statement added, “The Chinese government even persecutes people who merely dared to defend Falun Gong practitioners: Gao Zhisheng, one of China's most prominent human rights lawyers, has repeatedly advocated for people of Christian faith and for Falun Gong members. In 2017, the human rights activist, who was nominated for the Nobel Peace Prize twice, disappeared without trace.” 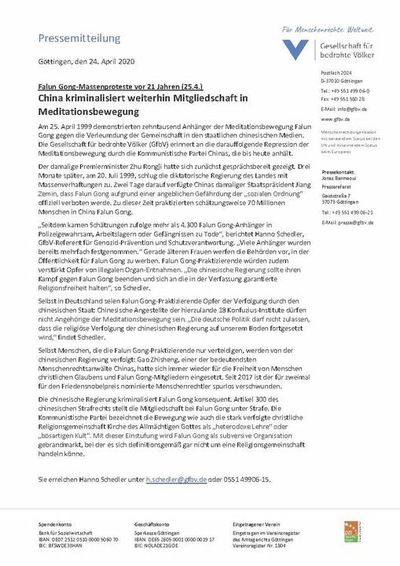 Press Release from the Society for Threatened People (GfbV)