(Minghui.org) “Painful Truth—The Falun Gong Genocide” was screened at the Berney Theater on January 9, 2020. The documentary was produced by Never Again Productions, a Canadian film company. The event was organized by B’Nai Brith Canada, League for Human Rights, and Winnipeg Friends of Israel. 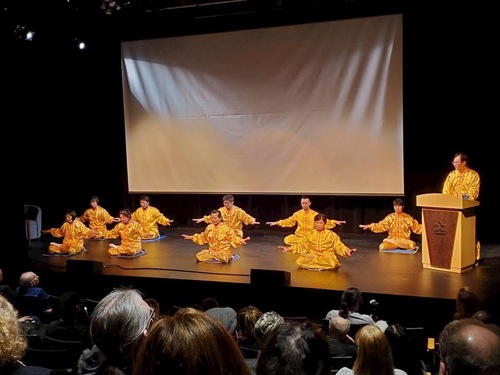 Nine Falun Gong practitioners demonstrated the exercises before the film screening on January 9, 2020.

Producer Yolanda Pappini-Pollock told the audience why she decided to make the film about the genocide of Falun Gong. “As a Jewish woman and a daughter of a Holocaust survivor, I know too well what it means to be de-legitimized, attacked, and persecuted because of your beliefs, race, or ethnicity. I know how it feels to be an oppressed minority without the means to fight for your rights, dignity, or hope,” she said.

“By creating films about human rights, I am inspired to help victims of persecution gain a sense of hope. I want to ensure that their stories are heard and that their suffering is documented. As a filmmaker, I am privileged that I can use a powerful instrument to give a voice to victims of persecutions and bring their stories to the general public. I want the victims to know we hear them and feel compelled to help them.”

The documentary “Painful Truth” is based on a scientific research paper “Cold Genocide: Falun Gong in China” by professor Maria Cheung, of the University of Manitoba, and others.

Many audience members were shocked to learn that such a cruel and large-scale persecution had persisted for so many years and it is still on-going.

Professor Cheung and human rights lawyer David Matas met with the audience during an open forum after the screening and answered questions.

Mr. Matas said, “This film makes a distinctive contribution to the documentary series on this issue because of the progression it shows from torture to organ harvesting. One of the constant struggles we have to face in raising public awareness is incredulity that the killing of innocents for their organs on an industrial scale could be happening. One even sees this incredulity in the film.

“One answer to how this abuse could be happening is the progressive brutalization of the perpetrators through torture, which the film graphically and eloquently depicts. Torture is not only a harm; it is also a threat. Torturers do not want to leave their threats empty by doing nothing to those who resist torture. But what will they do? For China, the film answers that question.” 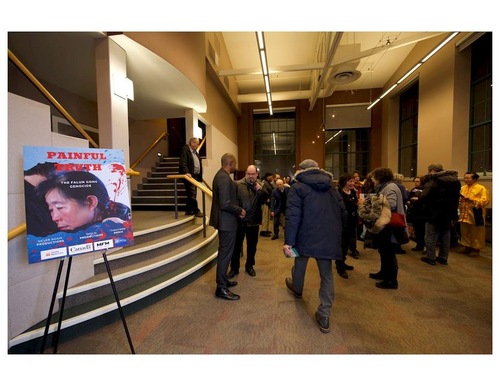 After the film screening audience members asked questions about the persecution in China.

One audience member said that the film was done extremely well done, “It covered the horrible reality of the persecution in a way that people could handle—there were features of the film that softened the gruesomeness.”

He added, “The discussion afterward with the producer and David Matas was very informative. The message that I got was that because the people of China are muted by the authoritarian government, they cannot speak up, and because they cannot speak up, we who live in a country where free speech is the norm must speak on behalf of the victims of the Chinese state. That is our responsibility. I very much enjoyed the Falun Gong demonstration at the beginning which also helped create a peaceful atmosphere.”

One audience member commented that he was, “deeply moved by the documentary. So evil what is being done against the Falun Gong. Very eye-opening. This film needs to be widely shown.”

Another viewer said the documentary was brilliant and brought the truth to light. “Everyone needs to see this to understand what is really going on around them. We need to stand together and do our part in helping this world be a better place.”