The Seemingly Impossible Is Possible

(Minghui.org) Not many people foresaw the fall of the Berlin Wall, the execution of Romanian communist dictator Ceausescu, the dissolution of the Soviet Union, the toppling of Lenin statues, and the hanging of Iraqi dictator Saddam Hussein. Those taken by surprise when totalitarian regimes suddenly fell often tend to overlook the most important players in the events–the people.

Ancient Chinese philosopher Lao Zi said, “The water supporting a ship can also upset it.” It can be taken to mean that people who support rulers can also overthrow them.

Throughout history, no single dictator has successfully upheld their reign forever, no matter how powerful they seemed to be. When public opinion reaches the tipping point, nothing can stop it from turning history over to the next chapter.

Before the collapse of the Berlin Wall, people sacrificed their lives by climbing over the wall. Many brave people also took to the streets again and again to protest against totalitarianism and demand freedom.

When the time came, Soviet soldiers refused to fire at the protesters and communist officials gave up on defending the corrupt regime. At Ceausescu’s own rally, tens of thousands of people echoed a single shout, “Down with Ceausescu.” Saddam’s loyal Republican Guards disappeared when people started pursuing him.

A month has passed since Election Day, but the confusion and chaos continue. While the democratic candidate has declared himself the winner and initiated the power transfer process, President Trump is still working through legal battles to prove that voter fraud had altered the election result.

Some people feel that President Trump’s chance of victory is slim after some courts rejected his lawsuits and the deadline for the swing states to certify their election results draws near. However, many more people have realized that election integrity and America’s system of democracy are at stake, that the country is facing a Constitutional crisis, and that the election is a battle for the very existence of the United States and the principles it represents.

Many people have thus decided to join the battle–not just for Trump, but for the future of themselves and the country.

Voices from the American People

Trump received a record 73 million votes. His actual number would have been even higher if some of his votes weren’t switched to the other side. Among the Trump voters were many long-time Democrats, Latinos, and Chinese who have escaped from communist countries, and African Americans and blue-collar workers. Many of the seemingly impossible Trump voters began to support Trump after seeing what he had done for the country.

To show his support for Trump, Buddy Hall spent over $1 million to buy a bus and decorated it as a “Trump Train.” It was covered with slogans such as “Law Enforcement for Trump,” “Veterans for Trump,” and “Christians for Trump.” 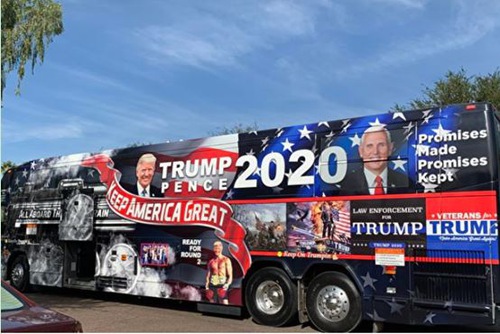 During an interview with New Tang Dynasty Television, New Jersey resident Jon Huston said, “If America goes down... the Chinese Communist Party (CCP) will be all over the world and no one will be safe. The situation looks bad. But God is God. God created us, and God loves everyone. He doesn't want us to live under communism. He wants us to live free, and Trump is the man He chose. God will triumph.”

In this election, some fraud techniques and suppressive means have been reported, including untruthful media coverage, spreading of hatred, threats and intimidation, censorship, and so on.

However, the more rampantly the truth is suppressed, the more people will wake up to the fact that this is not just a routine election but rather whether the United States will be overthrown by communism and whether Americans and their children will still be able to continue to live the “American Dream.”

In California, a traditionally blue state, voters rejected Proposition 16, a plan to distribute college admission and job hiring opportunities based on race, sex, color, ethnicity, and national origin rather than academic performance and qualifications. The 12 House of Representatives seats the Republican Party has gained in Congress is another indicator that voters are rejecting the socialist agenda proposed by the other side, said House Minority Leader Rep. Kevin McCarthy, R-Calif., in an interview with Fox News “Sunday Morning Futures.”

The U.S. is “one nation under God.” It is a land that offers freedom of speech and religion, as well as individuals’ right to pursue liberty and happiness.

When people uphold kindness and faith in their hearts and stick to traditional values, they will be blessed and justice will prevail. The seemingly impossible will become possible.

“Behind the Socialists’ Hidden Agenda”