(Minghui.org) The 2020 Falun Dafa Cultivation Experience Sharing Conference of the Southeast U.S. was held in Atlanta on November 29, 2020, with participants coming from Georgia, Alabama, South Carolina, Tennessee, Mississippi, and Texas.

Twenty-one practitioners shared their cultivation experiences and insights during the day-long conference.

Western practitioner Olexiy said that he often did things superficially and was not always focused on the Fa. He realized the problem was rooted in an attachment to being comfortable and pursuing a routine and stable life.

He came to understand that the key point of cultivation is to correctly balance the relationship between Dafa work and family. If he places Dafa first, everything is in harmony.

College student Chloe is a Vietnamese-American. Her older brother gave her Zhuan Falun in 2017 and suggested she read it. She read it and three months later decided to begin practicing because she learned that only cultivation could bring her peace. She said that Falun Dafa helped her find the meaning of life, which is to follow Master in the Fa-rectification.

Chloe had a strange dream near the end of 2019 in which everyone was dressed in ancient Chinese clothing. A girl spoke to Chloe and mentioned a village named “North River.” Chloe found the Chinese village called “North River Village” (Beihecun) on the map after she woke up. A few months later, the coronavirus pandemic spread all over the world. She remembered the dream and understood that she was reminded to clarify the truth to more people.

Vietnamese practitioner Phat used to own several companies. He sold the majority of his assets and only kept enough to support the family after he began practicing Falun Dafa so that he could have more time to study the Fa teachings, clarify the truth, and help promote Shen Yun Performing Arts.

He was the first one to practice Falun Dafa in his family. His mother and wife joined him a year later. Now, his entire family practices, including his younger brother, sister-in-law, sister, and brother-in-law.

Tom Nguyen, a young Vietnamese practitioner, said that he kept to a good routine for the first two years after he obtained the Fa. He woke up early to send forth righteous thoughts, followed by doing the exercises for an hour. He had plenty of energy all day.

However, after two years he relaxed. He became very tired during the day and couldn’t concentrate on his tasks. He saw two options: One was to sleep more and do fewer exercises and Dafa projects, and the other was to sleep less and exercise more. He chose the second one. He joined a phone project and meditated every morning. His mind became clear after he did the meditation exercise.

Tom reminded young fellow practitioners to be vigilant about the temptation of personal interests and that only by putting cultivation as the top priority can one balance a respectable profession and the xinxing of a genuine practitioner. 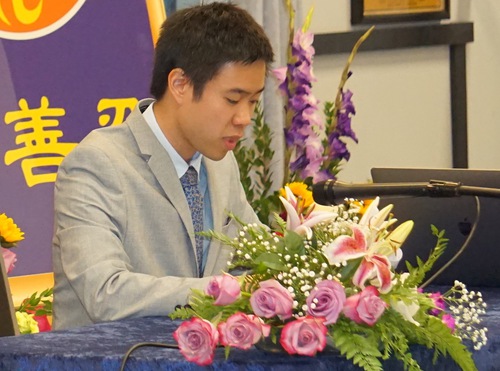 Practitioner Tom Nguyen reminds young fellow practitioners to be vigilant about the temptation of personal interest.

Westerner practitioner Sapphire said her father taught her Falun Dafa when she was little but she stopped practicing when she grew up. She experienced what it felt like to be an ordinary person and her life was miserable.

Now 19, Sapphire returned to cultivation practice. It was difficult at the beginning. She had a lot of negative thoughts when she did the three things: studying the Fa, doing the exercises, and sending righteous thoughts. After persisting, she can do them well now.

Frank, a Chinese practitioner, couldn’t help but notice a fellow practitioner was very anxious, went to extremes, and had a lot of jealousy. After six months, Frank suddenly realized one day that he had been looking at others' cultivation states—it was time to examine himself.

Looking inside, he realized that he saw the problems in others because he had the same problems. He was extreme and jealous himself, and these were what he needed to improve on. 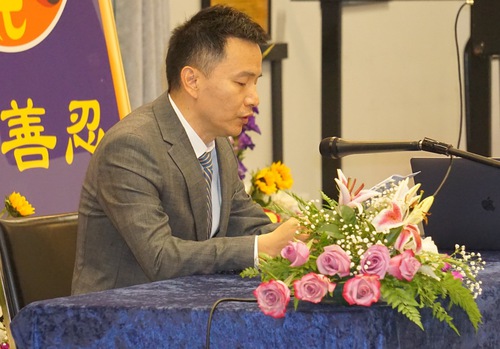 Practitioner Steve said that he benefited a lot from reciting and memorizing the Fa. When his heart is not calm enough, even though he reads the Fa, he can’t understand the meanings. Learning it by heart, he said, is totally different, because if you don’t concentrate, you can’t remember it. This forced him to calm down and concentrate on studying the Fa.

Being able to remember the Fa also helped him to remember to be righteous and view things as a practitioner no matter what.

Kevin, a Chinese practitioner, said he was argumentative before he began practicing Falun Dafa. He focused on improving his tolerance after he obtained the Fa. For the last two decades he has been tolerant and has not had a single argument with other practitioners during group Fa-study. 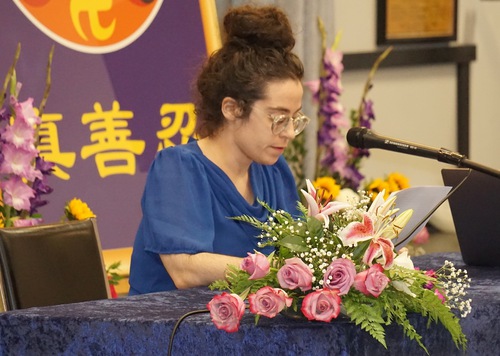 Erin thanked Master for saving her and fellow practitioners for their help. Dafa brought her back to the correct path and she repaired her relationship with her parents.