Deniers and Believers of Voter Fraud Face off at First U.S. Senate Hearing on Election Fraud

(Minghui.org) The Senate Homeland Security and Governmental Affairs Committee held a hearing on December 16, on “Examining Election 2020 Irregularities,” the first hearing on election fraud at the federal level in the United States. The hearing was organized by Senator Ron Johnson, Republican from Wisconsin and chairman of the Senate committee. 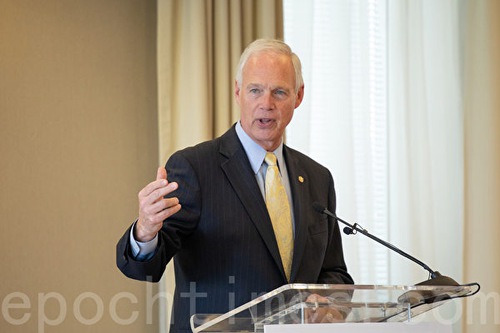 The hearing began at 10:10 a.m. and lasted nearly four hours. Senator Johnson gave an opening speech, followed by witness testimonies and questions from senators from both parties.

Senator Johnson pointed out that election irregularities and fraud have long existed in the U.S. He said he was accused of promoting “conspiracy theories” by the top Democrat in the senate when he mentioned a report in December 2019 by democratic senators and representatives who expressed their concerns about the security problems of voting machines.

He said a large percentage of the American public didn’t believe the election was legitimate. He said that the Russian collusion narrative the Democratic Party had been pushing in the past four years and their spending taxpayers’ money, countless hours and energy on the investigation of the hoax had weakened people’s faith in the government and the “ongoing suppression and censorship of conservative perspective, by bias media and social media, adds fuel to the flames.” That’s why he thought it was important to have the hearing to “restore the confidence in our election system.”

Judge Starr discussed the importance of honesty in elections, Commissioner Palmer explained the role of the EAC to ensure a fair election, lawyers Banal and Troupis, as well as Representative Ryan, presented convincing evidence of election fraud, and Krebs claimed the 2020 election was the most secure election in history.

When it was time for senators to speak, Republican Senator James Lankford of Oklahoma said that when Congress decided to investigate the Russian collusion hoax, their reasoning was that “32% of the people believed that the Russians had influenced the outcome of the election in December of 2016.” Now, according to a new poll this December, 46% of voters believed there was election and voter fraud this year, including 80% of Trump voters and 16% of Biden voters. He acknowledged that there was voter fraud and he supported the effort to find out what had happened and get things right.

Despite the overwhelming evidence of fraud presented at the hearing, Democratic Senator Gary Peters (D-Mich.), a ranking member on the committee, still denied any interference of the election. He said, “deciding to move forward with this hearing is still dangerous” and “there was no evidence to support these claims and that this inflammatory rhetoric is harmful to our democracy.”

Judge Starr, the special prosecutor who penned the famous Starr Report about Bill Clinton’s sexual scandal that led to the impeachment of Clinton, hit back and said, “the vast majority of these cases were rejected for rightly-stated procedural reasons, as opposed to a merits-based or substantive-based evaluations. The Supreme Court’s unanimous rejection of the bill of complaint filed by the Texas Attorney General ... was based upon the legal concept of standing. You just don’t, Texas, have standing to object to what happened in Wisconsin or Pennsylvania or whatever. And that is a reasonable ruling. There are those who would quarrel with it, in that we are a United States of America, and if something bad happens in one state that ends up having an effect on other state, we have such respect for our states as sovereign entities within our Union, that the argument is I think, quite reasonable. And I think others think it’s quite reasonable that at least the matter should have been heard under the original jurisdiction. I think that’s a key example.”

Importance of Honesty and Fair Election

Judge Star was the first witness to speak. He said, “This bears repeating, honesty in the electoral process is fundamental to the social bonds that unite us as a free people, echoing the chairman’s opening statement, and not surprisingly, the Supreme Court of the United States has severely warned about the dangers and the corrosive effects of dishonesty.”

Commissioner Palmer next explained the role of the U.S. Election Assistance Commission in his testimony, “As the only federal agency completely dedicated to election administration, the EAC is charged with facilitating secure, lawful, and assessable elections. Under the Help America Vote Act, the EAC has focused on assisting state and local election officials. We are a bipartisan agency that recognizes the authority of states to conduct federal elections, and that is a cornerstone of our representative democracy.” He said the EAC has a voluntary program to certify voting machine manufacturers and they “recognize the need to do more than ever to strengthen the confidence and the integrity of our elections.”

Senator Johnson categorized voter irregularities into three main categories; 1) lax enforcement or violations of election laws and controls; 2) allegations of fraudulent votes and ballot stuffing; and 3) corruption of voting machines and software that might be programmed to add or switch votes. Most of the testimonies by Trump’s lawyers centered on these topics.

Jesse Banal, the Trump lawyer responsible for the legal affairs of fraud evidence in Nevada, said that their legal team was not allowed to see any backup paper ballots or given access to any of the voting machines. When they filed a lawsuit, the judge gave them only three days to prove their case, and refused to accept any evidence after that, despite the 4,000 non-citizen votes they had discovered.

He also said that they invited forensic experts all the way to Nevada who could discover any irregularities if being allowed to examine the machines. But again, they weren’t even allowed near or to have any forensic audit of it. “We ... [were given] nothing that could have given us any transparency, because transparency is not political,” he said.

James Troupis, another Trump lawyer from a small law firm investigating election fraud in Wisconsin, said at the hearing that the reason why no big law firms are involved in Trump's case is because they fear retaliation from the Democrats, as the cancel culture and the environment “that has been created by the left that has intimidated lawyers so they can’t be here.”

Troupis also said, “Let’s be honest, that’s what’s going on. And so that’s why the public doesn’t trust this outcome. It’s not about the president, it’s about what the other side is doing to intimidate and force people not to listen, not to take the evidence. I’ve heard lots of fancy words here today, but if you give transparency, if you let the issues come out, and I’ve represented Republicans and I’ve represented Democrats, and at the end of the day, lawyers do their job when it is at the open and we are able to present the evidence.”

He added that despite all the obstacles they had met, they were able to recruit 4,000 volunteers from everywhere in the country to come to Wisconsin to participate in the recount process, including more than 1,000 from the Biden campaign.

Representative Ryan presented what happened in his state, “The mail-in ballot system for the general election in 2020 in Pennsylvania was so fraught with inconsistencies and irregularities that the reliability of the mail-in votes in the Commonwealth of Pennsylvania is almost impossible to rely upon. The evidence of these violations of the Pennsylvania election laws, as enacted, the election security safeguards, and the process flaws include things such as actions by the Pennsylvania Supreme Court, which undermined the controls inherent in Act 77 of 2019. The controls, which were undermined included, on September 17th, 2020, the Supreme Court unilaterally extended the deadline for mail-in ballots to be received to three days after the election. They mandated that the ballots mailed without a postmark would be presumed to be received, and allowed the use of drop boxes for collection votes. And then on October 23rd, 2020 upon a petition from the Secretary of the Commonwealth, ruled that mail-in ballots need not authenticate signature for the mail-in ballots. Thereby treating in-person and mail-in voters dissimilarly, and eliminating a critical safeguard against a potential election fraud.”

Krebs, who called the 2020 vote “the most secure in American history” before being fired by President Trump, was the last witness to speak. He repeatedly stressed the unparalleled security of the election. He maintained that “the 2020 presidential election is the most secure election in the history of the United States,” and that “there is no possibility of foreign interference.”

Democratic senators gave all of their questions to Krebs. In response to one question, Krebs called the recent 23-page audit report on the forensic audit of Dominion voting machines in Michigan's Antrim County a “rumor” and denied the report’s claims of 68% error rate and deletion of the security logs of this year, despite valid and careful examination of the machines indicated otherwise.

On the same day of the hearing, a hand recount in Antrim County confirmed President Trump as the winner by nearly 4,000 votes, after alleged 3,000 more votes by Biden on election night. This fact was a rebuttal to Krebs' denial of election fraud.

“The Danger of One Voice from Mainstream Media”