(Minghui.org) On December 11, the U.S. Supreme Court rejected the Texas lawsuit against Georgia, Michigan, Pennsylvania and Wisconsin for unconstitutional election results. The high court's refusal to hear the facts of election fraud has left 74 million legal Trump voters disappointed. Hundreds of thousands of people rallied around the country to make their voices heard and to show solidarity with President Trump in his fight for a fair election.

President Trump took a helicopter to the West Point Military Academy to watch the annual Army Navy football game. When he flew over Washington D.C., he was cheered by the rally-goers. After arriving at the Military Academy, he was warmly welcomed by the military academy officers. After the thunderous applause, the officers chanted, “USA, USA, USA.” Morale was high and it was a touching scene.

However, the gloom of election fraud has not lifted from the minds of the general public. On Monday, December 14, all 538 electors voted in the Electoral College, calling the election for Trump's opponent, despite mounting evidence of election fraud. 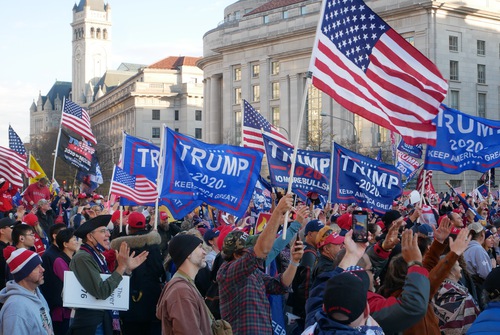 On December 12, 2020, hundreds of thousands from all over the United States gathered in Washington DC for a “Stop the Steal” rally.

Lack of Moral Compass Reflected in Disregard for Election Fraud

On the evening of the 11th, two lawyers from the Trump campaign legal team responded to the high court's decision. When interviewed by Newsmax. Rudy Giuliani said “the fight is not over.” Jenna Ellis condemned the “failure across all three branches of government” and said the “executive branch...changed the rules, and we know that...”

Newsmax host Grant Stringfield said that he believed that Trump's opponents had their eye on him from the very beginning, which is why the courts and federal agencies declined to investigate clear evidence of voter fraud. At the end of the day, they just don't want President Trump to stay in Washington because he has uprooted their deep state, their vested interests, and their bureaucratic power class.

Many people have come to see that after the morality of a society is corrupted by the pursuit of vested interests, the democracy and laws that they admired and advocated have become the puppets of the interest groups. Democracy and law then no longer uphold the Constitution and safeguard the rights of the people. Morality and conscience are the fundamental solutions.

After a lot of evidence and sworn testimonies surfaced, many people still refuse to search for or face the truth, using excuses such as “the mainstream media didn't report on election fraud, so there must be no evidence.” For people with such a mentality, they may appear naive on the surface when in fact they may have chosen to avoid facing the inconvenient truth of election fraud. But does the truth cease to exist just because people avoid it? Will justice and conscience of society not be harmed if people avoid the truth? Will the grave consequences of election fraud not fall on people if the wrong person is elected and leads the country down the wrong path?

Many people are aware of two facts: First, in the past three decades, the deep state and many elites on Wall Street have gained tens of billions or hundreds of billions from the Chinese market. Second, the owners of the mainstream media have long ceased to be media people who are responsible for societal morality and ethics, and have long since transformed themselves into beneficiaries of globalization and big government, and into a special interest group profiteering from cheap labor and the purchasing power of people.

These two facts are the main reasons why the deep state government and Wall Street, in the past several decades, have tried so hard to manipulate the U.S. government to cooperate with the Chinese Communist Party, which also explains why the mainstream media has been suppressing Trump, who has advocated protecting U.S. national interests, since he took office.

Deep state and Wall Street elites, although they have raked in enough windfall profits and become prominent world players, they still have the insatiable desire to make more money. They think that by taking out Trump, who advocates growing American manufacturing and making America great again, they can continue to join forces with the Chinese Communist Party and extract more profit from China, where labor is cheap. They think that the Chinese Communist Party will continue to work as supervisors and managers for them and manage China’s cheap labor to generate value for them. In fact, deep state and Wall Street elites have failed to see through the Chinese Communist Party's ambition to dominate the world.

-Communist ideology is the main culprit

Trump, on the other hand, is an advocate of making America strong again, and his efforts are centered on reviving and growing American research, manufacturing, trade, finance and military, and restoring the traditional American concepts of family, faith, and morals.

This is the opposite of what the communists, far left, the deep state and Wall Street advocate. To put it simply, as a black man who attended a Trump rally in Georgia two weeks ago said, the Democrats want people to be poor, and the Republicans teach people how to be rich. So Trump represents tradition and patriotism, while the far left and interest groups advocate cooperating with the Chinese Communist Party, thus enabling the latter to dominate the globe.

Therefore, this 2020 election, the deep state and Wall Street forces have long made it a unanimous goal to bring down Trump, something they have been unable to for the past four years.

They did not cheat on a whim in the middle of election night, but they had planned and organized well ahead of time, and did not hesitate to publicly restrict the speeches of the President and as well as Americans.

Among other things, their blatant and widespread introduction of Dominion voting machines to implement the 2020 U.S. election is an example of prior organization and planning.

The democratic party candidate himself said, “We have put together I think the most extensive and inclusive voter fraud organization in the history of American politics.”

He has never denied or clarified his words. Does this need to be investigated? There are other major issues involving the eligibility of candidates, and why does the government not investigate all of them?

While appearing on a talk show on November 19, Obama was asked what'd happen if an unnamed person, referring to Trump, were trying to hide in the White House. He replied, "Well, I think we can always send the Navy SEALs in there to dig him out." Was Obama just joking with the host or explicitly delivering a threatening message to Trump?

The Dominion Machines Aiming to Seize the Territory of Others

On Monday, December 14, the 13th Circuit Court of Michigan held a hearing, which sounded that it'd allow the deposition report of the investigation of Dominion, which was not allowed to be made public before the Supreme Court rejected the Texas lawsuit last Friday, to be made public. The hearing was still evasive, omitting the most important fact, which is that the Dominion backdoor program directly counted a certain percentage of the Trump votes in the name of his opponent.

This is why Dominion machines were not certified in Texas, and this is why dictators in authoritarian countries like Venezuela used them. To put it bluntly, whoever controls the machines gets the votes needed to win, so before the votes are counted, it has been determined beforehand who'd win, and the voters' choice doesn't matter at all! The name of this blatantly fraudulent machine is "territory" or "dominion" (Dominion). Is it a metaphor for the intention to use fraud to steal election results and seize other people's territory?

-the U.S. is not a country, but just various interest groups;-there is nothing money cannot accomplish: if one pile of banknotes does not work, two piles will do;-have you seen “The Godfather”? We haven't put a horse head in your quilt yet;-the United States is controlled by the deep state, and it is the various business groups, those graduates from prestigious schools who work in those groups, whom Di is famous for being able to “fool” with money.

For those U.S. elites who have made a lot of money from China today, their greed is never satisfied. But their money may be earned back by China's financial market, resulting in losses for them. They may have no clue on what kind of financial rules China has for capitalists. They may not know what the ultimate goal of the Chinese Communist Party is. Who can guarantee that the Chinese Communist Party, which flatters those elites today and gives them huge profits, will not go after them tomorrow to harm them. There have been too many lessons from the past, where the Chinese Communist Party uses a certain group of people for its own benefit, only to ditch them after deeming them to be of no more use.

The hard-working, intelligent Chinese have suffered more than 80 million unnatural deaths in just fifty years since the Chinese Communist Party came to power in 1949, and that number does not even include the large number of people who died from the 2003 SARS and 2020 coronavirus epidemics.

When the Chinese Communist Party gains the economic power to dominate the globe, that is the day when good people in the world face the grave consequences. If we want to stop that day from coming, we must firmly declare war on the Chinese Communist Party today and fight to the end, instead of appeasing it and enabling it to grow stronger to harm the world. And whoever has the conviction and ability to lead the United States to do so, we should all know in our hearts and support him.

God bless America! Let all kindhearted people unite together, get rid of all notions and illusions, and stand on the side of the divine. Let the mercy and glory of God be shown to all mankind through America.