(Minghui.org) Today's news from China includes incidents of persecution that took place in 14 cities or counties in 9 provinces, where at least 35 practitioners were recently persecuted for their belief. 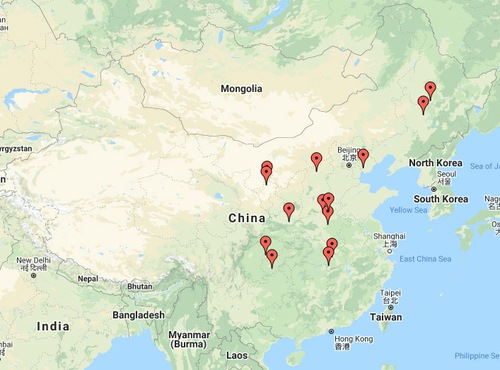 Ms. Ye Sanmei from Yingshan County in Nanchong City was arrested in the Xinjiang Autonomous Region. Her home in Yingshan was ransacked and a printer, Falun Dafa books, and audio and videotapes were confiscated.

Her parents, who do not practice Falun Gong, were arrested and detained for several days.

Ms. Jiang Shuhua was arrested on May 26, 2020. She was taken to the Shengyang Police Station for interrogation. Cui Zhanbao, head of the police station, extorted 20 boxes of melons, worth more than 2,000 yuan, from her family.

Ms. Jiang was arrested again on June 5 for talking to people about Falun Gong in the Daqingzui Market. She was taken to the Changchun City's No.4 Detention Center and transferred to the Dehui Detention Center on August 29.

Shuocheng District Police Department deputy Liu Wenye and other officers broke into Ms. Li Curong’s home on the morning of October 4, 2020. They arrested her and her two daughters and ransacked the place. They confiscated two computers, two printers, seven Falun Dafa books, printed materials, and over 20,000 yuan in cash with truth clarification messages printed on them.

Her daughters were released the next day. Ms. Li Cuirong is still being detained.

Ms. Wang and Ms. Zhou were held in the Kaifeng Detention Center for six months before they were tried.

Ms. Wang Maixian was sentenced to two years and was taken to Xinxiang Women's Prison. She was released in August 2020. Ms. Zhou Jinfang’s situation is being investigated.

Ms. Yan Aiying, who is over 60, was arrested at home on the morning of July 28, 2020, by officers from the Jiaozuo Police Department. They ransacked the place, and confiscated Falun Dafa books, a picture of Falun Gong's founder, and other personal belongings. She was taken to the Jiaozuo Detention House and detained for 10 days.

Jiaozuo Municipal Bureau of Human Resources and Social Security have suspended pension payments and canceled retirement benefits for Falun Gong practitioners who have worked in government institutions and were sentenced to prison after 2012. This is being done according to directives from higher authorities.

Mr. Zheng Jiajin retired in 1998. He was arrested in November 2014 and sentenced to seven and a half years in prison. He was bailed out in 2017 for medical treatment.

His pension was suspended by the Zhengzhou City's Social Insurance Bureau in September 2020 and he was told to return the pension payments that he received between November 11, 2014, and August 2020.

The director of Xihuayuan Police Station threatened Mr. Shi Xiufeng's wife, saying that he would harass her sisters if she didn’t cooperate.

Officers from the Daowai District Police Department notified Mr. Liu Hui’s family on the afternoon of September 30, 2020, that he had been arrested. His home was ransacked, and 5000 yuan was confiscated.

Mr. Song Zhi was reported to the police because Falun Dafa informational materials were found when he was moving house. He is being held in a detention center and may be tried this month.

Mr. Liang Yi was arrested by Yujiatou Police Station officers on the afternoon of September 29, 2020. He is being held in the Caidian District's Dahanyang Base Detention House.

Mr. Ma Xiongde and his wife Ms. Zheng Fengying from the Litong District have recently been repeatedly harassed by officers from the Chaoyang Police Station and the police department and personnel from the judicial bureau, and Chaoyang Community. They ordered the couple to sign a statement promising not to practice Falun Gong. They refused, so their family members were forced to sign on their behalf.

Ms. Yang Zhilian was harassed at home on September 17, 2020, by Ling Min from the Jiatan Community in Xianfeng Town, the Jiangjiangjin District. She was ordered to sign the three statements, but she firmly refused.

Ms. Yang’s husband managed to escape when officers from the Jiangjin District Police Department tried to arrest him in April 2019. His whereabouts are unknown.

Mr. Wang was harassed multiple times by the deputy director of the town Party committee and the village director. He was ordered to write the three statements, but he firmly refused.

He was told he had been formally placed under arrest on September 28 and was taken to the No.1 Detention Center in Tangshan City. However, he was not admitted because of high blood pressure. Mr. Wang was taken home that afternoon and is now under house arrest.

Mr. Lei Shengping has been missing for nearly half a month. His whereabouts are unknown.

Ms. Fan Jinzhi and her daughter Ms. Jia Lina have been harassed and arrested multiple times by police officers in the Weidu District since August 2020.

Feng Yu from the domestic security division and officers from the Weidu Police Department and the Wuyi Road Police Station broke into Ms. Fan's home on August 17 and ransacked it. Ms. Fan, Ms. Jia, and the seven-year-old granddaughter were taken to the Wuyi Road Police Station around 6:00 p.m. Ms. Jia’s home was ransacked and her Dafa books, a photo of Falun Gong's founder, an audio player, and a cell phone were confiscated. All three were released at around 1:00 a.m.

The same group of officers went to Ms. Fan’s home a week later. They confiscated a copy of Zhuan Falun and tore off several New Year posters from the wall. They attempted to put Ms. Fan under 10-day detention and took her to have a physical exam. She was released because the results showed that she was in extremely poor health.

They broke into Ms. Jia’s home again on September 30 and ransacked it. She was arrested and taken to the Xuchang Detention House.

Ms. Liu Ying, around 50, was an elementary school teacher in Yanling County. She was arrested in August 2020 and has been held in the Xuchang Detention Center for over a month.