(Minghui.org) Today's news from China includes incidents of persecution that took place in 11 cities or counties in 8 provinces, where at least 36 practitioners were recently persecuted for their belief. One of the practitioner's whereabouts are currently unknown. 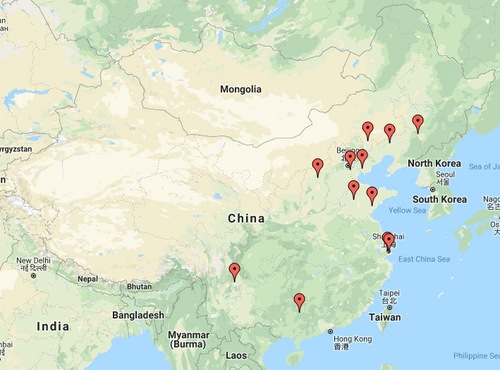 Ms. Lu Huibi, 54, was followed by a Mengshan County plainclothes officer in mid-March, 2017, when she was distributing Falun Gong fliers in Mengshan, Wuzhou City. She was arrested at home on April 6, 2017, by Liu Xiangzheng from the Lipu County Domestic Security Division, Wei Dingshen from the Mengshan Domestic Security Division, and other officers. Her home was ransacked. She was taken to the Mengshan Detention Center.

Ms. Lu was tried in the Mengshan Court on December 12, 2017, and sentenced to three years in prison on June 11, 2018. She appealed, but the Wuzhou Intermediate Court upheld the original verdict on September 5, 2018.

Mr. Yang Guoping and Ms. Jiang Xianhe were arrested on August 6, 2019. The detention center refused to take them, and the Procuratorate returned their cases to the police. The police, however, still refused to release them.

Mr. Yang was sentenced to a year in prison and fined 3,000 yuan, after the case officer’s insistence.

Ms. Jia Caixia from the Hebei Neighborhood was arrested on August 13, 2019, for talking to people about the persecution of Falun Gong. Her whereabouts are unknown.

Ms. Qiu Caiqun, from Yanmin Road in the Pudong District, was arrested by officers from the Pudong Domestic Security Division and the Huamu Police Station on August 8, 2019. She is being held in the Pudong First Detention Center.

Ms. Li remains in detention, while the rest have been released.

Ms. Wu Fengzhen, 75, was arrested by officers from the Dongji Police Station on the morning of July 3, 2019, for talking to people about the persecution of Falun Gong. She was taken to a detention center, but the staff there refused to admit her because she had high blood pressure.

The police released Ms. Wu on bail, but only after extorting 10,000 yuan from her daughter. Officers took Ms. Wu to a detention center again a few days later, and this time she was admitted.

Mr. Yao Jinhong was arrested on the afternoon of August 8, 2019.

Ms. Feng Xin, 58, from Gaozhuang Village, and Ms. Cao Fengping, 56, from Mawan Village, were arrested by officers from the Gaozhuang Police Station on August 12, 2019, for talking to people in Xujianyu. Their homes were ransacked.

Ms. Zhong Falan from Huangtuan Village was arrested by the Zhucheng City police on the morning of August 4, 2019, for talking to people about the persecution of Falun Gong.

Ms. Li Xueqin, 52, was arrested at her shop, the Huaqiang Grain, Oil, and Seasoning Store, by officers from the Zhucheng Domestic Security Division on the morning of August 8. She is being held in the Weifang City Detention Center.

Mr. Jia Cuiping, in his 70s, and Ms. Ma Ying were arrested at home by officers from the Jingyuannanlu Police Station in the early hours of July 31, 2019. Their homes were ransacked. The officers then went to Mr. Jia’s son’s home, who does not practice Falun Gong, and ransacked the place.

Ms. Gai Ran and her daughter-in-law Ms. Meiying Yuanping, from the City Fertilizer Factory Neighborhood, were arrested on the same day.

Mr. Zhang Xiangrong was arrested at home on the afternoon of August 11, 2019. Three officers from the Yuanqu Police Station deceived him into opening the door, and handcuffed him after they entered his home.

Mr. Zhang is being held in the Langfang City Detention Center.