(Minghui.org) European Falun Gong practitioners who gathered in London for the 2019 Falun Dafa Experience Sharing Conference on August 31 participated in activities throughout Central London after the conference. The activities, held at major London landmarks, introduced the practice to the public and raised awareness of the 20-year-long persecution of Falun Gong in China.

Below are reports from several of the activities in Central London – at Trafalgar Square, in front of the British Government offices at 10 Downing Street, near the British Museum and at Leicester Square. Both Londoners and visitors were interested and stopped to learn more about Falun Gong and the ongoing persecution in China. Many passersby expressed shock about the brutality in China and readily signed petitions calling for a stop to the human rights atrocities. 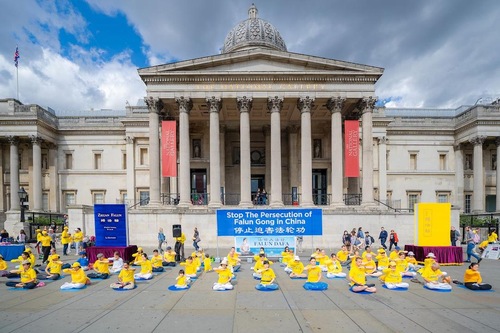 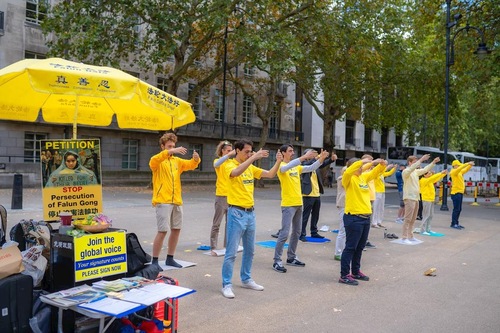 Practitioners do the Falun Gong exercises outside the British Museum on September 1, 2019. 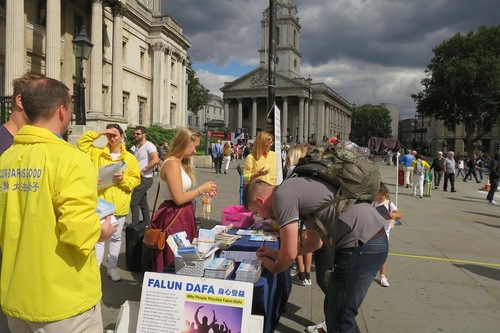 Tourists sign petitions at Trafalgar Square calling for an end to the persecution in China.

Borget, an IT professional, stopped to talk to Falun Gong practitioners as she passed 10 Downing Street on September 1, 2019. She signed a petition calling to end the persecution in China and said that the suppression, and particularly the Chinese regime's forced organ harvesting from Falun Gong practitioners and other prisoners of conscience, is very disturbing. “Thank you very much for telling us this information because it is a very important matter,” she said. 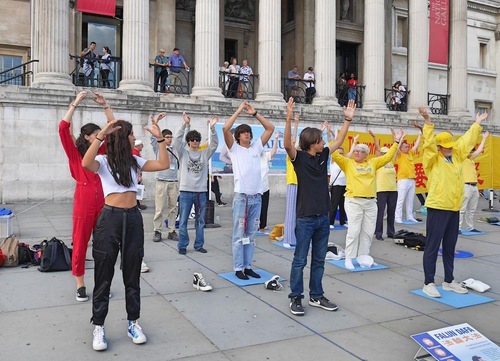 A group of Italian students try out the exercises. 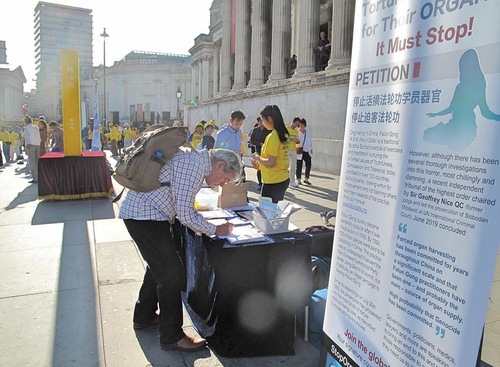 Coner signs a petition calling on the British government and international society to help stop the tragedies in China.

Coner is a carpenter who often comes to London. Impressed by the peaceful meditation of Falun Gong practitioners at Trafalgar Square, he took a picture with his cell phone and then signed a petition to show his support. He remarked that more and more people have recognized the viciousness of the Chinese Communist Party (CCP), and said he believes that it is critical to expose it. 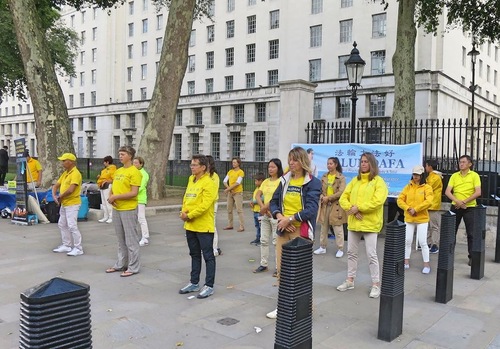 Philip from Liechtenstein said he was shocked by the mistreatment that practitioners are subjected to in China. He commented that practitioners just want to lead peaceful and happy lives by following the principles of Truthfulness-Compassion-Forbearance. “But they were treated so badly,” he said while signing a petition. “I wish you success.”

Several Chinese residents and tourists talked with practitioners out of curiosity. Two men from China who are working in Britain joined the practitioners in doing the exercises. One of them learned the sitting meditation while the other man, who said that his surname was Li, took pictures. A practitioner explained to them how the CCP has harmed innocent Chinese people throughout its numerous political campaigns, including the ongoing suppression of Falun Gong. Mr. Li agreed to renounce his membership in the Young Pioneers – one of the CCP’s junior organizations – while his companion said he had already done so.

Shao, a shop owner, said he had heard about the persecution in China, but did not know much about it. A practitioner chatted with him for a long time and explained the brutal torture practitioners are suffering for their belief, including being killed through forced organ harvesting. The practitioner told Shao that the CCP is doomed because of its bad deeds, and members of the Party will also have to face the consequences. Shao nodded and then agreed to renounce his memberships in the Young Pioneers and the Communist Youth League. 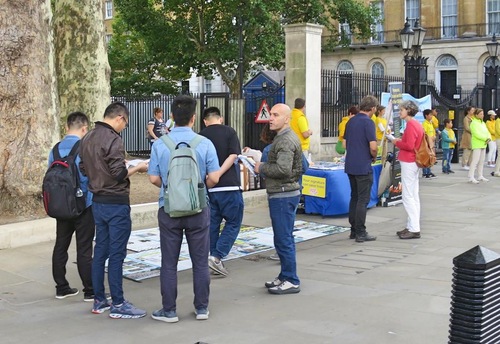 A group of young Chinese men talk with practitioners about Falun Gong.

In front of the U.K. Government headquarters at 10 Downing Street, a group of young Chinese tourists greeted two Western practitioners. The young men listened attentively as the practitioners explained the benefits of Falun Gong and the nature of the persecution by the CCP. The young men then went on to read the posters about Falun Gong. Before leaving, they smiled and thanked the practitioners. Several of them nodded when they were asked if they would separate themselves from the Chinese communist regime.

Two Chinese women at Trafalgar Square stayed for a long time watching practitioners perform the exercises. One of them said she was drawn to the scene, as she had never seen anything like it before. A practitioner talked to them about the reality of some of the defamatory propaganda about Falun Gong that has been spread by the CCP, and also told them how to overcome China's firewall to access overseas information. The women read the materials from the practitioner and said they would indeed download the software to access uncensored information.

Fu, who works in Britain, also lingered at Trafalgar Square for a long time. He first watched the group meditation and then listened to the performance of the Tian Guo Marching Band. He had read Zhuan Falun, the main teaching of Falun Gong, and asked several questions. “As far as I can tell, practitioners are nice and peaceful people. And I enjoy being here,” he remarked.