(Minghui.org) Falun Dafa, also known as Falun Gong, is a meditation system based on Truthfulness, Compassion, and Forbearance. To celebrate the Moon Festival, practitioners and their family members have sent thousands of greetings to Minghui. Because of their courage in supporting innocent practitioners despite the persecution in China, these family members have also witnessed miracles and blessings.

After overcoming the internet blockade with software, some employees of a media company in Beijing were able to watch a video titled Coming for You, a documentary about several practitioners and how their lives were changed by Falun Dafa. Impressed by these stories and practitioners’ perseverance in protection their belief, these employees became supportive of practitioners and renounced the Chinese Communist Party (CCP) organizations they had been affiliated with. 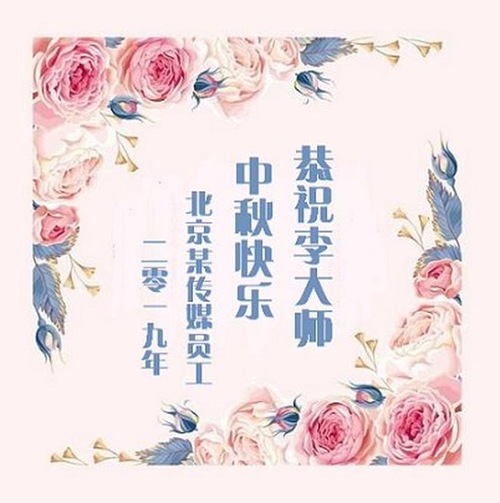 Greetings from a media company in Beijing

“Many of us have experienced miracles since then,” they wrote. “Couples that were sadly childless for many years are now parents; some who encountered an electric shock in an accident were totally fine after saying ‘Falun Dafa is good,’ ‘Truthfulness-Compassion-Forbearance is good;’ some had brake problems, but nonetheless remained safe.” These employees knew the blessings were from Falun Dafa and its founder, Mr. Li Hongzhi, and they are very grateful.

One practitioner in Tangshan City, Hebei Province, went back to her hometown recently, where she told her friends and relatives the real story of Falun Dafa and debunking the CCP’s hate propaganda.

“One of them had stomach issues and could hardly eat anything. As a result, her weight dropped from 65 kg (about 140 pounds) to less than 35 kg (about 80 pounds),” recalled the practitioner, “One afternoon I visited her and told her the facts about Falun Dafa and recommended that she recite ‘Falun Dafa is good, ‘Truthfulness-Compassion-Forbearance is good.’ After reciting the phrases that night, she felt much better the next morning and could eat normally.”

Another relative suffered from the aftereffects of a stroke. As a result, she had facial muscles that didn’t work and difficulty speaking and walking. She could not take care of herself and needed intravenous injections. Her children could see no hope and cried over her condition.

“I told her to recite the phrases and asked her children to do the same. When I visited her again the following morning, her face was back to normal, and she was able to speak clearly and even clean the house,” wrote the practitioner. Eventually, the relative fully recovered and so did her husband, who’d also had a stroke. Whenever they met the practitioner, the couple would thank her and, more importantly, Master Li. 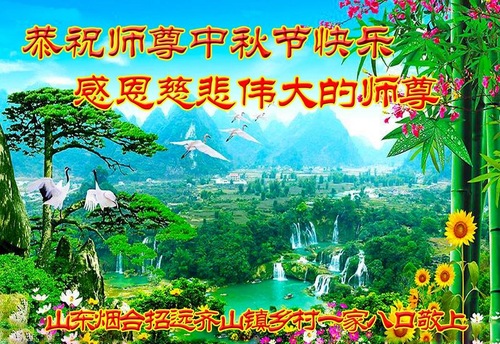 Greetings from a family of 8 in Zhaoyuan City, Shandong Province

“Some of our children work in the government as law enforcement officers, and our grandchildren are college students. All of them admire Falun Dafa for bringing them happiness. All 8 of us wish Mater Li a Happy Moon Festival,” they wrote.

Beijing Resident: Car Started Itself But Caused No Harm

Mr. Wei, who lives in Beijing, went his family on vacation last summer. It was blazing hot with temperature reaching over 50C (about 122 F). After the family went into a restaurant for lunch, a waiter noticed a car in the parking lot had started itself and was smoking. He alerted the diners and Mr. Wei realized it was his car.

“All of us were in panic and a security officer told us not to get too close because there could be a fire or an explosion. Just then, my mother remembered a Falun Dafa practitioner had told her to recite ‘Falun Dafa is good’ and ‘Truthfulness-Compassion-Forbearance is good’ when encountering danger, so she did. With that, the car engine stopped, and when we checked the car later, everything was normal,” he wrote. 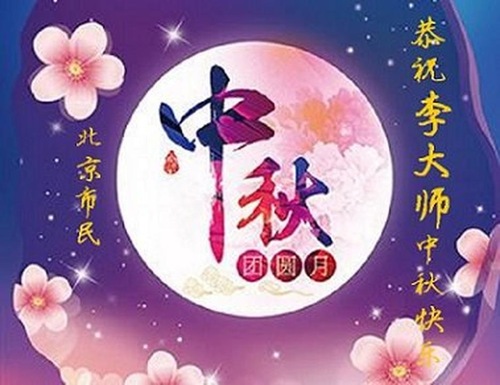 Mr. Wei from Beijing is grateful for Falun Dafa’s blessings.

Mr. Wei said the other diners and restaurant staff who witnessed this were also surprised. The family have now all quit the CCP organizations and their gratitude is beyond words. “We really want to thank Master Li and hope more people can benefit from Falun Dafa like we have,” he added.

“When there was one one around to help us, Falun Dafa saved us and showed us the way,” wrote a young woman in Shandong Province in her greetings to Master Li submitted through Minghui.

Living in Yantai City, the woman said her parents had practiced Falun Dafa for more than 20 years. On July 26, 2019, she, her husband, and their two young children went to celebrate her nephew’s birthday. In a newly-purchased pickup truck, they ran into a detour due to construction. “Although it normally only takes about two hours, the GPS led us to nowhere, and even at dusk, we did not know where we were,” she recalled.

A passing motorcyclist offered to guide them. “But his motorcycle was too fast and we could not keep up with him on the rural road. Shortly after he was out of sight, we were in a hurry and our car fell into a ditch on the side of the road,” the woman wrote. She called her mother in tears and told her what had happened. “Remember the phrases I told you to say?” her the mother reminded her. “Did you try that?”

No one passed by on the remote country road, and the woman was scared. Assured by her mother, however, she began to recite “Falun Dafa is good, Truthfulness-Compassion-Forbearance is good.”

Surprisingly, several people soon came down from a nearby hill and offered to help push the truck out of the ditch. Then they showed them the main road close by. While the family of four thanked these kindhearted locals, the woman knew it was Master Li who actually helped them. 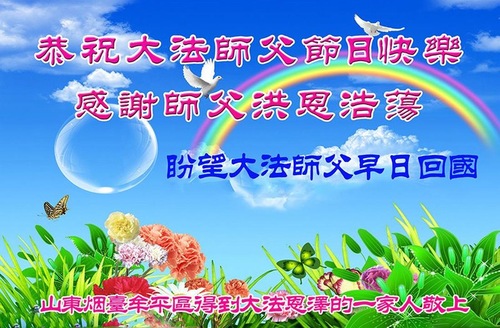 “Thank you, Master, for your compassion. We wish you a Happy Moon Festival,” wrote a young mother in Shandong Province.

And that what just one of the many miracles she experienced. She wrote: “From a young girl to a mother, I have witnessed how my parents have struggled over the past 20 years for their faith. At the same time, both my husband and I know, from the bottom of our hearts, that Falun Dafa is righteous and that Master Li is great and helps so many people around the world become better citizens. That is why we sincerely wish Master a Happy Moon Festival. I also wish all practitioners well.”